Udupi, Jan 5: The Udupi district police have booked five saffron activists including a prominent leader of Bajarang Dal for assault and attempt to murder charges.

According to the police, Bajrang Dal leader Mahesh Shenoy, Ganesh Pujari and three others attacked Sheikh Mohsin, a resident of Karkala, with sharp weapons at Banglegudde on the outskirts of the town on Thursday night without any provocation.

Mohsin, who had sustained grievous head injuries in the incident, has been hospitalised. He is said to be out of danger.

A while later, the same team assaulted two more Muslim men - Mohammad and Salman - at Banglagudde.

Three separate cases have been registered at jurisdictional Karkala police station. The police have lunched a manhunt to nab the miscreants. 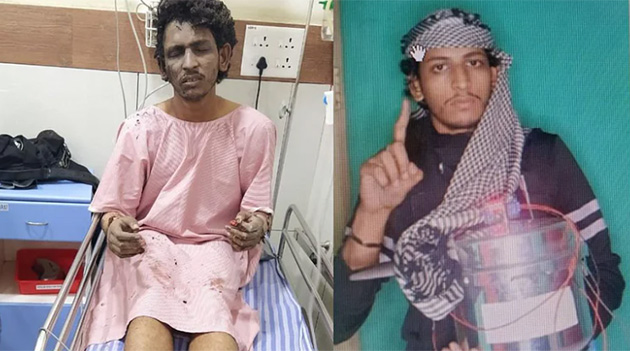 Mangaluru, Nov 24: An unknown outfit Islamic Resistance Council (IRC) has reportedly claimed responsibility for the Mangaluru blast on November 19, saying that one of its 'Mujahid brothers Mohammed Shariq' attempted to attack a 'Hindutva Temple in Kadri.'

The Additional Director General of Police (Law and Order) Alok Kumar said the police are verifying the genuineness of the organisation.

"We the Islamic Resistance Council (IRC) would like to convey the message: One of our Mujahid brother Mohammed Shariq attempted to attack the Hindutva Temple in Kadri (in Dakshina Kannada district), a bastion of the Saffron terrorists in Mangaluru," the message which has gone viral in social media said.

It further said, "Although this operation didn't meet its objectives, we still consider it a success from a tradecraft and tactics point of view as the brother in spite of being wanted and being pursued by the state and central intelligence agencies, was not only able to successfully evade them but even prepared and mounted an attack."

For the 'premature explosion' which led to Shariq's arrest, the outfit said such possibilities exist with 'all military and subversive operations.'

The outfit even warned the ADGP Alok Kumar.

"As for those rejoicing at the arrest of the brother, especially the likes of ADGP Alok Kumar, we say 'Your joy will be short-lived and you shall reap the fruits of your oppression soon. We have you in our sights and it is just a matter of what and not if we will get to you."

Regarding the attack, the IRC said they are forced into this war and the path of resistance by the fascists and "We are only responding to the worst forms of state terrorism."
"We are only retaliating because an open war has been declared upon us, because mob lynching has become a norm, because oppressive laws and legislations are passed to suppress us and interfere in our religion, because our innocents are languishing in prisons, because public spaces today reverberate with call of our genocide," the outfit said.

Reacting to the viral post, Alok Kumar said, "We are verifying the genuineness of the avowed organisation and veracity of the contents of the post."

On November 19, Mohammed Shariq, who was at large, was travelling in an autorickshaw with a cooker which exploded in Mangaluru injuring him and the driver. Police called the blast an act of terror.

According to police, Harish and Goutham hurled a stone at Zaheer. Police have stated that there was a skirmish between them.

In another incident, one Rizwan was stabbed on his hand by an unidentified persons in front of a general hospital in Bhadravathi. Bhadravathi police registered a case and the investigation is on.