The cumulative global toll of confirmed cases has now reached 8,708,008, as stated in the report.

The United States continues to be worst affected by the contagion with the highest count of cases and fatalities -- 2.2 million and 118,895, respectively.

The novel coronavirus was declared a pandemic by WHO on March 11. 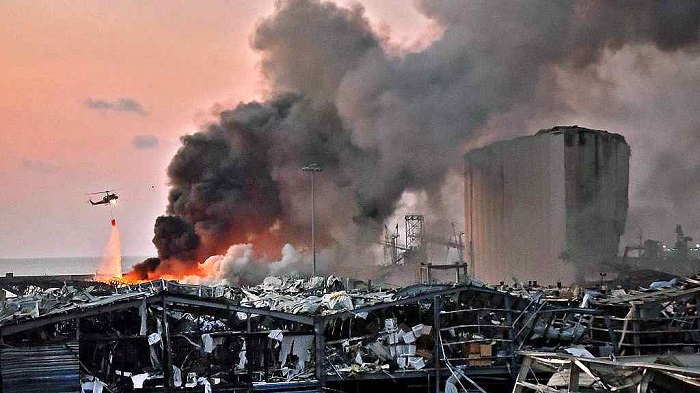 Paris, Aug 5: French President Emmanuel Macron on Tuesday said France will deploy a civil security detachment and several tonnes of medical equipment to Lebanon, whose capital was hit by an explosion that left over 70 people dead and thousands injured.

"Emergency doctors will also reach Beirut as soon as possible to strengthen hospitals. France is already engaged," the French President said in a tweet.

US Secretary of State Mike Pompeo, also extended his deepest condolences to all those affected by the "massive explosion at the port of Beirut."

"We are closely monitoring and stand ready to assist the people of Lebanon as they recover from this tragedy. Our team in Beirut has reported to me the extensive damage to a city and a people that I hold dear, an additional challenge in a time of already deep crisis.

We understand that the Government of Lebanon continues to investigate its cause and look forward to the outcome of those efforts," he said in a statement.

UK Prime Minister Boris Johnson said his country is ready to provide support in any way it can.

"The pictures and videos from Beirut tonight are shocking. All of my thoughts and prayers are with those caught up in this terrible incident. The UK is ready to provide support in any way we can, including to those British nationals affected," Johnson said.

Israeli people share the pain of their Lebanese neighbours after a devastating blast in the port of Beirut and reach out to offer their aid, Israeli President Reuven Rivlin said on Tuesday.

"We share the pain of the Lebanese people and sincerely reach out to offer our aid at this difficult time," Rivlin said on Twitter.

Over 70 people have been killed while thousands of others were wounded in the massive explosion on Tuesday in Beirut which shattered buildings and caused widespread damage.

Twitter apologises for mega crypto hack, says it is embarrassed and disappointed

Days after Twitter accounts of several billionaires were hacked to engineer a crypto scam, Twitter on Saturday said it is embarrassed, disappointed and, more than anything, sorry for what happened with some of its high-profile users as attackers successfully manipulated its employees and used their credentials to access internal systems, including getting through the two-factor protections.

In the first detailed summary of the "social engineering attack" via a crypto scam that hit at least 130 users this week, Twitter said for 45 of those accounts, the attackers were able to initiate a password reset, login to the account and send Tweets.

"We are continuing our forensic review of all of the accounts to confirm all actions that may have been taken. In addition, we believe they may have attempted to sell some of the usernames," the micro-blogging platform said in a statement.

For up to eight of the Twitter accounts involved, the attackers took the additional step of downloading the account's information via "Your Twitter Data" tool.

"We are reaching out directly to any account owner where we know this to be true. None of the eight were verified accounts," said Twitter.

The company said the attackers were not able to view previous account passwords, as those are not stored in plain text or available through the tools used in the attack.

"Attackers were able to view personal information including email addresses and phone numbers, which are displayed to some users of our internal support tools," informed Twitter.

In cases where an account was taken over by the attacker, they may have been able to view additional information, Twitter added, saying its forensic investigation of these activities was still ongoing.

"We are actively working on communicating directly with the account-holders that were impacted".

The company said it will soon restore access for all account owners who may still be locked out as a result of the remediation efforts.

The New York Times reported on Friday that the Twitter crypto scam can be traced back to a group of hackers who congregate online at OGusers.com, a username-swapping community where people buy and sell coveted online handles.

The report said that the Twitter hack is not from Russian, Chinese or North Korean hackers but was done by a group of young people, "one of whom says he lives at home with his mother".

Colombo, Aug 7: Sri Lankan President Gotabaya Rajapaksa's party and its allies won an overwhelming two-thirds majority in a parliament election, results showed on Friday, giving him the power to enact sweeping changes to the constitution.

The governing Sri Lanka Podujana Peramuna and its allies had won 150 seats in the 225-member parliament, according to the tally published by the election commission from Wednesday's vote.

Rajapaksa had sought a two-thirds majority in parliament to be able to restore full executive powers to the presidency, which he says are necessary to implement his agenda to make the tiny island economically and militarily secure.

He is likely to install his older brother and former President Mahinda Rajapaksa as the next prime minister. The brothers are best known for crushing the Tamil Tiger rebels fighting for a separate homeland for minority Tamils during the elder Rajapaksa's presidency in 2009.

On a congratulatory phone call from Prime Minister Narendra Modi of India, which is keen to check Chinese influence on its southern neighbour, Mahinda Rajapaksa vowed to deepen ties between the two countries.

"With the strong support of the people of Sri Lanka, I look forward to working with you closely to further enhance the long-standing cooperation between our two countries," he told Modi. "Sri Lanka and India are friends and relations."

The tourism-dependent nation of 21 million people has been struggling economically since deadly Islamist militant attacks on hotels and churches last year followed by lockdowns to slow the spread of the coronavirus.