Farrukhabad, Aug 20: Delivering babies outside the hospital or on way to the hospital has become a common occurrence in Uttar Pradesh.

In the latest incident on Sunday night, a woman was forced to deliver her child in the corridor of Ram Manohar Lohia Hospital, in full public view, after the doctors refused to admit her, saying there were no beds available.

The newly-born baby was lying in one end of the corridor, on what appears to be a piece of red cloth. A woman relative later picks up the baby.

According to reports, the woman was taken to the labour room in the hospital by the doctors on duty after she gave birth to her baby.

Monika Rani, the District Magistrate of Farukkhabad, said she has already ordered a probe into the incident.

"I have taken suo motu cognizance and ordered an enquiry. We will try and ascertain the truth behind the incident. If anyone is found guilty of negligence, we will take strict action," she said.

The Ram Manohar Lohia Hospital is the only specialised government hospital in Farukkhabad. It was in the news in 2017 too, when 49 babies died in a month there, just days after reports of child deaths at a hospital in Gorakhpur due to lack of oxygen.

Parents had blamed a shortage of medicine and oxygen for the Farukkhabad hospital deaths too. The state government, however, had denied it.

India has seen a 20 per cent fall in neonatal deaths -- deaths within the first month after birth of a child -- between 2011 and 2016, according to the World Health Organisation.

There has also been a 33 per cent improvement in survival rate among children between the first month and a year after birth, referred to as post-neonatal. But despite the improvement, 1 in 40 babies die during birth in India.

HCL Tech was the top gainer in the Sensex pack, surging around 5 per cent, followed by Tech Mahindra, HDFC duo, Reliance Industries, TCS, SBI and IndusInd Bank. On the other hand, HUL, Asian Paints, Maruti, Bajaj Auto and Nestle India were among the laggards.

In the previous session, Sensex ended 14.23 points or 0.04 per cent higher at 38,854.55, while the broader Nifty rose 15.20 points or 0.13 per cent to close at 11,464.45. Exchange data showed that foreign institutional investors bought equities worth Rs 1,175.81 crore on a net basis on Friday. Domestic equities opened on a positive note tracking positive cues from global markets and persistent foreign fund inflow, traders said.

Bourses in Shanghai, Hong Kong, Seoul and Tokyo were trading with gains in mid-day deals after Biopharmaceutical giant AstraZeneca and the University of Oxford on Saturday resumed trials for their coronavirus vaccine in the UK after the Medicines Health Regulatory Authority's approval. The human trials resumed days after a pause was announced in the trials after an adverse reaction in one of the participants. Meanwhile, global oil benchmark Brent crude was trading 0.35 per cent lower at USD 39.97 per barrel. 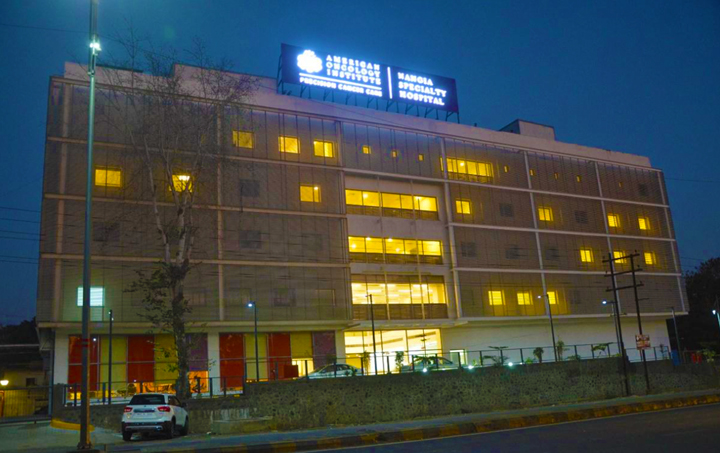 “Breast cancer is the most common cancer in women worldwide. Our clinic ensures, people understand the importance of regular cancer screening and benefit the state-of-the-art cancer treatment at an affordable cost. This will help us to treat patients sooner and with greater precision", says Dr. Amit Dhawan, Regional Director, American Oncology Institute, Nagpur.

As an introductory package, the Hospital is offering “Beat Breast Cancer Package”, which includes Clinical and Diagnostic examination (FNAC or biopsy, mammography or USG) for Rs 2000/- with free doctor consultation till September 30, 2020.

A strong team of doctors comprising of Surgical, Medical and Radiation oncologists, along with group of trained nurses ensures the patient receives the best medical care possible.

The team of clinical, paraclinical and healthcare operations experts pride themselves with the aim of closing the gap between standards of cancer care in South Asia and the developed cancer hospitals in the West. AOI provides comprehensive cancer management that is powered by clinical excellence, world class technology as well as best in class clinical pathways and protocols for treatment planning and execution, providing best in-class quality in cancer care across South Asia.

TikTok rejects Microsoft’s bid, likely to pick Oracle as 'tech partner' in US

Bytedance, the Chinese owner of TikTok, has reportedly chosen Cloud major Oracle over Microsoft to run its US operations as a ‘trusted tech partner’, multiple media reports revealed on Monday while an official announcement was still awaited.

According to The New York Times, ByteDance rejected the acquisition offer from Microsoft. However, it was unclear whether TikTok's choice of Oracle as a technology partner would mean that "Oracle would also take a majority ownership stake of the social media app".

This is different from an outright sale and appears to suggest Oracle will help run TikTok's US operations with its Cloud technologies.

In an official statement, Microsoft said its bid for TikTok operations in the US was rejected.

"ByteDance let us know today they would not be selling TikTok's US operations to Microsoft. We are confident our proposal would have been good for TikTok's users, while protecting national security interests," Microsoft said.

"To do this, we would have made significant changes to ensure the service met the highest standards for security, privacy, online safety, and combating disinformation, and we made these principles clear in our August statement. We look forward to seeing how the service evolves in these important areas," the tech giant added.

ByteDance has reportedly decided not to sell or transfer the algorithm that is behind TikTok to any other company. This was reported by South China Morning Post quoting sources as saying that while ByteDance will not give its source code to any bidder in the US, its tech team can develop a new algorithm in the US. The company has reportedly informed the same to authorities and potential bidders in the US.

After TikTok was banned in India in June, along with 58 other Chinese apps, the Donald Trump administration in the US increased pressure on the ByteDance-owned platform to sell its US operations by mid-September or face a ban.

According to NYT, Oracle has cultivated close ties with the Trump administration.

"Its founder, Larry Ellison, hosted a fund-raiser for Trump this year, and its chief executive, Safra Catz, served on the president's transition team and has frequently visited the White House".

"I think that Oracle would be certainly somebody that could handle it," he told reporters. Trump maintained there will be "no extension of the TikTok deadline".

Riding on new customer wins in both Cloud applications and infrastructure businesses, Oracle posted better than expected results for its FY21 first quarter results last week, generating $9.4 billion in revenue which was up 2 per cent compared to the same period last year.

"The tricks of economic bullying and political manipulation that the US played on non-American companies are tantamount to coercive robbery," said a Chinese Foreign Ministry spokesperson over the weekend.