The global death toll from COVID-19 has topped 5 million, nearly two years into a crisis that has not only devastated poor countries but also humbled wealthy ones with first-rate health care systems.

Together, the United States, the European Union, Britain and Brazil account for one-eighth of the world’s population but nearly half of all reported deaths.

The U.S. alone has recorded over 740,000 lives lost, more than any other nation. The staggering figure is almost certainly an undercount because of limited testing and people dying at home without medical attention, especially in poor parts of the world, such as India.

The death toll, as tallied by Johns Hopkins University, is about equal to the populations of Los Angeles and San Francisco combined. It rivals the number of people killed in battles among nations since 1950, according to estimates from the Peace Research Institute Oslo. Globally, COVID-19 is now the third leading cause of death, after heart disease and stroke.

Hot spots have shifted over the 22 months since the outbreak began, turning different places on the world map red. Now, the virus is pummeling Russia, Ukraine and other parts of Eastern Europe, especially where rumors, misinformation and distrust in government have hobbled vaccination efforts. In Ukraine, only 17% of the adult population is fully vaccinated; in Armenia, only 7%.

“What’s uniquely different about this pandemic is it hit hardest the high-resource countries,” said Dr. Wafaa El-Sadr, director of ICAP, a global health center at Columbia University. “That’s the irony of COVID-19.”

Wealthier nations with longer life expectancies have larger proportions of older people, cancer survivors and nursing home residents, all of whom are especially vulnerable to COVID-19, El-Sadr noted. Poorer countries tend to have larger shares of children, teens and young adults, who are less likely to fall seriously ill from the coronavirus. 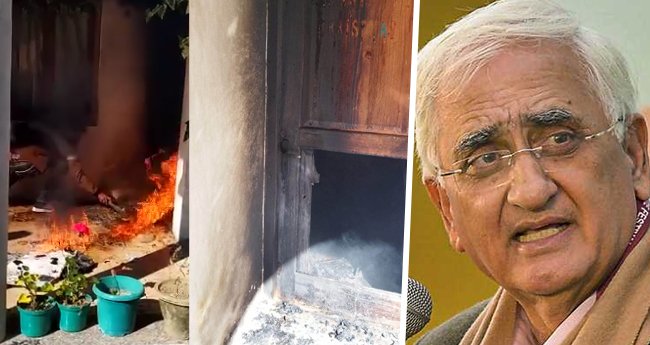 New Delhi, Nov 15: The Nainital home of Congress leader Salman Khurshid was vandalised and set on fire by extremists today, days after his new book on Ayodhya sparked a controversy by drawing a parallel between radical "Hindutva" and radical Muslim groups.

Sharing the visuals, the Congress leader said in a post, "I hoped to open these doors to my friends who have left this calling card. Am I still wrong to say this cannot be Hinduism?"

The former Union Minister has been under the spotlight ever since the launch of his new book, ''Sunrise Over Ayodhya: Nationhood in Our Times''. At the centre of the controversy is a passage that reads, "Sanatan Dharma and classical Hinduism known to sages and saints were being pushed aside by a robust version of Hindutva, by all standards a political version similar to the jihadist Islam of groups like ISIS and Boko Haram of recent years."

Hitting out, the BJP said Mr Khurshid's remark has hurt sentiments of Hindus and alleged that the Congress is resorting to "communal politics" to corner Muslim votes.

Soon after, Congress leader Rahul Gandhi sought to differentiate between "Hinduism" and "Hindutva" and the BJP, in a scathing response, said Mr Gandhi and his party have a "pathological hatred" of Hinduism.

"We may not agree with Hindutva as a political ideology but comparing it with ISIS and Jihadist Islam is factually wrong and exaggeration," Mr Azad said.

A Delhi-based lawyer has also filed a complaint against Mr Khurshid, also an eminent jurist.

Chikkaballapur, Nov 26: A 28-year-old man died after coming in contact with the electric fence of a tomato farm in Charakamattenahalli, Gauribidanur taluk of Chikkaballapur district. Hours later, the angry kin of the deceased youth beat the farm owner to death with wooden logs.

With tomato prices more than doubling and fetching Rs 200 per kg in auctions, the farm owner, Aswath Rao, 47, had erected an electric fence to protect his crop.

Cowherd Vasanth Rao from the same village was electrocuted when he came in contact with the fence on Wednesday night. As the news of Vasanth’s death spread on Thursday morning, his angry relatives rushed to the tomato farm where Aswath was resting.

The mob attacked him and caused him grievous injuries. Other villagers rushed Aswath to hospital, where he succumbed.

Chikkaballapur SP GK Mithun Kumar said Aswath had grown tomato on his one-acre land. Police sources said amid the rising tomato prices, growers in the district also have to contend with robbers who steal the fruits.

Mithun Kumar, however, said it was illegal to erect a live electric fence around farmlands. He has asked Bescom authorities to take steps to prevent people from resorting to such steps as it could result in loss of not only lives but also cattle heads.