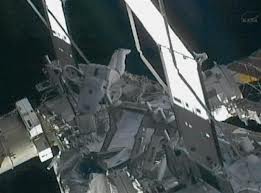 Williams and Japanese space flyer Akihiko Hoshide ventured yesterday outside the space station at 1229 GMT (1759 IST) and just a little more than five hours later, they had reconfigured some coolant lines and deployed a spare radiator, isolating the leak.

"Suni and Aki, heartfelt congratulations to you," NASA astronaut Mike Fincke, who helped walk the astronauts through their tasks from mission control at the agency's Johnson Space Center in Houston, said at 1741 GMT (2311 IST).

"We accomplished just about everything we set out to do today. A big, huge congratulations to you guys on the ground for putting this together," Williams responded.

Each of the space station's eight huge solar panels has its own associated power system, and circulating ammonia helps cool this gear down.

The leak, which NASA and its space station partners first noticed in 2007, has the potential to affect one of these power channels if it's not fixed.

Today's Spacewalk, or extra-vehicular activity (EVA), a crucial step in that process was slated to last about 6 1/2 hours, and it proceeded pretty much on schedule.

By 0128 hrs IST, both astronauts had re-entered the space station through its airlock, and the spacewalk was officially over nine minutes later.

They rejiggered some lines in the affected coolant system and installed a spare radiator.

NASA officials hope this stops the leak, which they suspect may be coming from the old (swapped-out) radiator.

If ammonia continues to escape, the station's operators will eventually have to try something else.

But there likely won't be an urgent need for a new fix, since the spare radiator should provide enough ammonia to keep the coolant system operating until next October or so, officials said.

It should come as no surprise that Williams and Hoshide ticked off their tasks efficiently today, for the two are seasoned space walkers.

In late August and early September, they replaced a vital power unit on the station over the course of two spacewalks, defeating an unexpectedly stubborn stuck bolt in the process.

Today's EVA was the seventh for Williams, the third for Hoshide and the 138th to depart from the station overall.