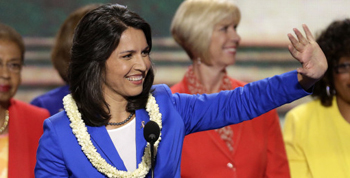 Washington, November 7: Tulsi Gabbard today created history by becoming the first Hindu-American to be elected to the the US House of Representatives, winning her Hawaii seat by trouncing her Republican rival in a one-sided contest.

An Iraq war veteran, 31-year-old Gabbard defeated K Crowley of the Republican Party with a handsome margin. Her victory has been cheered by the Hindu-American community across the country.

Though just 50 per cent of the votes had been counted when reports came in, Gabbard had taken a massive unassailable lead of 120,000 votes over her Republican rival in her bid to represent Hawaii's 2nd Congressional District in the US House.

She is also the first female combat veteran to serve in the Congress.

"Although there are not very many Hindus in Hawaii, I never felt discriminated against. I never really gave it a second thought growing up that any other reality existed, or that it was not the same everywhere," Tulsi said in a statement, soon after she took an inaccessible lead over her Republican challenger.

"On my last trip to the mainland I met a man who told me that his teenage daughter felt embarrassed about her faith, but after meeting me, she's no longer feeling that way. He was so happy that my being elected to Congress would give hope to hundreds and thousands of young Hindus in America, that they can be open about their faith, and even run for office, without fear of being discriminated against or attacked because of their religion," Gabbard said.

She was endorsed by US President Barack Obama, during the election campaign.

Proud of her Hindu religion, she is not Indian or of Indian heritage. Her father Mike Gabbard, is currently Hawaii State Senator and mother Carol Porter Gabbard is an educator and business owner.

At 21, she became the youngest person elected to the Hawaii Legislature. At 23, she was the state's first elected official to voluntarily resign to go to war. At 28, she was the first woman to be presented with an award by the Kuwait Army National Guard.

Early during the Democratic National Convention, Gabbard spoke from stage along with Nancy Pelosi, the Democratic Party leader in the US House of Representatives.

"Aloha! I'm Tulsi Gabbard, candidate for Congress in Hawaii and a captain in the Army National Guard," she had said, amidst rounds of applause and cheer from the audience.

Currently a Company Commander with the Hawaii Army National Guard, who has volunteered to serve on two deployments to the Middle East, Gabbard served as Hawaii's youngest state representative in 2002 and is the youngest woman in the US to be elected into such a position.

Having never visited India so far, Tulsi says she is looking to make her first trip to India as an elected member of the House of Representatives.

"As a Vaishnava, I especially look forward to visiting the holy sites of Vrindavan," she said in an earlier interview.

Notably Hawaii is comprised of a majority of Christians with a significant number of Buddhists (10-15 percent of the population).

The number of Hindus living in Hawaii is relatively small, with only two Hindu temples in the entire state, the Iskcon Temple on Oahu and the Aadheenam Temple on Kauai.

Her religion, Tulsi said is not an issue for the election, neither it has been a negative factor in her electoral campaign, she noted.

Tulsi was born in 1981 in Leloaloa, American Samoa, the fourth of five children born to a Hindu mother and a Christian (Catholic) father.

At the age of two, the family moved to Hawaii, the 50th state of the US, also known as the "Aloha State"; which is also the birth place of Obama.