76-carat Indian diamond to be auctioned at Christie's 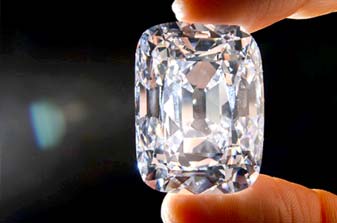 Geneva, November 9: Archduke Joseph, one of the rarest and most famous diamonds in the world, with its origin traced to ancient Golconda mines of Andhra Pradesh, is all set to be auctioned on Tuesday.

Presented in Geneva Thursday by Christie's, the diamond is hoped to raise over $15 million, Xinhua news agency reported. The magnificent gem combines an impressive size of 76.02 carats, perfect colour and internally flawless clarity.

According to Jean-Marc Lunel, senior specialist at jewellery department of Christie's, due to its cut, shape, colour and clarity, Archduke Joseph was certainly to be one of the most important and precious diamonds ever presented at the auction.

The ancient Golconda mines have been the source of the world's most coveted historical diamonds, including the Kohinoor, in the Royal Collection at the Tower of London, and the Regent, considered the finest diamond in the French Crown Jewels.

According to Lunel, this diamond has been officially recorded as the property of the Archduke Joseph August of Austria, Palatine of Hungary (1872-1962), and was subsequently named after him.

76-carat Indian diamond to be auctioned at Christie's