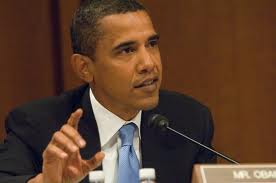 Washington, November 15:President Obama said in his victory speech last week that “elections matter.” On Wednesday, he made clear how much the election matters to him — and to the way he intends to govern in his second term.

Appearing in his first post-victory news conference, the customarily cautious Obama spoke like a politician with nothing to lose after winning the last race of his life.

Over the course of an hour, he struck an unabashedly populist tone in characterizing his second-term “mandate” to help the poor and the middle class, and he warned his partisan rivals that voters had sided with his approach to the economy during the long campaign.

There was a confidence and ease in Obama's manner far removed from the listlessness of his first presidential debate in Denver six weeks ago. There also was a stridency that had been absent during key moments in his first term, much to the dismay of his supporters.

Displaying a rare flash of anger, Obama fiercely defended U.N. Ambassador Susan E. Rice, a leading candidate to be the next secretary of state, from Republican attempts to “besmirch her reputation.” He told GOP senators to “go after me” instead and, showing the potential risks of his approach,they soon did.

“As I said during the campaign, there are going to be times where there are fights, and I think those are fights that need to be had,” Obama said, sounding like someone eager to have them.

“But what I think the American people don't want to see is a focus on the next election, instead of a focus on them,” he continued. “And I don't have another election.”

Presidents often use their first post-election news conferences to set a tone and a direction for the second term, as George W. Bush famously attempted in 2004 when he declared that he would spend his “political capital” in the years ahead.

Obama proved no different in Wednesday's White House news conference, only the 20th of his presidency. His self-assurance on display in the East Room, despite a looming fiscal crisis and a widening scandal involving former CIA director David H. Petraeus, suggested he would take a far more combative approach with Congress than he did during his first term.

The event also reflected a sense that Obama understands the need for a fast start after a draining and negative campaign. Although his term will last another four years, a second-term president's power slips away sharply after about two.

“Even less really, because the congressional elections will be taking away attention before that,” said Robert Dallek, a presidential scholar. “This is when he has his authority and influence, and his political capital is right there to be spent. He doesn't need to wait until January.”

With that narrowing window in mind, Obama said Wednesday that he intends to be as ambitious as possible, while avoiding the second-term mistakes that have afflicted at least the past three two-term presidents.

“I'm more than familiar with all the literature about presidential overreach in second terms,” he said. “We are very cautious about that. On the other hand, I didn't get reelected just to bask in reelection.”