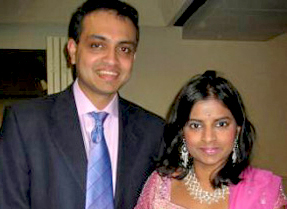 London, Aug 12: A British Indian dentist from Yorkshire committed suicide after allegedly being "bullied and harassed" by the National Health Service which threatened disciplinary action against him over keeping of records at his clinic, an inquest heard.

Dr Anand Kamath, 42, was under investigation by the National Health Service (NHS) over record-keeping at Rothwell Dental Surgery, which he ran with his wife and fellow dentist Dr Rajni Prasad in the city of Leeds.

An inquest heard last week that the father of three felt "bullied and harassed" and took his own life after receiving a letter from the NHS warning him that he could be reported to the General Dental Council.

"They behaved like bullies and drove a loyal NHS servant over the edge. He just couldn't take the anxiety," his 42-year-old wife told the inquest.

"When the letter came, that was the final straw. He gave everything to the NHS. His reward for caring for thousands of patients no other practice would take was to be threatened with the most severe disciplinary action over administrative matters which we agreed straightaway needed improvement," she added.

According to Sunday Mirror, Dr Kamath and his wife had for 10 years treated only NHS patients in an area of Leeds where there were no other NHS government-backed dentists.

The couple had taken on 10,000 patients, four times that of the average practice, to help out patients who could not afford the high costs of private dentistry.

Their record-keeping suffered in the process and Rajni Prasad found her husband with his wrists cut at their home in Pudsey, near Leeds, in December last year.

The British Dental Association has called for an inquiry into the circumstances behind the suicide of Dr Kamath.

Recording a verdict of suicide, Wakefield coroner David Hinchliff said,"There had been a complaint and an investigation, not about his ability as a dentist, but in relation to recordkeeping which had put him and his wife under an intolerable strain."

"It seems he was in grave danger of being removed from the list of practitioners which would have ended his career. It appears all of this just became too much and he had taken action to end his own life," he said.

Hinchliff added that unreasonable pressure exerted on Dr Kamath by the trust "pushed a good man over the edge".

"We are happy that the investigation into Dr Kamath being undertaken was following National Clinical Assessment service advice. Safety and quality of service is our priority and so we will always investigate when complaints are received. This can be stressful for some but we try to work with providers to ensure the process runs smoothly," an NHS England spokesperson said.