Australia to lock down 300,000 in Melbourne suburbs after coronavirus spike

US rejects Sharif's call to get involved on Kashmir 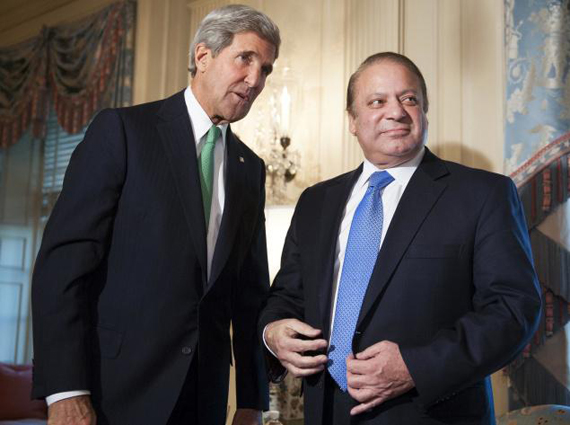 Washington, Oct 21: Even before Pakistan Prime Minister Nawaz Sharif landed here for a four-day visit, the US rejected out of hand his call for Washington to get involved to resolve the Kashmir issue.

"On Kashmir, our policy has not changed an iota," a senior administration official said in a background conference call Sunday reiterating US' oft-stated stand that Kashmir issue was a bilateral one between the two South Asian neighbours.

While it encouraged a dialogue between the two countries "the pace, scope, and character of India and Pakistan's dialogue on Kashmir is for those two countries to determine with each other," the official said.

The official was responding to comments made earlier Sunday by Sharif in London on way to Washington that even though India does not want it, world powers should get involved to resolve the Kashmir issue.

The world powers should do so as India and Pakistan both were nuclear powers and the region was a nuclear flash point, he was quoted as saying by the Associated Press of Pakistan.

But the US official did expect "India to come up at some point" during Sharif's first meeting Wednesday with US President Barack Obama nearly a month after Indian Prime Minister's Sep 27 summit with Obama at the White House.

While the focus of the Obama-Sharif meeting would be bilateral relationship, including energy, economy and extremism, in addition to Afghanistan, the official said, "We expect India to come up at some point."

"We have been very encouraged by steps that both India and Pakistan have taken," he said "to resolve issues on the trade and energy side, in keeping with the "energy and economy theme" that Obama and Sharif would explore here.

"Obviously (they are) very positive," he said referring to the steps taken since Sharif's meeting with Manmohan Singh on the sidelines of the UN general assembly in New York just two days after a summit with Obama where he had called Pakistan as the epicentre of terrorism.

Like India, US officials too expressed concern that terrorism emanating from inside Pakistan could derail on-going peace talks between India and Pakistan after Sharif was voted to power in May this year.

"Cleary we would be concerned about the terrorist groups that would derail that dialogue process," the official said.

Meanwhile, meeting Sharif over dinner Sunday night, Secretary of State John Kerry said "We're very anxious to have a series of high-level, important discussions over the course of the next few days - the Vice President (Joe Biden), the President, tonight's dinner."

"We have a lot to talk about and the relationship with Pakistan could not be more important. On its own, a democracy that is working hard to get its economy moving and deal with insurgency and also important to the regional stability," he said.

Sharif, who last visited Washington in 1999 during the Kargil war before he was overthrown in a coup by Gen Pervez Musharraf, will hold a series of meetings with the top US officials and lawmakers on Capitol Hill.

“Secretary Kerry's meeting with the PM (Sharif) is their third in three months, and continued the robust dialogue on our shared goal of a stable, secure and prosperous Pakistan,” a statement issued by the State Department said.

Sharif is in Washington on a four-day official visit to the U.S., and is scheduled to meet President Barack Obama on October 23.

He is accompanied by a high-powered delegation that includes Finance Minister Ishaq Dar, Adviser to the Prime Minister on National Security and Foreign Affairs Sartaj Aziz and Foreign Secretary Jalil Abbas Jilani.

Monday's discussions covered a broad range of domestic and regional issues including peace and security, counter-terrorism cooperation, collaboration on Pakistan's energy sector, increasing bilateral trade and investment and the common interest of a secure, stable Afghanistan, it said.

“Both sides agreed on the importance of our continued counterterrorism cooperation, and that extremism is countered in part by opportunities arising from greater economic stability.

“To that end, the U.S., Pakistan's largest trading partner, remains committed to an economic relationship increasingly based on trade and investment,” the statement said.

Meanwhile, the Obama administration has requested the U.S. Congress to resume the security assistance to Pakistan, which now stands at 305 million U.S. dollars for fiscal year 2014, a drop of 35 per cent as compared to the 2012 fiscal.

The drop is because the Administration has not asked for a renewal of temporary Pakistan Counterinsurgency Capability Fund (PCCF), which was started in the year 2009, a senior administration official told PTI.

US rejects Sharif's call to get involved on Kashmir