After election drubbing, JDS asks members to not engage with media

Bengaluru, May 26: Following the massive defeat faced by Janata Dal (Secular) and Congress alliance in the 2019 Lok Sabha election, JD(S) working president MS Narayan Rao issued a circular to party leaders, spokespersons and MLAs asking them to not participate in TV debates or give any statements to the media.

The BJP has won 25 out of 28 parliamentary seats in Karnataka - a state government by the Congress, JD(S) alliance - while one seat each was bagged the coalition partners and an independent candidate.

Earlier, taking the moral responsibility for the Congress party's humiliating defeat in the Lok Sabha polls, the party's campaign committee chairman H K Patil had resigned from his post.

In the 2014 Lok Sabha elections, BJP had won 17 seats in the state while the Congress and the JD(S) were restricted to nine and two seats, respectively.

The assembly elections in Karnataka in 2018 had let to a hung assembly with BJP as the single largest party with 105 members in the 225 member assembly while the ruling coalition had 117 members with 79 legislators from Congress, 37 from JD(S) and 1 from BSP. 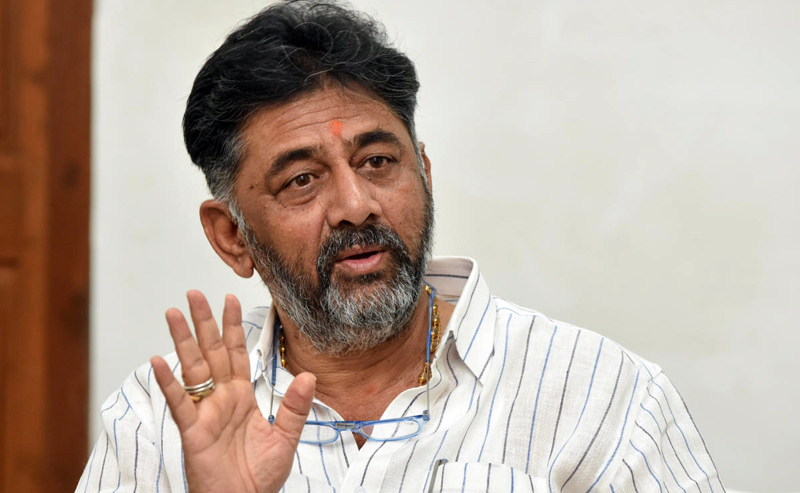 Three people died in the police firing, 60 policemen were injured and several vehicles were set ablaze in Bengaluru on Tuesday night after Congress MLA Akanda Srinivas Murthy's nephew Naveen allegedly posted a derogatory message on social media. Naveen was arrested only after the situation went beyond control.

Condemning the violence, Shivakumar tweeted: "No one must take law into their own hands. The government must take strict and exemplary action against the person who made the derogatory social media post as well as those who indulged in rioting and arson."

"For us, Karnataka is important, the image of Bengaluru is important. These people (the MLA's nephew who posted an anti-Islamic tweet) are trying to colourise this. All this is BJP's conspiracy and hidden agenda. BJP leaders are provoking everyone," Shivakumar said.

In a press meet, Shivakumar showed the copies the of the derogatory social media posts by Naveen, who also had admitted that he had voted for BJP.

“Police should have arrested Naveen by registering a suo moto case against him for such derogatory posts.  Unfortunately, even when people lodged complaint against the accused, the police failed to swing into action. The police could have averted the violence by taking action against Naveen immediately,” he said.

what can we expect from present govt.

Long term and permanent Solution : Make all citizens with necessary education to think what is right and wrong.
Quick /Temporary solution : Tit for Tat. Regardless of their count give all types of reply more than which will be
costly and think at least 10times before repeat

No lockdown in Dakshina Kannada from July 23: Minister

Mangaluru, July 21: Putting an end to all speculations, district in charge minister Kota Srinvas Poojary on Tuesday said that the lockdown in Dakshina Kannada will not be extended beyond Wednesday.

In a video message, the minister said that all the shops in the district will remain open from July 23 morning. He said district administration will make a formal announcement soon.

Meanwhile chief minister B S Yediyurappa said: “There’ll be no lockdown from Wednesday, people need to get back to work, economy is also very important. We have to fight COVID-19 while maintaining stable economy. Lockdown is not the solution, now restrictions will be placed only in containment zones.”

Bengaluru, Jul 21: The total number of Covid-19 cases in Karnataka breached the 70,000 mark on Tuesday as the state reported 3,649 fresh infections, while 61 fatalities took the death toll to 1,464, the health department said.

The day also saw 1,664 patients getting discharged after recovery. Out of 3,649 fresh cases reported on Tuesday, a whopping 1,714 were from Bengaluru urban alone. As of July 21 evening, cumulatively 71,069 Covid-19 cases have been confirmed in Karnataka, which includes 1,464 deaths and 25,459 discharges, the health department said in its bulletin.

It said that out of the 44,140 active cases, 43,557 patients are in isolation at designated hospitals and are stable, while 583 are in Intensive Care Units.

Twenty-two out of 61 deaths reported on Tuesday are from Bengaluru urban, followed by five each from Dakshina Kannada, Mysuru and Dharwad, four each from Kolar and Belagavi, three each from Hassan, Tumakuru and Haveri, Bidar 2, and one each from Chikkaballapura, Chikkamagaluru, Chamarajanagara, Gadag and Vijayapura.

Most of the deceased either had a history of Severe Acute Respiratory Infection (SARI) or Influenza-like illness (ILI). Out of 3,649 cases tested positive on Tuesday, contacts of the large number of the cases are still under tracing.