Yadgir, July 2: A fresh video of the health staff dragging the body of a Covid-19 victim and dumping it into a pit disgracefully has gone viral on social media.

The incident occurred in Yadgir district of Karnataka on Tuesday, just days after shocking visuals of bodies of Covid-19 victims being handled disrespectfully in Ballari district went viral.

In the fresh video, two persons with PPE suits can be seen dragging, hurling and dumping the dead body of a senior citizen who died of covid-19. The duo dragged the body using a wooden log inserted to both hands of a plastic body bag for nearly 300 meters.

After pulling till the pit, the body was heartlessly dumped including a wooden log. Several villagers were also seen in the video.

The victim was settled in Siravara in Raichur district, although he originally hailed from Yadgir. On Sunday he was busy overseeing his daughter' wedding that was first postponed due to lockdown.

According to a relative of the deceased, on Monday he complained of breathing problems following which an ambulance was called to carry him to Raichur Institute of Medical Sciences (RIMS).

Raichur Deputy Commissioner (DC), R Venkatesh said he was brought dead to the hospital as he succumbed en-route. The family members were quarantined and the body was packed as per the protocols and sent to Yadgir as his family members informed that the victim is from the neighbouring district. "In Yadgir district he was swabbed and his test results came positive," DC informed.

As soon as residents of Honagera village learned about the arrival of the body, the family members were harassed asking them to not to bury the body in any of the fields in the village.

Sridevi, a relative of the deceased said "the locals assembled near our house and threatened consequences if the body was brought here. Fearing backlash, we asked the district authorities to perform the last rites in the farmland owned by the victim. But it is now saddening to see the video where the body was inhumanely dragged and dumped."

Meanwhile Karnataka Chief Minister BS Yeddyurappa on Wednesday (July 1, 2020) said that six staff members have been suspended in connection with the inhumane funeral of a man who died of COVID-19 in Balari district.

Bengaluru, Aug 8: Congress is confused on the Ram Mandir issue and in dilemma to take a firm stand fearing loss of Muslim or Hindu votes, according to BJP leader and Union Parliamentary Affairs Minister Pralhad Joshi.

"Congress opposed BJP's stand on constructing Ram Mandir in Ayodya, it called Lord Ram fictional and even decided to break the Ramsetu. Now, Congressmen are speaking the other way. Congress cannot think beyond vote bank politics which is in its DNA itself. Congressmen think that they are born to be in power," he said while speaking to media persons.

He said that BJP is all for constructing a grand Ram Mandir peacefully and legally, due to its conviction and not for politics. Same was the case with the revocation of Article 370 for Jammu & Kashmir. Anti-national activities have comparatively come down now.

Some people do not want everything going smoothly in the country, and Congress and Asaduddin Owaisi are among them, Joshi opined, adding that the Congress is merely frustrated.

He spoke to reporters after a meeting with Prasad on Tuesday.

"The committee, headed by senior officials will audit the reason for the increase in death cases. Has there been a death due to treatment delay? Or are there any shortcomings in the treatment process?" the deputy chief minister said.

He pointed out that based on the report, the committee should try to correct the deficiency and reduce the death rate.

"How many beds are in which hospital? How many patients are on a ventilator? How many have gone home from the hospital? Etc. All information needs to be updated online at the moment. He suggested that this information should be made available to the public online," Ashwaththanarayana said.

Stating that some hospitals are not giving details about the number of beds correctly, he instructed the commissioners to take legal action if differences in their data are found.

He said that there is a shortage of ASHA workers in the city and it needs to be hired immediately.

According to the Ministry of Health and Family Welfare, there are 74,477 active COVID-19 cases in Karnataka and the death toll in the state is at 2,594.

‘People volunteering as civil police wardens not to receive any remuneration’

Bengaluru, Jul 16: People volunteering as civil police wardens with the city police department will not receive any remuneration, an official said on Wednesday. 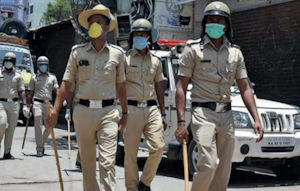 “We wish to clarify the rumours floating on social media and confirm that the volunteers helping local police as civil police wardens in enforcement of anti-Covid measures will not be paid any remuneration,” said an official.

On Tuesday, Bengaluru city police commissioner Bhaskar Rao had urged interested people to volunteer for the department, indicating how strained the department has been amid Covid.

“Inviting physically fit and service minded residents of Bengaluru, both men and women, between the age of 18-45 to volunteer as civil police wardens,” said Rao.

The department is offering a choice of the police division, jurisdiction and the shifts one wants to choose to be a civil police warden.

Additional Commissioner of Police Hemant Nimbalkar said volunteers are a welcome support to the police in their field duty but should not be left alone.

“Volunteers are a support to the police in the field and shall not work standalone. They shall be attached with duty police as assistance. A jacket and a cap should be provided to them,” said Nimbalkar.

He reminded that the safety of the volunteers is the responsibility of the policemen.

Many city policemen have been infected with the virus and quarantined while more than six have succumbed.

“It is a tough time for all policemen irrespective of the rank. Four hundred and fifty active cases across the state and the loss of six lives speak volumes about their involvement in the war against Covid,” said Director General of Police Praveen Sood recently.

He expressed hope that the difficult times will pass, saying all the members of the police department are a family.