Kuala Lumpur, Oct 20: Sheikh Aboobacker Ahmed, one of the most influential Muslim scholar and educationist in India, has been awarded the OIC Jewels of the Muslim World Award 2016 along with seven other achievers at a special ceremony held in Putra World Trade Centre, Kuala Lumpur. 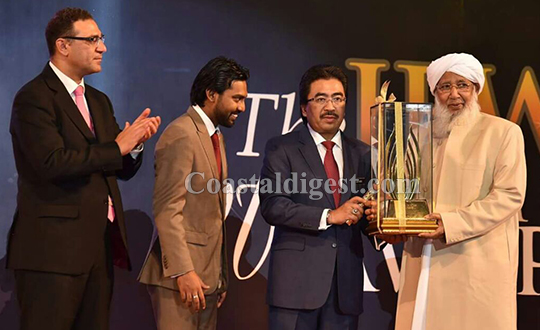 Also known as Kanthapuram AP Aboobacker Musliyar and AP Ustad among Keralites, he is the general secretary of All India Sunni Jamiyyathul Ulama and Founder Chancellor of the Markazu Ssaquafathi Ssunniyya located in Karanthur, Kozhikode.

The award, presented by the Second Finance Minister Datuk Johari Abdul Ghani, on Oct 19 recognises A P Ustad's long-term contributions to the field of education.

The prestigious award, currently in its 7th year is an endeavour to mark excellence, innovation and accomplishments of individuals in the areas of business and societal improvement.

The eight award winners for 2016 are highly respected movers and shakers who have created economic value and nurtured talents through their efforts.

This recognition, awarded by OIC Today magazine will be of great importance as an inspiration to the younger generation to become productive and capable participants in the global economy.

The Jewels of the Muslim World award began in 2011 and has significantly been related to the main goal of the annual eventThe Muslim World BIZ' represented in elevating the status of the Islamic economy through systematic processes.

On one hand, these processes boost intra-trade activities between the 57 member countries of the Organisation of Islamic Cooperation, while enhancing the collaboration of the Muslim countries with the rest of the world on the other.

Every year the award is presented at a special ceremony during the official launching ofThe Muslim World BIZ'. 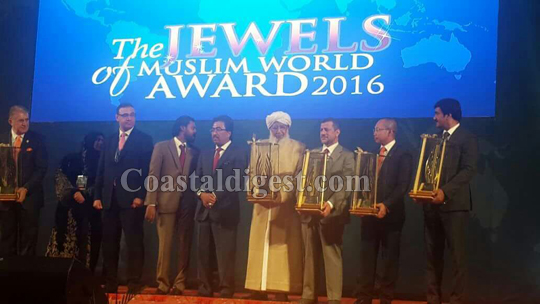 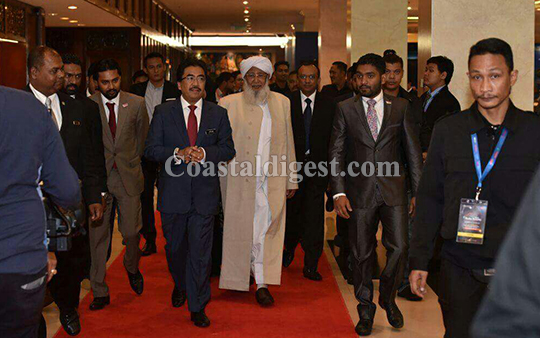 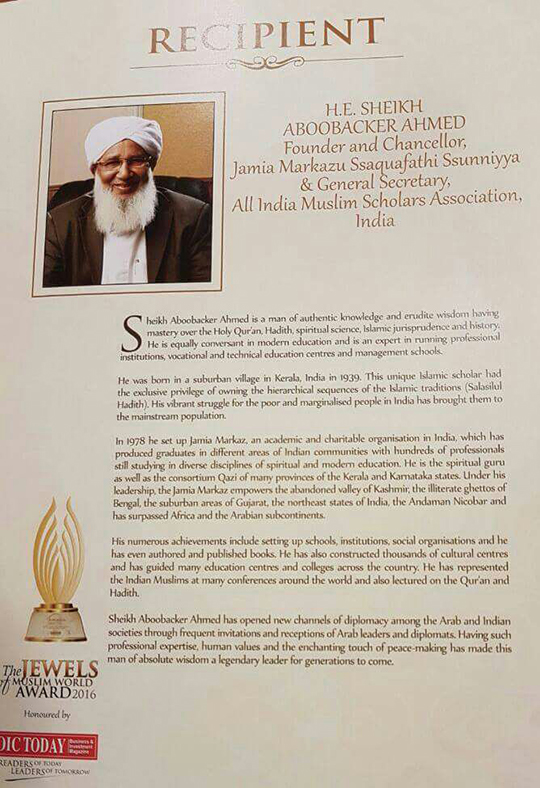 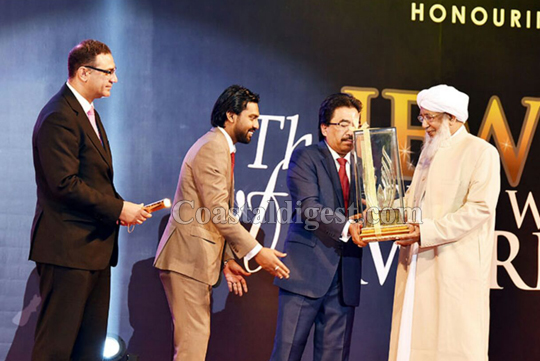 Masha Allah, He deserved it. Right choice by award authority. I personally visited Markaz orphans and i saw thousands of Yatheems (Orphans) studying there with free food & accommodation. If Allah (S. W. T) accept his services to society, it will enough to his both of the world...

Congratulation for the award. May Allah grant him the right path. He will get one more award from BJP.

AP and muslim scholar???? sounds really weird...Allahu akbar.. may Allah guide this man and grant him the real understanding of islam! ameen ya rabbal alameen..

MashaAllah.. Is he the same AP of APM [ Anantha Padmanabha Motors ] ?

Now don't play petty politics over it.....OIC is organisation of all Muslim world...even saudi is in it...And congratulations to A.P Aboobacker Musliyar.....Muslim unity is the need of time ...Now please Muslim brothers don't accuse and abuse each other...Be a non denominational Muslim 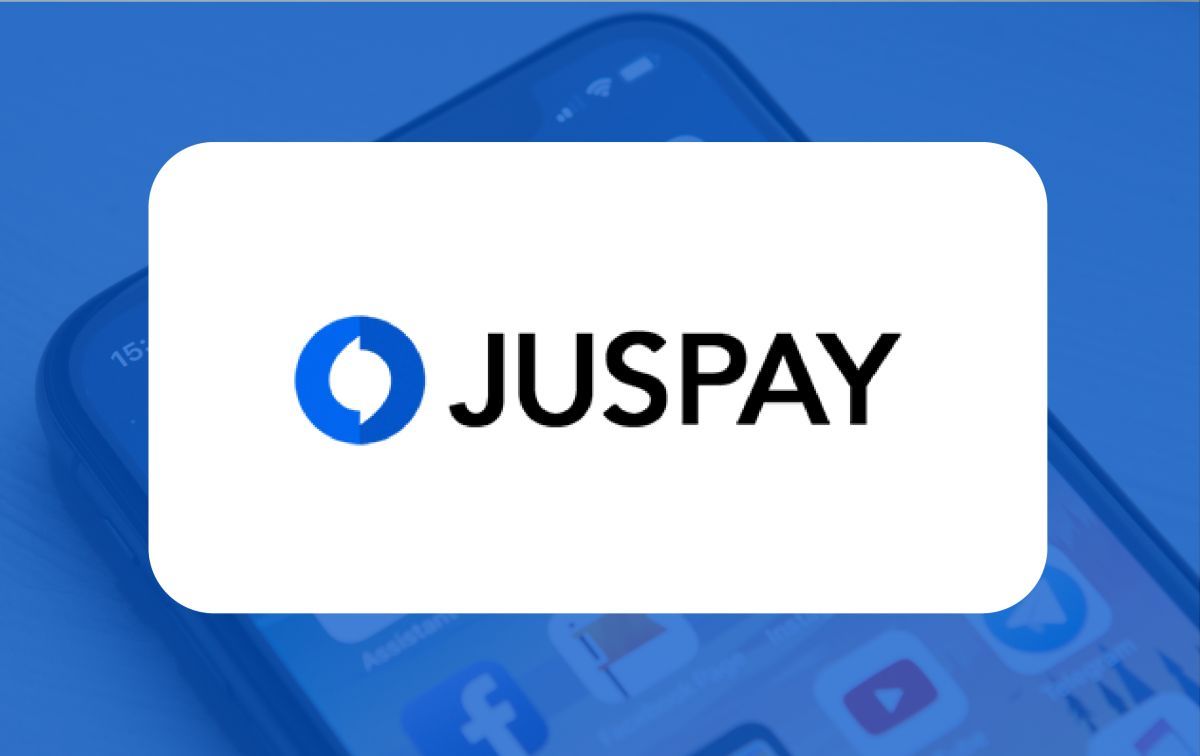 Bengaluru, Jan 6: Bengaluru-based digital payments gateway JusPay on Tuesday clarified that about 3.5 crore records with masked card data and card fingerprint were compromised by a hacker and the claim of 10 crore cardholders' data being affected is “incorrect". Responding to claims made by independent cyber security researcher Rajshekhar Rajaharia on Sunday that data of nearly 10 crore credit and debit card holders in the country is being sold for an undisclosed amount on the Dark Web -- leaked from a compromised server of Juspay, the company said in a fresh statement that none of its merchants and their customers are at any risk.

"The masked card data is used for display purposes on merchant UI and cannot be used for completing a transaction. A part of user metadata in our system which has non-anonymised, plain-text email IDs and phone numbers got compromised," the company informed.

"On August 18, 2020, an unauthorised attempt on our servers was detected and terminated when in progress," it added.

According to JusPay, no full card numbers, order information, card PINs and passwords were leaked.

"We conducted a thorough audit on the day of the incident which confirmed that our 'Secure Data Store' which hosts the 16-digit encrypted card numbers was not accessed and remains secure. The cyberattack was identified in an isolated/separate system," JusPay elaborated.

"We can confirm that the compromised data does not contain any transaction or order information, as the intrusion was terminated before such an access."

Rajaharia had told IANS that the data was being sold on the Dark Web for an undisclosed amount via cryptocurrency Bitcoin.

"For this data, hackers are also contacting via Telegram," he said, adding that if the hackers can find out the Hash algorithm used to generate the card fingerprint, they will be able to decrypt the masked card number.

"In this condition, all 10 crore cardholders are at risk," Rajaharia noted.

JusPay said that it has made significant investments in security and data governance and its policies are aligned to globally accepted data protection standards.

"We did identify gaps in some of the older access keys and moved them to non-access key-based authentication supported by hosting providers. We have also made two-factor authentication (2FA) mandatory for all the tools accessed by our teams," the company said.

According to Saurabh Sharma, Senior Security Researcher (GReAT), Kaspersky (APAC), data leaks due to internal vulnerabilities has become a common instance in India, especially in the last two years.

"Enterprises and institutions have begun to understand the importance of having a strong security framework to save themselves from an external attack by a cybercriminal. However, they tend to overlook the internal vulnerabilities that can prove to be very damaging to their reputation and business if exploited by the bad guys," Sharma told IANS.

Regular network and server evaluation, proactive detection of zero-day vulnerabilities and patching them immediately, launching attractive bug-bounty programmes and promptly informing the users of a potential leak are some of the "mandatory steps that large enterprises and institutions should follow in order to stay away from cybercriminals and save their reputation," he added.