Bengaluru, Jul 9: The M Chinnaswamy cricket stadium and the Bengaluru Palace in Karnataka will be converted into a COVID-19 care centre, informed the Chief Minister's Office (CMO) on Thursday.

The Bangalore International Exhibition Centre was also recently converted into a COVID-19 care facility by the state government amid the rising number of COVID-19 cases.

R Ashoka, the state's COVID management in charge said, "People of Bangalore need not panic. All necessary equipment and preparation are being arranged by the state. We have over 600 ambulances ready to take care of COVID patients."

As per the data from the Union Ministry of Health and Family Welfare, Karnataka now has a total of 28,877 COVID-19 cases, including 16,531 active cases and 11,876 recoveries.

470 people have died of the infectious virus in the state so far. 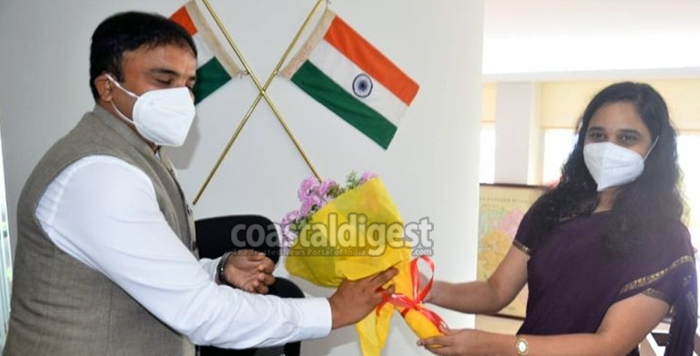 The 2013 batch Karnataka cadre officer succeeds Sindhu B Rupesh, who was transferred as Director of Electronic Delivery of Citizen Services (EDCS), Bengaluru. The outgoing DC welcomed the new DC in the presence of staff.

Dr Rajendra said that he expects cooperation from all stakeholders in administering the district, amidst the mounting Covid-19 cases.

Rajendra, an alumnus of JJM Medical College, Davanagere, was serving as the CEO of Belagavi zilla panchayat before being posted as DC of this coastal district.

Having served as assistant commissioner of Puttur sub-division for nearly a year from December 2015, Dr Rajendra, hails from Thirthahalli in Shivamogga district, had his probationary training in Bidar. He posted as CEO of Ballari ZP where he worked for nearly three till 21, 2019.

He also had a brief stint as assistant secretary in the department of fertiliser with the ministry of chemicals and fertilisers.

Sindhu who was the CEO of Udupi zilla panchayat had succeeded Sasikanth Senthil, who resigned from the Indian Administrative Service on September 6, 2019. She had taken charge on September 7, 2019.

Gokak, Jul 25: A JMFC magistrate here issued summons to the Chief minister B S Yediyurappa in relation to a complaint for the alleged violation of election code of conduct, during by-elections to the Gokak Assembly seat held last year.

According to official sources, a complaint had been registered against Chief minister B S Yediyurappa during the election campaign, under the People Representative Act, for allegedly wooing voters during electioneering.

The Gokak Police, who had investigated the case, however had submitted a 'B' report to the court letting off the Chief minister from the charges.

However the Magistrate, rejecting the Police report, had maintained that there exists prima facie case against the accused and issued summons to appear before the court on September one, the sources added.