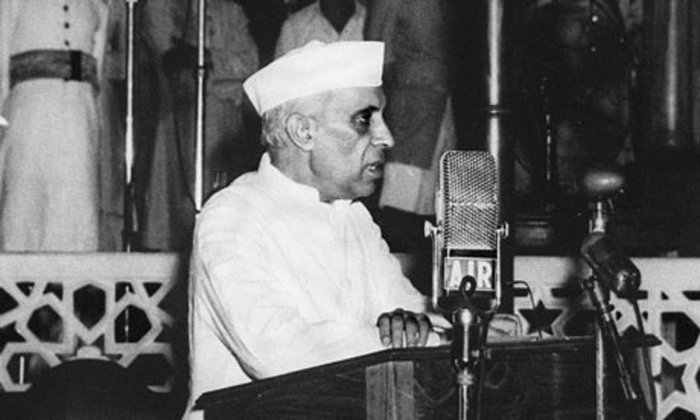 Jawaharlal Nehru made his famous “Tryst with Destiny” speech late in the night on August 14, 1947. It was delivered during one of the most momentous sessions of the Constituent Assembly, one that is well-known and well-recorded. Apart from Nehru’s speech itself, the presentation of the national flag, the singing of the national anthem, the taking of the pledge by all the members of the Assembly at the stroke of midnight are all well-known. Many evocative accounts of that moving day, by members and observers, are present and easily accessible.

But the session did not end there. The Constituent Assembly only adjourned to the morning of August 15, 1947. This day, when Nehru flew the Indian flag from the ramparts of the Red Fort, saw speeches by Governor-General Louis Mountbatten and Rajendra Prasad, in his capacity as the president of the Constituent Assembly. The speeches are revealing about the immediate circumstances in which India became independent -- what was said being as important as what was left unsaid.

The day began with the reading out of congratulatory messages received from nations far and wide. Mountbatten was then invited to speak.

The bulk of Mountbatten’s speech covered the events leading up to independence, specifically his role in the whole process. No doubt he played a key role in the exercise, but one notices not only a certain level of self-congratulation, but also self-exculpation. Self-congratulation for having advanced the date of independence from July 1948 to August 1947, when everyone thought that even June 1948 was too early. Self-exculpation for the failings that resulted from such a hasty withdrawal.

Mountbatten gave himself credit for the idea behind implementing Partition (“the leaders agreed to discuss a paper which I had laid before them on the administrative consequences of Partition”) while also subtly telling us who to blame for things that went horribly wrong (“To the ministers and officials who have laboured day and night to produce this astonishing result, the greatest credit is due”).

Prasad’s speech was almost a riposte to Mountbatten’s, focused as it was on the future, and has no mention of the speaker himself. Prasad, in this vein, outlined an almost utopian vision for what he hoped India would become.

He said: “Let us resolve to create conditions in this country when every individual will be free and provided with the wherewithal to develop and rise to his fullest stature, when poverty and squalor and ignorance and ill-health will have vanished, when the distinction between high and low, between rich and poor, will have disappeared, when religion will not only be professed and preached and practised freely but will have become a cementing force for binding man to man and not serve as a disturbing and disrupting force dividing and separating, when untouchability will have been forgotten like an unpleasant night dream, when exploitation of man by man will have ceased…”

While articulating this utopian idea, Prasad also mentioned the important task at hand -- the making of the Constitution. Even while the draft Constitution was still being framed, Prasad articulated the hope that it “will enable the people’s will to be expressed and enforced, and that will not only secure liberty to the individual but also reconcile and make that liberty subservient to the common good.”

Mountbatten’s and Prasad’s speeches were a neat contrast of old and new, of personal and societal, of individual and institutional. Where Mountbatten looked to the past, his own role and the parts played by specific individuals in getting India to independence, Prasad looked to the future -- of what independence would bring, of what the society and nation would look like, and what individuals could hope to achieve in the new country.

Both viewpoints are, however, valid. It is good to remember that India’s independence came about in hasty, confused and, eventually, bloody circumstances that continue to haunt us to this day. Yet, it was also infused with hope for a better future -- one that we have made progress towards but are a long way from achieving.

(The author is Co-founder, Vidhi Centre for Legal Policy, uses his legal training to make the case that Harry Potter is science fiction and Star Wars is fantasy)

Court asks KSRTC to pay Rs 1,000 for failure in picking up passenger

Bengaluru, Nov 15: A consumer court in Bengaluru has ordered the Karnataka State Road Transport Corporation (KSRTC) to pay Rs 1,000 as compensation to a passenger for failing to pick him up from the designated bus stop.

67-year-old S. Sangameshwaran, a resident of Banashankari in the city, had booked a return ticket to Tiruvannamalai in Tamil Nadu from Bengaluru on a KSRTC Airavat Club Class bus on October 12, 2019.

While returning from Tiruvannamalai on October 13, 2019, though the passenger reached the designated bus stop on time he was not picked up and instead received an SMS containing the details of the trip and contact number of the conductor.

When the passenger called up, the bus conductor maintained that he had already left Tiruvannamalai and blamed him for turning up late. The elderly man had to take a bus to Hosur in Tamil Nadu and another bus to reach Bengaluru.

It also said as many as 23 passengers boarded the bus from the changed location.

The consumer court didn't agree with the arguments of KSRTC as it failed to produce any evidence. The consumer court ordered the KSRTC to pay a compensation of Rs 1,000 for the inconvenience caused to the complainant, who is a senior citizen and asked it to refund the Rs 497 as ticket fare and an additional amount of Rs 200, which he paid as fare in other buses to reach Bengaluru.

Will miss protest site which witnessed our hardship, say farmers at Ghazipur border

New Delhi, Nov 20: Om Raj excitedly shows his small diary carrying details of all the friends he made at Singhu border, while Manak Singh says he will miss the protest site which witnessed their daily hardship for over a year to convince the Centre to repeal the farm laws.

Sitting with his friends on a cot near temporary tents set up at Ghazipur border, Raj (85) said the protest venue now feels like home and that the agitating farmers have developed a deep bond with each other.

The farmer, a native of Moradabad in Uttar Pradesh, shows his diary in which he has meticulously maintained details of all the protesters he has befriended in the past one year.

"See this is my tenth diary and there are hardly any pages left. I have maintained details of all the farmers I met here and became friends with over the period. We all stay in touch. The bond that we developed here has only become stronger. I also plan to visit them,” Raj says enthusiastically.

At Ghazipur border, one of the three prominent venues of the anti-farm laws agitation, protesters were filled with excitement following Prime Minister Narendra Modi’s announcement of repealing the controversial farm laws.

Another protestor says he will definitely miss the venue after he will return to his village.

Asked if he ever went to his hometown during the last one year, Raj recalled that he visited his native place on just two to three occasions and returned within a few days.

Since the last two months, the elderly farmer has set up a small venture which he starts at around 10 am and closes by 5 in the evening. He says the intention behind it was just to have some ‘gupshup’ (conversation) and pass the time with other farmers.

He also showed the spread of the products for sale -- bidis, matchboxes, badges and flags.

"When the farmers get bored, they sit here and pass time. I sell bidis and matchboxes which usually fetches me around Rs 100 a day,” he said.

Manak Singh (77), a native of Amroha district in Punjab, says, "This spot has become our place for chit-chat. We will stay here until all the laws are repealed as per legal procedure. We will not go unless all our listed seven demands are met by the central government. This announcement by the Centre could have also been done with upcoming elections in mind."

Having braved severe weather conditions and other hardship during their protest, the farmers say this has only made their brotherhood and will power stronger.

"If the government would have made this announcement earlier, we would not have suffered so much," a protester rues.

Meanwhile, a few tents away, 68-year-old Ram Kumar Sharma, hailing from Nithari village in Noida, had been serving ‘langar’ (free meals) from morning till night, at the protest site for nearly a year now.

Sharma, who is also a member of the Bharatiya Kisan Union, says he comes around 10 am and leaves at night after the last langar is served.

“I have been organising the langar with the spirit of social service. I will miss the farmers after they will leave the site,” he says.