Bengaluru, Oct 3: Despite of a ban imposed by the Karnataka State Pollution Control Board on Plaster of Paris (PoP) Ganesha idols, nearly 1.50 lakh such “banned gods” have been immersed in various lakes across Bengaluru city during recent Ganesh Chaturthi festival. 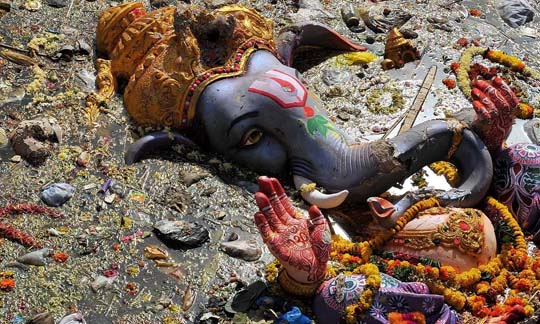 Officials of the KSPCB said that over one third of the Ganesha idols immersed in the city's lakes this time are PoP idols. Over 2.65 lakh mud idols of Ganesha also have been immersed in those lakes.

Earlier KSPCB Chairman Lakshman revealed that there were around 50,000 PoP idols in the market in different parts of Karnataka including 35,000 in Bengaluru alone this time. According to manufacturers, the idols sold in the market were old stock and they have sought permission to clear them this year.

The KSPCB has banned the use and immersion of PoP idols in water bodies. The action followed a notification issued by the National Green Tribunal in 2013. The NGT?had ordered pollution control boards to conduct a study on pollution caused due to immersion of PoP and coloured idols and ban them under Section 33 of The Water (Prevention and Control of Pollution)?Act, 1974.

I answered all ur questions with proof. But u couldn't give me
A single answer with proof.

And ur telling me iam dim witted. Ur running away from
The truth.

@ True Indian. They are not proofs. these are quotes from your books which we don't believe. Hence disqualified.

Let us put this candidate, ‘Bhagwan’ Rajneesh, to the test of Surah Ikhlas, the touchstone of theology:
The first criterion is “Say, He is Allah, one and only

If u don't believe in vedas. That means u will not remain a Hindu.

Vedas says there only one God.

1. “Ekam evadvitiyam” meaning” He is One only without a second.

Can we Prove Quran is From God?

Muslims have something that offers the clearest proof of all - The Holy Quran. There is no other book like it anywhere on earth. It is absolutely perfect in the Arabic language. It has no

@TRUE INDIAN,
First you have say whether \VEDAS are RIGHT OR WRONG.\"
1) If VEDAS are right and word of GOD - then you need not have to refer any other books.
2) If VEDAS are wrong - then you should neither read it nor refer it.

2.No Pollution
Cremating (burning) the dead body leads to pollution of the atmosphere which is detrimental to health and harmful for the environment. There is no such pollution caused by burying a dead body.

Economical
It is expensive to cremate a dead body when tons of wood have to be burned. Annually there is a loss of crores of rupees, only because dead bodies are cremated in India. Burying dead bodies is FREE

Regarding the saints ur talking.

It is dissociative identity disorder, a disease that affects the person's identity, making them think they're someone else.

Go and watch the mo

The biggest proof that Quran is the word of God. Is the Book is given to the prophet Mohammed. Who doesn't know to read and write.

Even in bible it says: I have many things to say onto u. But u cannot bear them.

Bible says: And i will send u another Comforter. And the book will be given to him. Who doesn't know to read and write.
And he will guide u onto all truth.

Now we cAme to know that. Science now says that earth is Geo sperical in shape. Just like an egg.

Even quran says that. One human being's finger doesn't match with another. Now we cAme to know that recently.

Even there are so many scientific proofs. Which science have come to know.

@TRUE INDIAN,
\SELF PRAISE IS OFTEN DISGRACE.\" you are praising your books so much.
Teachings of your books have not provided you enough Maturity and prudence in the matter of understanding god. If your book was complete without any errors the

Some of the vedas matches with quran. Like it says God is one. He has no father no mother. Dont worship dummy Gods. Worship him Alone. Dont associate parnters with him. There is no second God.

Some of the vedas matches with quran. Like it says God is one. He has no father no mother. Dont worship dummy Gods. Worship him Alone. Dont associate parnters with him. There is no second God.

SELF PRAISE IS OFTEN DISGRACE.\ you are praising your books so much.

This is not my book. This is Allah's book. And it is for everybody. And Even it for u.

Many of the hindus like shudras etc are not permitted to

if anywhere in your books its written VEDAS are wrong, its a wrong statement.

I have already quoted. I think u missed it. Scroll down and read

@TRUE INDIAN,
It was you praising your book, that its post graduation, no errors. etc. etc.
If you scroll back & see anywhere in my comments you will not find a single comment disgracing your holy book. Why, becoz of the teachings and greatness

Before 1400 years, Vedic religion knew 9 planets, their orbits,
We already knew about eclipse, how its caused. (akashganga- milkyway,) and so whats the great in that, if your book says earth is egg shaped, it is and we know

I haven't disgraced it, i respect rama shiva etc. but we believe they might be messenger of God.

Some of ur vedas scripture are similiar to that of Quran. But if u follow the teaching of vedas. U will be a muslim.

There is only one God and one religion.

Muslim is nothing but submission of will to God. Even vedas speak about that. But unfortunately u dont follow.

If u do just the opposite of vedas. Will God likes it. That is my question.

I think u should question ur Hindu pandits that if vedas says one god and should not make the idol of it,

I respect that u respect Holy Quran. And Quran also says not to degrade or insult other religion, But u can show them or teach them, its upto them who believe it or not.

Allah sent 124,000 prophets on earth. Thats why i said they might be messenger of God.

Too many Gods means they fight among each other some of the Gods view may be different. Many says some Gods asks for human blood, Animal blood. If one god doesn't answer ur prayers then u have to try with other Gods.

Now science tells us that pluto is not a planet. It is dwarf planet And there are some more dwarf planet as well.

Earth,Uranus and neptune is not included in the Navagraha. In the navagraha book why??

@TRUE INDIAN,
Navgrahas are those heavenly bodies affecting life & lifeless things on earth, including earth itself. So they are studied upon.

Uranus, neptune are farthest planets, do not have much impact on earth, hence not included.

@True India, you are not taking any pains to read what I have written. your question Where is earth, answer just read my previous message on why Uranus. Neptune not included in Nav graha. Dittos for earth.

The East India co. was ruling Tamil nadu in 1812 and Rous Peter was collector of Madurai. Rous Peter was kind hearted person and treated people of all faiths equally. He restored peace, prosperity and justice in Menaksi's Pattanam, Madurai.As district collector, peter was not only in charge of temple town, but also for administration of Temple. peter had a habit of going around the temple everyday before beginning his work.One night the city experience a huge thunder storm with lightning. Peter was inside his bungalow in deep sleep, Suddenly a 3 yr old girl appeared and dragged him out of his house.As soon as they left the bungalow lightening struck building and the bungalow collapsed.Peter was shocked, he immediately followed the girl, who playfully entered the meenakshi Amman temple sanctom sanctoram and right in front of his eyes there she disappeared. Peter was sure it was the meenakshi Amman came to rescue in the form of mysterious girl. The ruler goddess Meenakshi had come down to save a good man from calamity. Peter was ever grateful to mother meenakshi and donated many gold & jewelry gifts, these are displayed even today and kept in museum.

Here is the scientific evidence by nasa that moon split into 2. And re-joined.

Allah says in Quran that Moon split into two and re-joined.

May God show u the right path.

@ True Indian, I feel presence of God in my path. I feel blessed. You may call it split personality. But I think it works very well. I just love it...

@ TRUE INDIAN, TIRUNARAYANAN OF MELKOTE & BIBI THULLUKKA NACHIYAR. In 1311 A.D., Mallik Kafur had carried out lightining raid on this temple and took away the golden idol of the lord to Delhi. But as luck would have it, his daughter Thulukka fell in love

@ TRUE INDIAN, are u in skype?

\Those whose intelligence has been stolen by material desires surrender unto demigods and follow the particular rules and regulations of worship according to their own natures.\"
[Bhagavad Gita 7:20]

O Arjuna, those who devotedly worship different demigods, although faithfully, they also worship me only

Correctly said. Unauthorized manner means in wrong way. Just u can make right way. But worshipping one true God. Whose image cannot be seen in this world. No where in vedas shows the picture of krishna or rama.

@True indian, Do you know what it means - \ sink deeper into darkness\""

U ur self answered to ur question. I.e in unauthorized manner. Wrong is wrong.

U have to fight fo

For eg: if u throw out ur parents. And bring Beggar from the street. And u look after them very well. Thinking that this will reach ur parents.