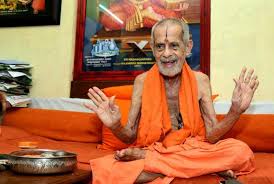 Belagavi, Apr 15: The next government, irrespective of its party, will have to construct the Ram temple at the land of Babri Masjid, according to Vishwesha Tirtha Swami of Pejawar Mutt.

Speaking to media persons here the sere said the temple and the mosque can co-exist at Ayodhya, but the mosque should be at a distance from the temple to avoid any dispute.

“I stand by my view that Ram mandir should be built at Ayodhya. However, it has to be done according to rules. The Parliament and Constitution are the ultimate authorities. I will not speak in detail as elections are under way,” he said.

“People will decide who will form the next government,” he said in response to a question.

The seer told presspersons at the Vidyarthi Bhavan in Tilakwadi that the Narendra Modi government had promised to build the temple, but could not do it in this term owing to some reasons. “Some parties and leaders like Mamata Banerjee and Mayawati have opposed it. The Congress has not clarified its stand on the issue. Moreover, the issue is in court. What can the Union government do now?,” he asked.

On the Lingayat issue, he said: “Lingayats are Hindus. All those who worship Lord Shiva are Hindus. The Lingayats and Veerashaivas should not be separate entities. They should not move away from Hinduism. Minister M.B. Patil may oppose this and say that I should not speak about issues concerning them. But is it wrong to speak out when our brothers want to separate from us?” he wondered.

He said he was planning to organise an Iftar dinner for Muslims in the Udupi mutt this year too.

The seer said that the Udupi Krishna Mutt had organised a series of religious and welfare programmes on the 5th Paryaya (alternative worship ritual).

The Ananda Teertha residential school and college will be set up in the birth place of Pajaka near Udupi. Education would be provided free of cost. Students will be taught the Hindu way of life and culture. Students of all communities are welcome, he said.

An education institution will be set up in Hubballi for the benefit of the people of north Karnataka. A hostel is being built in Maratha Halli near Bengaluru, he said.

this guy is not saint he is dalal of BJP....he put ornage cloth to fool people of DK....no hindu religion teaches to worship IDOL or stone made by man....this is totally foolishness..

GOD created man to worship him alone not the material made by GOD...understant hindu scripture...brahmin hide this from common hindu so they will gain wealth, power & evevything....

my dear hindus open you book veda and read what it says...come to the common terms....never ever trust this man who is criminal and burn in hell fire after his death...

Your comments are most welcome.

Babri Masjid was there in the same place and let it be there.  why dont you build a Mandir at a distance from the Masjid where it is located since years.

So far no evidence has been provided or collected by the court to provide the judgement in favor of Mandir.