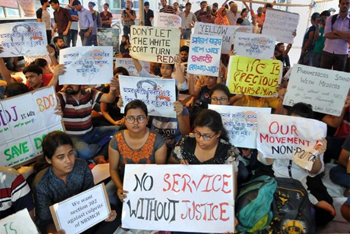 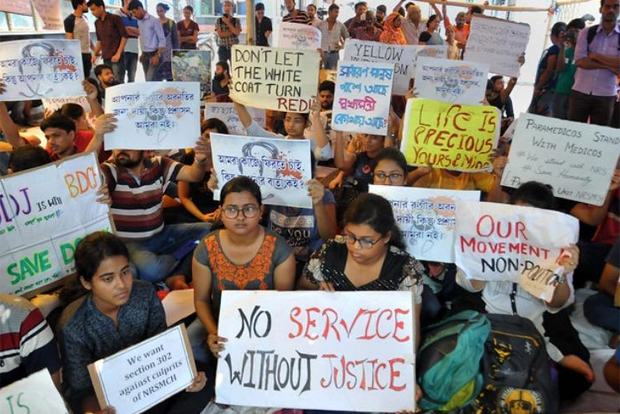 Bengaluru, Jun 17: Hundreds of private hospitals, nursing homes and clinics in Karnataka suspended outpatient services on Monday following a call by the Indian Medical Association to hold a day-long strike in solidarity with the doctors sitting on a protest in West Bengal.

The strike had a telling effect as people were seen struggling to get medical aid in private hospitals.

However, the government hospitals remained open as usual following a circular by the Commissioner of Health and Family Welfare.

Health department sources said there was heavy rush at government hospitals since morning.

The IMA did not heed to state Health Minister S S Patil's appeal to keep the strike symbolic and not cause much trouble to people.

Junior doctors in West Bengal are on strike since June 11 after two of their colleagues were attacked and seriously injured allegedly by relatives of a patient who died at the NRS Medical College and Hospital in Kolkata.

In a show of solidarity with their counterparts in Bengal, medical practitioners across the country have chosen to keep away from work.

Amazing .... it is just to make sure next time I make a mistake and public hits me or I do some thing unethical with patients and public kicks me .... I would have support of all the doctors to prevent me from getting booted . Such educated guys who supposed to be doing a noble job get on to all this now . Their are many ways to protest with public service in mind . Gone are those good old days where doctors were treated as gods ... it all now business and masti ..

DId any one protested when Dr kafeel in UP had suffered from maron yogi...no one right

you dont have rights to protest now, get lost marons...god will cure all dieseas.

if people dont go Private hospital for 2 week all hospital wil be shut down...