Mumbai, Jan 24: Groping a minor's breast without "skin to skin contact" cannot be termed as sexual assault as defined under the Protection of Children from Sexual Offences (POCSO) Act, the Bombay High Court has said.

Justice Pushpa Ganediwala of the Nagpur bench of the Bombay High Court, in a judgement passed on January 19, the detailed copy of which was made available now, held that there must be "skin to skin contact with sexual intent" for an act to be considered sexual assault.

She said in her verdict that mere groping will not fall under the definition of sexual assault.

Justice Ganediwala modified the order of a sessions court, which had sentenced a 39-year-old man to three years of imprisonment for sexually assaulting a 12-year-old girl.

As per the prosecution and the minor victim's testimony in court, in December 2016, the accused, one Satish, had taken the girl to his house in Nagpur on the pretext of giving her something to eat.

Once there, he gripped her breast and attempted to remove her clothes, Justice Ganediwala recorded in her verdict.

However, since he groped her without removing her clothes, the offence cannot be termed as sexual assault and, instead, constitutes the offence of outraging a woman's modesty under IPC section 354, the high court held.

"Considering the stringent nature of punishment provided for the offence (under POCSO), in the opinion of this court, stricter proof and serious allegations are required," HC said.

"The act of pressing of breast of the child aged 12 years, in the absence of any specific detail as to whether the top was removed or whether he inserted his hand inside the top and pressed her breast, would not fall in the definition of sexual assault," it said.

Justice Ganediwala further said in her verdict that "the act of pressing breast can be a criminal force to a woman/ girl with the intention to outrage her modesty".

The court, in its verdict, held that this "physical contact" mentioned in the definition of sexual assault must be "skin to skin" or direct physical contact.

"Admittedly, it is not the case of the prosecution that the appellant removed her top and pressed her breast. As such, there is no direct physical contact i.e. skin to skin with sexual intent without penetration," the HC said.

Did you know? Each Indian wastes 50 kg of food per year! 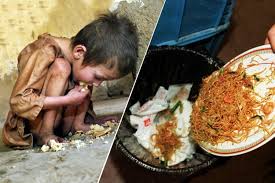 An estimated 931 million tonnes of food was wasted globally in 2019, enough to circle the Earth seven times, according to a UN report which said that household food waste in India is about 68.7 million tonnes a year.

The Food Waste Index Report 2021, from the United Nations Environment Programme (UNEP) and partner organisation WRAP, said that around 931 million tonnes of food waste was generated in 2019, sixty-one per cent of which came from households, 26 per cent from foodservice and 13 per cent from retail.
“This suggests that 17 per cent of total global food production may be wasted,” it said.

The report looks at food waste that occurs in retail outlets, restaurants and homes – counting both food and inedible parts like bones and shells and presents the most comprehensive food waste data collection, analysis and modelling to date.

It finds that in nearly every country that has measured food waste, it was substantial, regardless of income level.

It shows that most of this waste comes from households, which discard 11 per cent of the total food available at the consumption stage of the supply chain.

Food services and retail outlets waste 5 per cent and 2 per cent respectively.

On a global per capita-level, 121 kgs of consumer-level food is wasted each year, with 74 kgs of this happening in households, the UNEP said in a statement.

“If we want to get serious about tackling climate change, nature and biodiversity loss, and pollution and waste, businesses, governments and citizens around the world have to do their part to reduce food waste,” Executive Director of the UNEP Inger Andersen said.

The report said that food waste has substantial environmental, social and economic impacts. At a time when climate action is still lagging, 8-10 per cent of global greenhouse gas emissions are associated with food that is not consumed, when losses before consumer level are taken into account.

“Reducing food waste would cut greenhouse gas emissions, slow the destruction of nature through land conversion and pollution, enhance the availability of food and thus reduce hunger and save money at a time of global recession,” Andersen said.

The report noted that with 690 million people affected by hunger in 2019, an estimate that is expected to rise sharply due to the Covid-19 pandemic, and three billion people unable to afford a healthy diet, consumers need help to reduce food waste at home.

It said countries can raise climate ambition by including food waste in Nationally Determined Contributions to the Paris Agreement while strengthening food security and cutting costs to households.

“For a long time, it was assumed that food waste in the home was a significant problem only in developed countries,” said Marcus Gover, CEO of WRAP.

“With the publication of the Food Waste Index report, we see that things are not so clear cut. With only nine years to go, we will not achieve SDG 12 Target 3 if we do not significantly increase investment in tackling food waste in the home globally. This must be a priority for governments, international organisations, businesses and philanthropic foundations,” Gover said.

Sustainable Development Goal (SDG) target 12.3 aims at halving per-capita global food waste at the retail and consumer levels and reducing food losses along production and supply chains. One of the two indicators for the target is the Food Waste Index.

Andersen said that there is growing evidence of success in reducing food waste – though not at the scale needed to achieve the target.

“Much more can be done. We need, for example, to address the role of consumer behaviour, in all cultural contexts, in achieving the target. Let us all shop carefully, cook creatively and make wasting food anywhere socially unacceptable while we strive to provide healthy, sustainable diets to all,” Andersen added.

Domestic airlines can now give concessions in air ticket fares to passengers who have no baggage or only cabin baggage, aviation watchdog Directorate General of Civil Aviation (DGCA) has said in a circular.

At present, passengers can carry up to 7 kilograms of cabin baggage and 15 kilograms of check-in baggage. Any additional weight is charged per kg basis.

According to the new rules, airlines will be allowed to provide tickets cheaper to those who travel with no baggage or only with cabin baggage within the permissible weight limit, for which passengers have to declare the weight of their baggage at the time of booking tickets.

Mangaluru, Mar 4: With a score of 53.95, Karnataka’s coastal city of Mangaluru was placed in 20th position in ‘Less Than Million category’ of Ease of Living Index (EoLI) 2020.

Mangaluru by scoring 38.16 had secured 42nd position in the ‘Less Than Million category’ in the Municipal Performance Index (MPI) 2020, according to the results of second edition of EoLI and MPI, made public by Smart Cities Mission, Ministry of Housing and Urban Affairs (MoHUA) on Thursday.

In the previous survey held in 2017, Mangaluru was placed in 41st position in the Ease of Living Index.

According to sources in Mangaluru Smart City Limited (MSCL), EoLI is an assessment tool that evaluates the quality of life and the impact of various initiatives for urban development.

It provides a comprehensive understanding of cities based on services available, administration efficiency, and other conditions.

The MPI was launched to examine local government practice in municipalities across areas of services, finance, and governance. The Citizen Perception Survey (CPS) was undertaken to help validate citizens’ experience of their cities in terms of service delivery.

Mayor Premananda Shetty said Mangaluru’s ranking would have been better if more citizens had participated in the survey.

Mishra recollected that in the previous hearing, they had informed the court that they were strictly adhering to standard operation procedures in handling Construction and Demolition (C&D) waste.