New Delhi, Aug 2: The Supreme Court on Monday declined to consider a plea for bail to 53-year-old Kerala Catholic priest Robin Vadakkumchery to allow him to marry the girl whom he raped and impregnated when she was a minor.

A bench presided over by Justice Vineet Saran refused to entertain a special leave petition filed by the victim to permit her to marry the convicted priest.

Senior advocate Kiran Suri said the accused should be released to let him marry the victim.

The bench, however, asked him to go to the trial court.

Appearing for the accused, Advocate Amit George submitted that he sought bail so that he would be able to marry the petitioner. He also claimed that it was his fundamental right to marry the victim.

The bench, however, said the High Court has taken into consideration all the aspects of the matter, therefore we don't intend to interfere in the matter.

Vadakkumchery was sentenced to 20 years in jail on February 17, 2019, under the Protection of Children from Sexual Offences Act. He was dismissed from priesthood by the Vatican.

Earlier, the Kerala High Court had turned down the plea by the convict.

The priest was arrested on February 27, 2017, near Kochi International airport when he was trying to slip out of the country. The case against him was lodged by a child line agency. The girl, who was a student of class XI, gave birth to a child on February 7, 2017, at a hospital run by the management. During the trial, the victim and her mother had turned hostile.

Speaking to media persons, here on Wednesday, he said, "Kumaraswamy must visit RSS shakha once and stay there for about a week to inspect the activities. RSS has been playing a key role in instilling patriotism among people for the past several years. RSS uses educational institutes in the country to achieve this target. Prime Minister Narendra Modi and President Ram Nath Kovi are also volunteers of RSS."

Taunting JD(S) leader, he said, there are volunteers of RSS in JD(S) and former minister PGR Sindhia is one among them and even Congress has many such volunteers. RSS aims to build a strong nation on the basis of patriotism and it does not run after political power.

Referring to the candidates for by-elections to Hanagal and Sindhagi assembly constituencies, the list of probable candidates has been sent to Central leadership and the candidates would be announced soon. He exuded confidence that BJP would win both the seats in the by-elections and the party workers are working on these lines.

Mukesh Ambani, Asia’s richest person, joined Jeff Bezos and Elon Musk in the world’s most exclusive wealth club with a fortune of at least $100 billion.

The chairman of India’s Reliance Industries Ltd. entered the rarefied group of 11 men as his conglomerate’s stock climbed to a record on Friday. He’s now worth $100.6 billion, according to the Bloomberg Billionaires Index, after his wealth increased by $23.8 billion this year.

Mukesh Ambani, chairman and managing director of the Reliance Industries Ltd., right, and his wife Nita Ambani, left, arrive for the company's annual general meeting in Mumbai, India, on Monday, August 12, 2019. Saudi Aramco will buy a 20% stake in the oil-to-chemicals business of India’s Reliance Industries Ltd., including the 1.24 million barrels-a-day Jamnagar refining complex on the country’s west coast, Ambani said at the company’s annual general meeting in Mumbai.

Since inheriting the oil-refining and petrochemicals businesses of his late father’s empire in 2005, Ambani, 64, has been seeking to transform the energy giant into a retail, technology and e-commerce titan. His telecommunications unit, which started services in 2016, is now the dominant carrier in the Indian market. His retail and technology ventures raised about $27 billion last year, selling stakes to investors ranging from Facebook Inc. and Google to KKR & Co. and Silver Lake.

Ambani unveiled an ambitious push into green energy in June, with a planned investment of about $10 billion over three years. And last month, the mogul said his company would “aggressively” pursue production of cheaper green hydrogen. The plan aligns with Prime Minister Narendra Modi’s ambitions of turning India into a global manufacturing hub for the cleaner fuel to combat climate change and slash energy imports by the world’s third-biggest oil consumer.

While Ambani’s announcement has been viewed by some as an acknowledgment that his group needs to look beyond oil to cement its future, the fossil fuel still plays a central role at Reliance, accounting for almost 60% of its $73 billion in annual revenue. The oil-to-chemicals business is now a separate unit, and talks are under way to get Saudi Arabian Oil Co. as an investor.

“Mukesh Ambani is at the forefront of creating new businesses with new emerging technologies,” said Chakri Lokapriya, chief investment officer at TCG Asset Management Co. in Mumbai. “Creating businesses of scale at speed brings execution challenges, but he has demonstrated his capabilities.”

The story of Reliance dates back to the late 1960s when Dhirubhai Ambani, who started out as a gas-station attendant in Yemen, began building his polyester business into a vast empire. When he died of a stroke in 2002 without leaving a will, a succession feud erupted between his two sons, Mukesh and Anil, 62, which was eventually settled by the siblings’ mother, Kokilaben, in 2005.

Under the truce agreement, Mukesh got control of the flagship oil refining and petrochemicals businesses, while his younger brother got newer areas such as power generation, financial services and telecommunications services. Anil -- once a billionaire -- told a London court last year that his net worth was “zero.”

India’s billionaires are some of the largest gainers on the world’s rich list, as Asia’s best-performing major stock market this year gets a boost from a surge in initial public offerings.

Gautam Adani, founder of coal-power and renewable energy conglomerate Adani Group, has added $39.5 billion to his fortune this year, while the country’s third-richest person, technology tycoon Azim Premji, saw his wealth to grow by $12.8 billion. 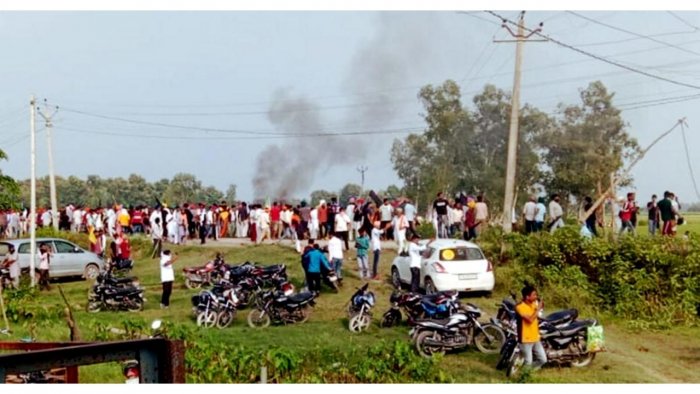 Violence erupted in Uttar Pradesh's Lakhimpur-Kheri district on Sunday, October 3, after a vehicle of Union minister Ajay Mishra's cavalcade knocked down several farmers while the latter were protesting against the farm laws.

Farmer leaders claimed that two farmers were killed while around a dozen others were injured after being knocked by a vehicle, which, they alleged, was being driven by Ajai Mishra's son Ashish Mishra.

Meanwhile, Ajay Mishra said that three BJP workers and a driver were beaten to death by "some elements" in the protesting farmers after a car in which they were travelling turned turtle following pelting of stones.

He claimed that two farmers had died after coming under the car.

The Union minister of state for home said neither his son nor he was present at the site when the incident occurred.

He said the incident happened when some BJP workers were going to receive UP Deputy Chief Minister Keshav Prasad Maurya who had come to attend an event at Lakhimpur Kheri.

"Some elements in farmers, who were protesting, showed black flags and pelted stones on the car which turned turtle. Two farmers came under the car and died.

"Three BJP workers and the driver of the car were beaten to death by some people present there," he said, adding he was on his way to get their postmortem done.

Mishra said his son was not present at the spot as alleged by some farmer leaders and he has photographic and video evidence to prove it.

UP Police take stern action against Ashish Mishra who behaved as a subhuman. Most UP Brahmin politicians and executives children have styled themselves as Gods and have no respect for the law and order. Ashish Mishra is a great danger to society and a rarest of rare. The judiciary be firm and fair to establish law and order in UP, India.
Ramesh Mishra
Victoria, BC, CANADA