Yesterday, the district had recorded 183 cases. Today more cases were reported from Bantwal and Ullal regions.

According to sources, a 48-year-old man from Boloor, who was under treatment for covid-19 at designated covid hospital passed away today.

A 62-year-old covid patient, who had SARI symptoms, breathed his last at a private hospital.

With this, the total number of deaths of covid-19 patients in the district reached 30 including two deaths caused by other reasons.

Of the 167 who tested positive on Thursday, 110 are males and 57 females including seven children.

Three have returned from Qatar and Dubai, one from Bengaluru, 42 are diagnosed with influenza-like illness (ILI), six are diagnosed with severe acute respiratory illness (SARI) and 64 are primary contacts of earlier patients. Contact tracing process of 38 patients is on, and 13 pre-surgery samples. 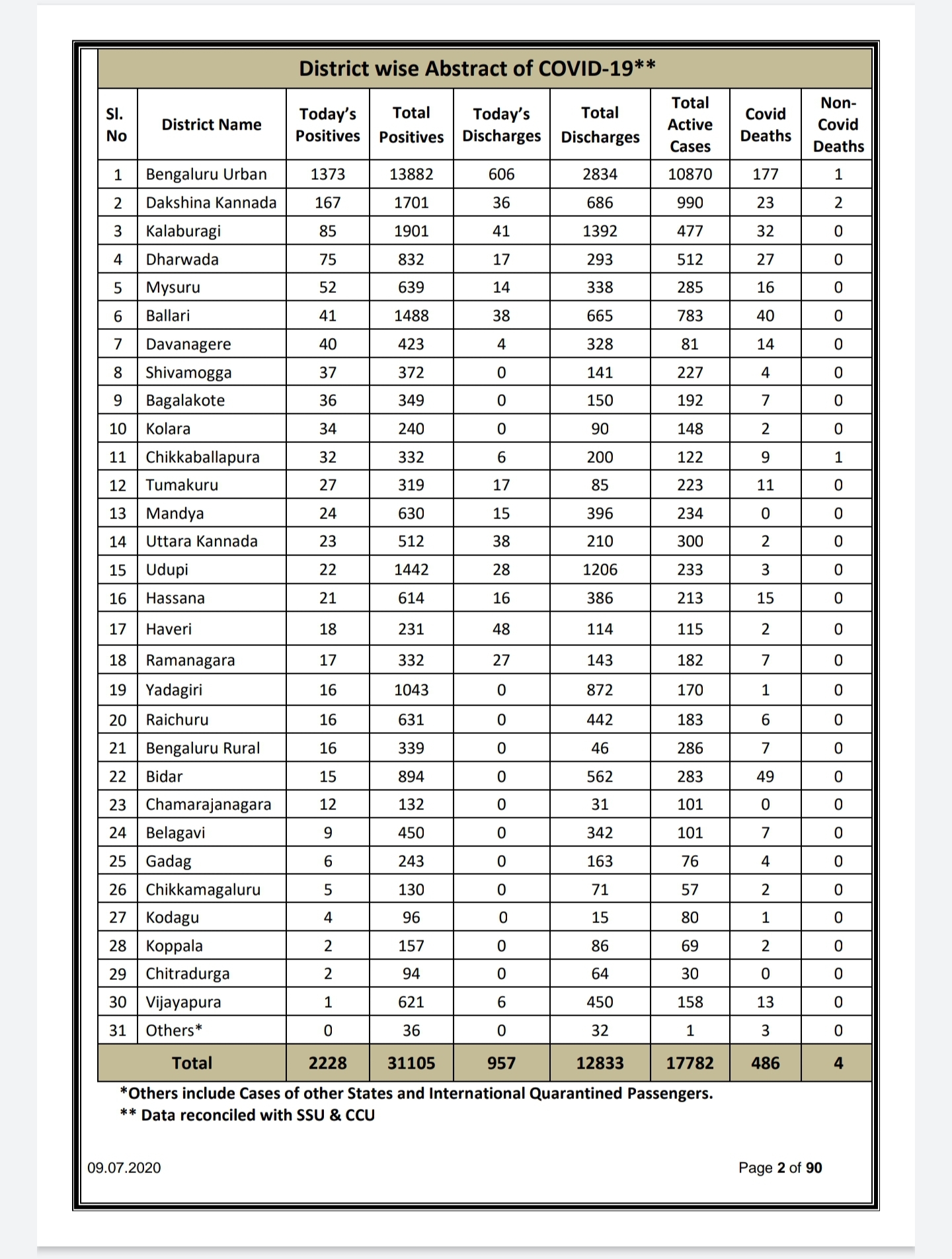 Davangere, Jul 19: A 9-year-old sniffer dog ran 12 km in the night to trace a murder accused and helped the police arrest him in Karnataka's Davangere rural area, an official said on Sunday.

"Doberman Pincher Tunga ran 12 km non-stop from the crime spot at Basavapattana in the city to a house at Kashipur in the rural where murder accused Chethan, 25, was hiding and helped us arrest him on July 17," Davangere Police Superintendent Hanumantha Rai said on phone.

Davangere is 260 km northwest of Bengaluru.

"Though Chethan allegedly shot dead his friend Chandra Nayak with a stolen service revolver on July 10 over sharing the booty (gold ornaments) of the theft they had committed recently with two others. We took female dog Tunga to the crime spot on July 16. She led the sleuths to the area where Chethan was hiding with two accomplices," Rai recalled.

While trained sniffer dogs normally run 4-5 km from a crime spot, Tunga could track the accused 12 km away.

When Tunga's handler (Head Constable Prakash) took her to the crime scene at 9.30 pm, she sniffed around and ran 12 km non-stop to Kashipur. She halted at a wine shop and went to a food joint later. Then she stopped at a house nearby at 12.30 am.

The prime accused (Chethan) was present in the house of his relative. He was arrested after he confessed to the theft and the murder.

The police are on the hunt to trace Chethan's two accomplices who fled from the house they were hiding in.

Karnataka Additional Director General of Police (law and order) Amar Kumar Pandey felicitated Tunga on July 17 at a function here for cracking the murder case with its exceptional sniffing traits.

Bengaluru, Jul 15: Karnataka on Wednesday reported 3,176 new cases taking the total count of cases in the state to 47,253.

A total of 1,975 new cases were reported from the Bengaluru alone, the state's health department said.

The toll has gone up to 928 with 87 deaths reported today.

Sachin Pilot's future is in Congress only: Veerappa Moily

Bengaluru, Jul 16: Former union minister and Senior Congress leader Veerappa Moily on Wednesday said that if at all there is a political future for Sachin Pilot it is in the Congress party.

While speaking to news agency, Moily said Sachin Pilot achieved everything by being in Congress party.

"Sachin Pilot became MP, union minister in UPA-II, PCC president in Rajasthan and Deputy Chief Minister of Rajasthan. Whatever grievances you have, it needs to be resolved within the forum of the party. There is no hurry for Sachin Pilot. If at all there is a future for him it is in the Congress party. He has to realise that. He says he won't join BJP, it is good," Moily said.

The former Union Minister Moily further said that Pilot could not become Chief Minister as in Congress, the high command sends an observer and opinion of MLAs is ascertained, be it in Madhya Pradesh or Rajasthan.

"The leader who enjoys the support of elected MLAs is made Chief Minister," Moily said.
On July 14, Congress party had sacked Sachin Pilot from the post of Deputy Chief Minister of Rajasthan and also from PCC president.

The Rajasthan Congress is in turmoil over the past few days. State Chief Minister Ashok Gehlot has blamed the BJP for attempting to destabilise the state government by poaching MLAs. The Congress government in the state is facing a political crisis after simmering differences between Pilot and Ashok Gehlot came out in the open.

A controversy broke out in Rajasthan after Special Operation Group (SOG) sent a notice to Pilot to record his statement in the case registered by SOG in the alleged poaching of Congress MLAs in the state.