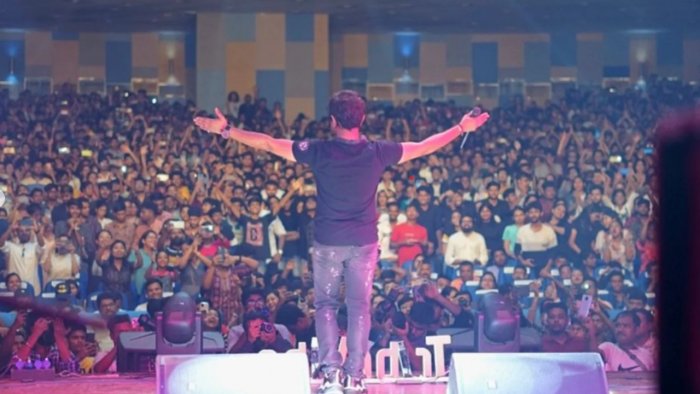 Kolkata, June 1: Kolkata Police has registered a case of unnatural death over the demise of renowned Bollywood singer Krishnakumar Kunnath popularly known as KK, a senior officer said on Wednesday.

The case has been lodged with New Market Police Station under whose jurisdiction falls the five-star hotel where KK had put up and felt unwell before being taken to a hospital on Tuesday night, he told PTI.

"We have started an investigation into singer KK's death and a case of unnatural death has been registered with the New Market Police Station. We are talking to the hotel authorities and scrutinising CCTV footage to understand what had happened before he was taken to the hospital," the police officer said, adding that two persons have been questioned in connection with the case.

An initial probe has revealed that the 53-year-old singer, who was on a two-day tour to Kolkata to perform at two college programmes, was "almost mobbed" by fan followers at the hotel where he had returned after performing at Nazrul Mancha auditorium in the southern part of the city, he said.

"The singer had allowed a couple of fan followers to take snaps with him, but then he refused to carry on with the selfie session. He left the lobby and then went upstairs where he had reportedly stumbled and fallen on the floor. People who were with him informed the hotel authorities," the officer said.

KK was then rushed to a private hospital in the southern part of the city where he was declared "brought dead" by doctors, he said, adding that probably because of the fall, the singer had two injuries -- one on the left side of his forehead and another on his lips.

"He was brought to the hospital around 10 pm. It's unfortunate that we could not treat him," a senior official of the hospital said.

Doctors at the hospital said they suspected "cardiac arrest" to be the cause of the death.

A post-mortem examination will be conducted during the day to ascertain the exact cause of his death, he added.

"The autopsy report will throw light on the exact cause of death. We are waiting for it," the police officer said.

Meanwhile, the singer's wife reached the city and went to the hospital where his body has been kept.

"The sudden and untimely demise of the Bollywood playback singer KK shocks and saddens us. My colleagues have been working from last night to ensure that all requisite support is given for necessary formalities, his rites and to his family now. My deep condolences," she tweeted.

Banerjee, while speaking at a programme in Bankura, said she has cut short her tour and will try to reach Netaji Subhas Chandra Bose International Airport in Kolkata and pay her last respects to the mortal remains of KK. She said the state police will give gun salute to the deceased singer. "KK was a youth icon. We have lost a great singer. I have spoken to his wife who has arrived in Kolkata. Depending on the weather condition, I will try to reach NSCBI Airport to pay last respect to the singer. The state police will give gun salute to him," she said.

The singer had performed at Nazrul Mancha on Monday evening also in a concert organised by Vivekananda College. He was scheduled to return to New Delhi on Wednesday.

A versatile singer, KK has also recorded songs in Tamil, Telugu, Kannada, Malayalam, Marathi and Bengali, among other languages.

New Delhi, June 16: Amid protests against the Centre's Agnipath scheme, Congress leader Rahul Gandhi on Thursday urged Prime Minister Narendra Modi to listen to the voice of unemployed youths and don't take 'agnipareeksha (trial by fire)' of their patience by making them walk on 'Agnipath'.

Protests against the Centre's 'Agnipath' scheme for hiring jawans on a short-term contractual basis were reported from various parts of the country on Thursday.

"No rank, no pension, no direct recruitment for 2 years, no stable future after four years, no respect shown by the government for the army," Gandhi said in a tweet in Hindi, attacking the Centre over the scheme.

"Listen to the voice of unemployed youths of the country, don't take 'agnipareeksha' of their patience by making them walk on 'Agnipath', Mr. prime minister," the former Congress chief said.

Attacking the government over the 'Agnipath' scheme, Gandhi had warned on Wednesday that it will reduce the operational effectiveness of the armed forces whose dignity and valour must not be compromised.

Congress general secretary Priyanka Gandhi Vadra had also hit out at the government and asked why it was making recruitment in the army its "laboratory".

The government unveiled "Agnipath" on Tuesday -- calling it a "transformative" scheme-- for the recruitment of soldiers in the Army, Navy and the Air Force, largely on a four-year short-term contractual basis, in a major overhaul of the decades-old selection process to bring in fitter and younger troops to deal with future security challenges facing the nation.

Under the scheme, around 46,000 soldiers will be recruited this year between the ages of 17-and-a-half years and 21 years into the three services, the Defence ministry said.

The recruitment will be based on an "all India, all-class" basis that is set to change the composition of several regiments that recruit youths from specific regions as well as castes such as Rajputs, Jats and Sikhs.

After the completion of the four-year tenure of the recruits, the scheme provides for retaining 25 per cent of each specific batch for regular service, based on organisational requirements and policies promulgated by the armed forces from time to time.