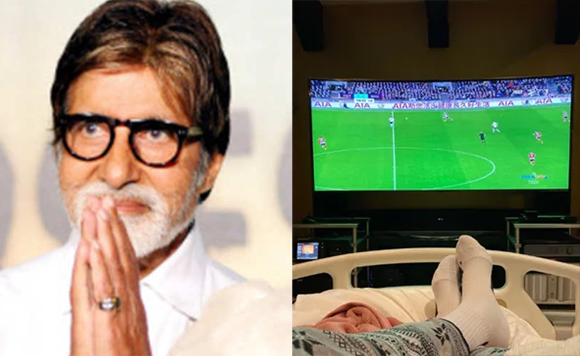 Mumbai, Nov 11: Megastar Amitabh Bachchan posted a picture of him resting on a bed and said "cracks and breaks" he's facing need to heal before he starts shooting.

The 77-year-old actor posted on his blog a picture of him watching a soccer match, writing he was "lying around" in his spare time, "skipping time to go by in rapid form".

"And reminiscing the work front by the day after when there shall be the chair and the computer Ji and the audience (referring his show 'KBC').

"But first the leftovers of incidents from the times of 'Don' and the cracks and breaks now playing up and placing themselves in important avenues which restrict movement...At times of this it may be of interest too...to the body, but not the mind. So one listens to the body...and many shall there be who will applaud and commit to saying...' did we not tell you this to slow down...' Slow down? That's what you tell the vehicle or the train on road and track ....so...what (sic)," he added.

On Saturday, Bachchan regretted having missed the inaugural ceremony of 25th Kolkata International Film Festival which he had been attending for the past six years.

The actor wrote that while he's sad he won't be physically present, he's trying to send across a video to the festival.

"Sad and in regret to not be able to travel for KIFF to Kolkata....an event that has invited me for years...I think now 7 years....and the speech...glorifying cinema and the research by educated assists from dear friends...gone..but there is communication established whether I could read it on video and send to them to be played at the closing," he added.