Los Angeles, Jul 9: Actor Cameron Boyce, best known for his performance in the Disney Channel's television shows and series, has died at age 20. 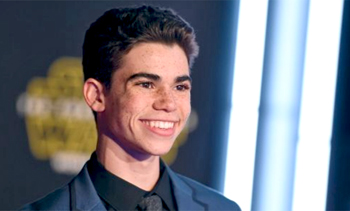 According to ABC News, the actor passed away on Saturday morning after suffering a seizure as a result of "an ongoing medical condition".

"It is with a profoundly heavy heart that we report that this morning we lost Cameron. He passed away in his sleep due to a seizure which was a result of an ongoing medical condition for which he was being treated. The world is now undoubtedly without one of its brightest lights, but his spirit will live on through the kindness and compassion of all who knew and loved him.

"We are utterly heartbroken and ask for privacy during this immensely difficult time as we grieve the loss of our precious son and brother," a spokesperson for the Boyce family said in a statement.

Cameron became popular with his role on Disney Channel's "Jessie" and in the "Descendants" movies. The third film in the franchise will release in August.

He also was the voice of Jake in "Jake and the Never Land Pirates" series.

Born in LA, Boyce made his acting debut at the age of nine with the horror film "Mirrors". Two years later, he appeared in Adam Sandler'-fronted "Grown Ups," as one of his children.

"Jessie" was his breakthrough and he soon became one of the biggest Disney Channel stars.

Cameron was also set to appear as a series regular in HBO's "Mrs Fletcher," starring Kathryn Hahn, and the TV spin-off of the film "American Satan," called "Paradise City," about rock stars navigating the music industry.

"Cameron, You left a big piece of your heart for those of us who knew and loved you in this life and you left with a big piece of our hearts today. We will continue to carry your loving spirit forward. You are our forever boy.

"In your short time on this earth, you lit it up with your incomparable talent and goodness. I will be forever grateful to have known and worked with you. Thank you for sharing your amazing gifts with us all. God Bless you and may God watch over your Incredible and loving Family during this difficult time. Only Love," Kenny wrote alongside a photo from the sets of the film.