New Delhi, Mar 25: The Congress said on Wednesday that it stood with Prime Minister Narendra Modi on his appeal for 21-day lockdown but was "deeply disappointed by the lack of coherent strategy" and demanded that Rs 7,500 should be transferred to every Jan Dhan, PM Kisan and pension account to tide over the nutrition needs for 21-days.
It also demanded that the Public Distribution System (PDS) ration should be given free.
In a series of tweets, Congress Communications in-charge Randeep Singh Surejwala said that the need of the hour was to implement 'Minimum Income Guarantee Scheme' (Nyay) mooted by the Congress and party leader Rahul Gandhi.
"Please transfer Rs 7,500 to every Jan Dhan, PM Kisan, and every pension account to tide over nutrition needs of 21 days and give free PDS ration. We will rise together as a nation and defeat COVID-19. We stand with lockdown but are deeply disappointed by the lack of coherent strategy or a clear 'way ahead' on your part," he said.
Surjewala asked what steps the government took despite an early warning about COVID-19 and sought details about isolation beds and ventilators available to people.
"Dear PM, India will adhere to the lockdown but what steps did the govt take to tackle the corona pandemic despite early warnings in Feb? When will doctors, nurses and health workers have adequate protection? How many 'isolation beds' and ventilators are available and where?" he said.
He asked how daily wagers and labourers will sustain during the 21-day lockdown.
"What's your plan to address the huge issue of bread and butter and livelihood for millions? How will daily wagers, labourers, MGNREGA workers, factory workers, unorganised workers, fishermen, farmers and farm labour sustain for 21 days?" he asked.
Surjewala said the crying need is to arm doctors, nurses and health workers with personal protection equipment and asked: "why are N-95 masks, Hazmat suits not available?"
"In March itself, India needs 7.25 lakh bodysuits, 60 lakh N-95 masks, 1 crore 3 ply masks? When will they be available?" he asked.
Surjewala said that the government banned the export of ventilators, respiratory devices and sanitisers only yesterday on March 24, "84 days after the spread of COVID-19."
"Is this your government's 'Modus operandi' to fight coronavirus? Too little, Too late!," he said.
Noting that two-thirds of the country's population is engaged in agriculture, he said that Prime Minister Modi did not refer to farmers during his address to the nation and demanded a moratorium on farmers' loans.
"Crop is ready for harvest in March itself. How will it be harvested and sold and who will buy at fair price? Indebtedness relief to farmers is the only way forward in these testing times. Please put a moratorium on farmers' loans and recoveries. Please ensure the procurement of crops at MSP. Let's not forget that farmers are the backbone of India's economy," he said.
Surjewala said the Prime Minister gave only four hours to prepare for 21-day lockdown.
"Did you think of over 5 lakh truck drivers, who are now stranded on roads? Did you think of millions of workers, who are stranded in cities away from home without food or money? What should they do," he asked. 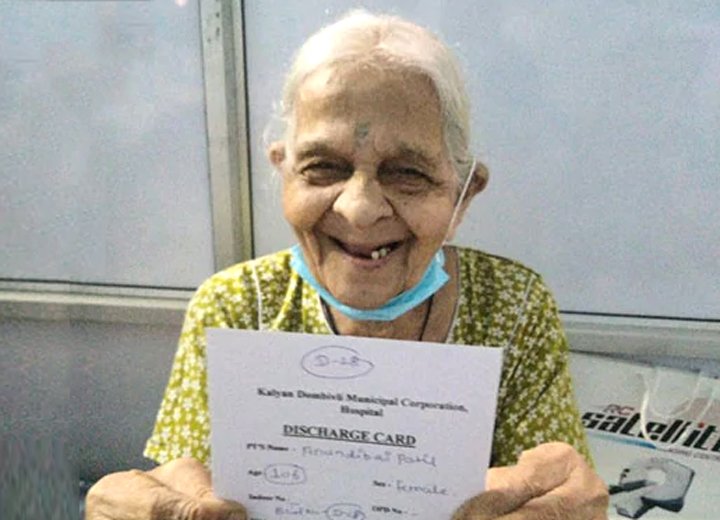 Thane, Sept 20: A 106-year-old woman from Maharashtra's Thane district defeated COVID-19 and was discharged from hospital on Sunday with doctors and nurses giving her a warm farewell.

With happiness writ large on her face, the woman proudly displayed her discharge certificate to the media before walking out of the hospital after a 10-day stay.

After the Dombivli-based centenarian contracted the disease, no hospital was initially ready to admit her due to her age, said her daughter-in-law, who were happy to see her mother-in-law discharged from the hospital after recovering from the disease.

She was finally admitted 10 days back to the COVID-19 treatment facility set up by the Kalyan Dombivli Municipal Corporation (KDMC) at Savlaram Krida Sankul (sports complex) and doctors and medical teams there took proper care of her, the daughter-in-law said.

"We are really thankful to the hospital's medical team who took proper care of her and helped her in defeating the coronavirus," she said.

Dr Rahul Ghule, managing director of ''One Rupee Clinic'' which is managing this COVID-19 treatment facility, appreciated his team for taking care of the elderly woman. "We are happy that she successfully responded to the treatment," he said, adding that the hospital was opened on July 27, and so far it has treated 1,100 COVID-19 patients.

''One Rupee Clinics'', which charge Re 1 per patient for their services, have been set up at select stations on the Central Railway''s suburban section to provide emergency help to rail accident victims and give medical treatment to the general public.

He said the blessings of the woman and many more like her "keep us all going strong".

KDMC spokesperson Madhuri Phopale said so far 38,301 COVID-19 cases have been reported from areas falling under the civic limits and of these, 762 have died due to the disease. 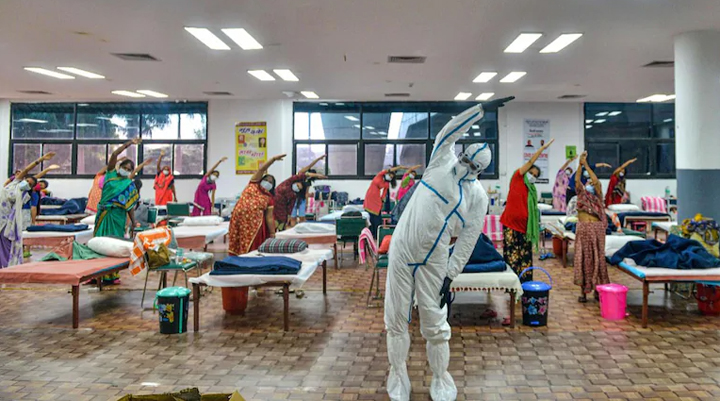 New Delhi, Sept 13: The Ministry of Health and Family Welfare stressed on ayurvedic intervention to manage post-COVID conditions in its latest guidelines issued on Sunday for recovered patients, including use of chyawanprash and AYUSH medicines.

In the guidelines, the Ministry recommended the use of immunity-boosting medicines like Ayush Kwath and Samshamani Vati on a daily basis, for effective recovery from post-COVID health conditions.

"In the clinical practice, chyawanprash is believed to be effective in post-recovery period," a Ministry advisory said while listing yoga, pranayama and daily walks among the other suggestions.

It also suggested involvement in regular household chores, if health permitted. "Professional work should be resumed in a graded manner," the Ministry advisory added.

Stressing the need to self-monitor one's health at home, the Ministry advised recuperating persons to check body temperatures and blood pressure on a regular basis. It also asked them to take oxygen readings on pulse oximeters on the advice of doctors. "Look for early warning signs like high-grade fever, breathlessness, unexplained chest pain, onset of confusion, and focal weakness," it said.

At the community level, the Ministry advised for spread of awareness by recuperating persons about coronavirus by sharing experiences with friends and relatives and through the social media. "The sharing of these experiences on the social media will help create public awareness, dispel myths, and stigma," the advisory read.

They have been accused of asking anti-CAA protesters to go to ¨any extreme¨, spreading discontent in the community by calling CAA/NRC anti-Muslim, and organise demonstrations to “malign the image of the Government of India”.

The names appeared in a supplementary charge sheet, a copy of which is with the PTI, filed by the police on the riots in North East District between February 23 and 26, which claimed 53 lives and left 581 injured, 97 of them having gunshot wounds.

These eminent personalities have been made accused based on the confessions of three students -- women’s collective Pinjra Tod members and JNU students Devangana Kalita and Natasha Narwal, and Gulfisha Fathima of Jamia Milia Islamia -- in the Jafrabad violence, from where the riots spread to other parts of north-east Delhi.

All three are facing charges under various sections of the Unlawful Activities (Prevention) Act.

In the charge sheet, which was made public just two days before the commencement of the Monsoon Session of Parliament, the Delhi Police has claimed that Kalita and Narwal admitted to not just their complicity in the riots but also named Ghosh, Apoorvanand and Roy as their mentors, who allegedly asked them to carry out the protests against the Citizenship Amendment Act and go to ¨any extreme¨.

Their similarly-worded disclosure statements – mentioned in the charge sheet -- claim the two JNU students said they organised the Daryaganj protest in December and the Jafrafad chakka jam (road block) against the CAA on February 22, 2020 at the behest of Ghosh, Apoorvanand and Roy.

The student-activists also told the police the three coordinated with the Islamist group Popular Front of India (PFI) and the Jamia Coordination Committee to mentor the Pinjra Tod members to carry forward their campaign against the CAA, according to the charge sheet.

The police have used Jamia student Fathima’s statement to corroborate the ensuing events.

The charge sheet claims that apart from Yechury and Yogendra Yadav, Fathima’s statement mentions Bhim Army chief Chandrasekhar, United Against Hate activist Umar Khalid and some leaders from the Muslim community such as ex-MLA Mateen Ahmed, and MLA Amannatullah Khan.

The document claims they aided the conspirators of the violence.

In her statement, Fathima said that she was told to organise the protest to “malign the image of the Government of India”, the police claimed.

In her statement, included in the charge sheet, she says that ¨big leaders and lawyers started coming in to provoke and mobilize this crowd, including Omar Khalid, Chandrashekhar Ravan, Yogendar Yadav, Sitaram Yechury, and lawyer Mahmood Pracha, etc”.

“Pracha said that the sitting in demonstration is your democratic right and the rest of the leaders filled the feeling of discontent in the community by calling CAA/NRC anti-Muslim¨ she said, according to the charge sheet.

According to the charge sheet, Kalita added, “Umar Khalid had also given some tips for doing protest against CAA/NRC. On the directions of these persons, Umar Khalid''s United Against Hate Group and JCC (Jamia Coordination Committee) & members of our Pinjda Tod (we) together started protest in difierent parts of Delhi.”

Delhi February 2020 Riots Case Supplementary Charge Sheet Filed On 12 September 2020 was a talking point in news media.
According to report in the news media , a supplementary chargesheet in Delhi February 2020 riots case has been filed by Delhi Police on 12 September , 2020 . The names of CPM general secretary Sitaram Yechury , Swaraj Abhiyan leader Yogendra Yadav , economist Jayati Ghosh , Delhi University Professor Apoorvanand and documentary film-maker Rahul Roy are reported to have figured in the narration of statement of one or two accused persons . It becomes clear that the names of said five eminent personalities in Indian politics/social-life/film-life do not figure as accused but their names find a mention in the disclosure statements claimed to have been made by accused person or persons before the police. This circumstance was a talking point in the news media on 13 September. The matter is sub-judice. In the context of such like case or cases , it may be apt to refer readers to this Vedic astrology writer’s one of predictions in article - “ India in the year 2021 - planetary impacts interpreted” - published on 7 September , 2020 at theindiapost.com. It may be mentioned here that a period of four months from September –December 2020 was also covered in addition to 2021 in the said article of 7 September. The related text in the article reads as follows :-
“ The planetary movements towards last four months , particularly November-December in the present year 2020 suggest that questions of commitments or liabilities or discharge , economic or otherwise , look to be arising. Such commitments or liabilities or discharge may have something to do with distant or recent past or even present covering such aspect as……………. telecommunication system and the like. Such subtle activities , passage medium of which happens to be space , may have one or other concern………………………The period between 10 October to 13 November in 2020 is also the one when some powerful or rich organizations or personalities associated therewith in one or more fields such as social , spiritual , political in the country can be in news or focus”.