Bengaluru, May 26: Heavy rain, accompanied by lightning, thunder and strong winds, brought down many trees across the city. The downpour affected power supply plunging many areas into darkness.

The BBMP control rooms were flooded with complaints from citizens. According to officials, more than 15 full-grown trees came down in RPC Layout, Vijayanagar.

Trees fell on parked power lines and on parked vehicles. BBMP sources claimed that around five to six vehicles were damaged. Fortunately, no casualties were reported.

Radio jockey Shruthi and her family were driving down near Sankey signal, Sadashivanagar, when a tree branch fell on the car. “My in-laws and mother were sitting at the back. They could have sustained injuries had they not leaned forward. It was a reflex. The glass shattered on them. Fortunately, none of us was injured,” she said and added that her car bore the brunt of the branch fall.

Ashok Betraj, resident of Kalyan Nagar, said two trees came down and snapped the power lines. “The rains started at 8.30 p.m. and the power supply was disrupted soon after. We have informed the control room to clear the fallen trees. We don’t know when the power supply will be restored,” he said.

According to the Karnataka State Natural Disaster Monitoring Centre, the city could receive heavy rain accompanied with gusty winds, thunder and lightning for another two to three days.

It’s typical of pre-monsoon showers that are expected during this time of the year.

Bengaluru, Aug 5: A red alert has been issued in several districts in Karnataka due to heavy rainfall in the state since last two-three days, the India Meteorological Department said on Wednesday.

For past couple of days rumours were doing rounds on social media that the government has done away with quarantine for international passengers. A few Mangaluru-based news portals also had published it as news without quoting any reliable sources.

Meanwhile, district health officer in his clarification message said that neither Karnataka government nor Dakshina Kannada district administrant has revised the quarantine norms for international passengers.

“Those who arrive from overseas must remain in isolation for 14 days. Out of this, seven days have to be spent in institutional quarantine (in hotel or lodge). During this period, the throat swab sample of the person will be sent for covid-19 testing. If the report is negative, then they will be sent to home quarantine for another seven days."

He said that concession in terms of number of days has only been given for people with other health conditions, children and the elderly. "For children below 10 years, pregnant women, elderly above the age of 60 years and other with other ailments, the throat swab will be collected on the second day of institutional quarantine. If the report turns negative, they will be sent to home quarantine for 14 days." 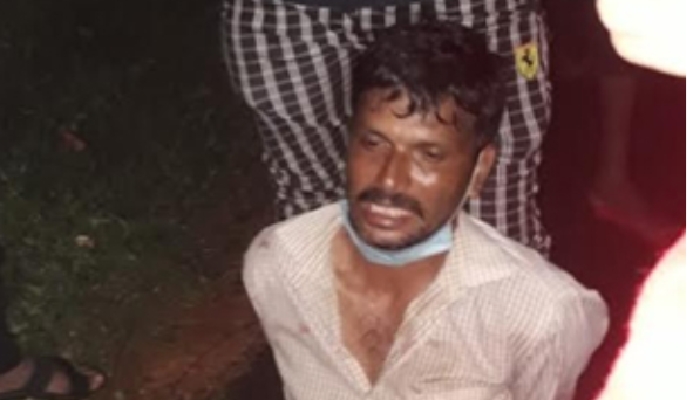 Manjeshwar, Aug 3: In a horrific incident, a man hacked four of his relatives to death at Bayar near Kaniala Gurukumeri in Manjeshwar taluk of Kasaragod district.

According to police, Udaya (40), a resident of Sudanbala, killed three of his maternal uncles and a maternal aunt who were staying together at a house at around 7:30 p.m. today.

Locals caught him and handed him over to the police after tying his hands and legs.

A preliminary investigation revealed that a familial clash led to the gruesome murder. A police team led by Kasargod DSP Balakrishnan are investigating the matter.