Mangalore, May 25: In a controversial demand that may spark widespread uproar, a less popular Hindutva outfit has called for a strict ban on dawn Adhan (Fajr prayer call from Masjids) across India.

On Sunday morning, dozens of Hindutva activists including a controversial swamiji, who had earlier tried to commit suicide, staged a protest in front of the office of Deputy Commissioner in Mangalore to pressurize the authorities concerned to strictly impose ban on Adhan during early morning.

The protest was held under the banner of Rashtriya Hindu Andolan and some of the protesters were displaying the banner of Hindu Janjagruti Samiti, an extremist Hindutva outfit. The protest comes a day ahead of Prime Minister-designate Narendra Modi 's swearing-in ceremony.

Speaking on the occasion, Sanatan Sanstha activist Vijayalakshmi said that even though India has granted religious freedom for all the people, followers of one religion should not misuse this freedom to disturb the followers of other religions in the society.

Using a derogatory word for Adhan, she said that when Muslims shout using loudspeakers every morning they should know that it would disturb sleep of a majority of people in the society.

Hindu Janajagruti Samiti activist Vivek Pai said that the right to sleep peacefully is also comes under the ambit of fundamental rights of every Indian citizen. “The use of loudspeakers should not be permitted from 10 p.m. to 6 a.m. The supreme court also had directed to impose ban on playing loud music or making any type of noise between 10 p.m. and 6 a.m. However, this ban has not been applied to the early morning Adhan,” he said adding that in some places Muslims deliberately cause noise pollution through loudspeakers in the early morning.

He said that those who use loudspeakers for Adhan before 6 a.m. in the morning should be arrested and punished.

Rashtriya Hindu Andolan activist Ramesh Nayak said that many Masjids are located in the area of schools, colleges, hostels and hospitals. Loudspeakers used by such Masjids will always cause problems for students and patients, he added.

Bharat Kranti Sena chief Pranavananda Swami, who had tried to commit suicide in January this year to pressurize government to ban a Christian televangelist 's programme in Bangalore, said that protest against morning Adhan will continue until a strict ban on that ritual will come into force in the entire country. 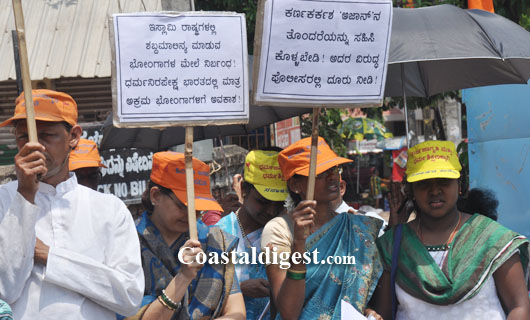 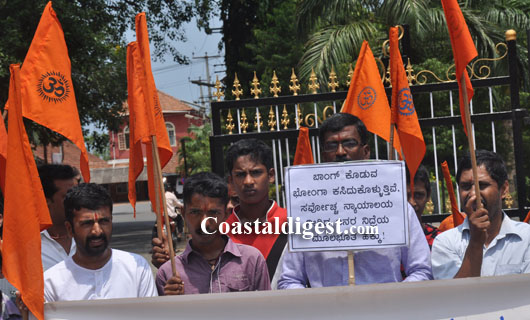 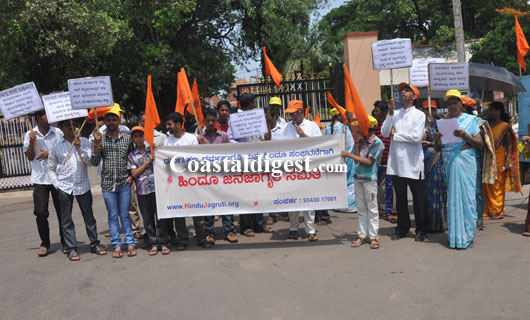 Please ban ringing of the bells and geeta recitation on microphone then we will happily stop the fajr azan..

if you want to ban adhan due to noise pollution ..... than what about crackers you use in diwali and colors mixed in water use in holis which may also harm society in the form of pollution....i am sorry to say that if it is wrong..... islam is a religion of peace.....no one have any authority to ban azaan-e-fajr or any other islamic works .......

Extremists on either side have rarely any agenda to make welfare of this country, its people. Most are found to be hypocrites. I had seen one of them. Brainwashing youngsters for self gain. These people can't be stopped till the end, but they can be suppressed. If good people fail to prevail, all shall perish with the corruption they would spread in land. As far as their demand is concerned, everyone knows how bad a place they all have made their Mangalore.

When india and Pakistan was carved at that time india didn't claim that its going to make a hindu nation. Rather nehru and ghandi asked Muslims to stay in india as this is going to be a secular state. Thats y muslims didn't shift to Pakistan. And now if somebody is forcing muslims to vacate from india then he/she declining the fundamental claims of the founding forefathers of india. If someone denies the dictations of father he/she should be called a bastard who doesnt respect their parents. 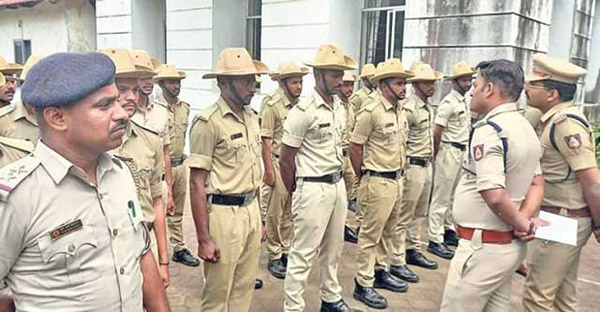 The ATS personnel have been picked from the City Armed Reserve Police. They will operate in two teams of 15-members each and will have a separate uniform, said Police Inspector Subrahmanya M.

Intelligence gathering and operations will be the two important aspects of the ATS. It will exchange information with the State Intelligence and Internal Security Division (ISD) on a regular basis, sources said.

Earlier, at the state level, the Centre for Counter Terrorism attached to the ISD was dealing with issues related to terrorism. At city and district levels, there was no exclusive staff for the job and other officers were given additional charge.

“But now, a full-fledged team will work in the ATS in city police commissionerates and it will be much more effective as the focus is clear and there will be proper flow of information,” a senior official said.

It is said inputs from intelligence agencies about probable terrorism related activities and presence of sleeper cells have prompted the state police to act swiftly in setting up the ATS.

Mangaluru, June 25: Mild tremors felt in parts of Sullia taluk in Dakshina Kannada of Karnataka last night and today morning, according to reports.

These villages fall beneath the Kodagu region on the foothills of the Western Ghats that had witnessed massive landslides and changes in the river course several years ago. Since then the people in the region have been feeling tremors during the onset of monsoon.

Deputy Commissioner K. V. Rajendra said he has been receiving calls about tremors that lasted a few seconds in Sampaje, Aranthod and adjoining regions last night. He was in touch with the state disaster management authority for more information about the tremor, including its magnitude and epicentre.

“The district administration is waiting for confirmation from Karnataka State Disaster Management Cell about the tremor and its magnitude and epicentre," he said.