Ballari, Apr 10: In what could be termed as a case of honour killing, the love story of a Muslim woman and Hindu man met a tragic end as the parents of the former brutally murdered both of them in Hampasagara village of Hagaribommanahalli taluk in Ballari district recently. 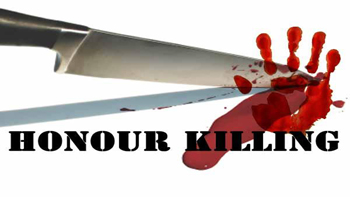 Reshma Banu (22) of Hampasagara was in love with K Nagaraj (22) of a village in Hiriyur taluk of Chitradurga district. On the night of March 24, they were seen in the house of Reshma.

Her father Babu Saheb and his four sons thrashed Nagaraj and pushed away Reshma, who came to Nagaraj’s rescue. Thinking that Nagaraj was dead, they threw him away on the outskirts of the village. Reshma had sustained grievous injuries as her head banged a wall after she was pushed away and she was lying in a pool of blood.

On returning, Babu Saheb found that she was still alive and strangulated her with a pillow, the investigation revealed.

The final rites of Reshma were performed in a hurry. It was projected by her family that she died of a heart attack.?Meanwhile, Nagaraj, who was badly injured, was admitted to a hospital in Davangere on March 25.

However, he died on his way to Manipal hospital on March 31. Circle Police Inspector Kashinath, who investigated the double murder case, said that the assailants had planned to destroy evidence as was shown in the Kannada movie “Drushya.” All the five are now in judicial custody.