'I don't eat a lot of onion, garlic,' says Sitharaman amid debate over price rise

New Delhi, Dec 5: Union Finance Minister Nirmala Sitharaman on Wednesday said that she doesn't eat much of onion or garlic and hailed from a family where these two vegetables were not much in use. 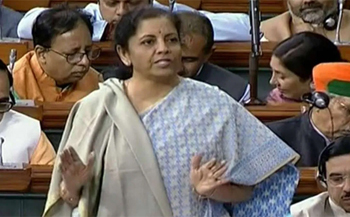 Her remarks about personal eating habits came while responding to interruptions by some opposition members at a time when she was speaking on the onion issue.

"I don't eat much of onion-garlic. I come from such a family which doesn't have much to do with onion", she said.

Prior to it, Lok Sabha MP Supriya Sule had raised the issue of NPAs and onion farmers.

"Why has the production of onion gone down? We export rice and milk and so many other products. Onion grower is a small farmer and he really needs to be protected", Sule had said.

After making a brief admission about not consuming much of onion, Sitharaman elaborated on government's policy for the benefit of onion farmers.

"From 2014, I have been part of some group of ministers which monitors the up's and down in onion market. Sometimes when there is a surplus of the crop, we have also facilitated by giving support to those people who want to import. I have overnight passed orders for helping with 5 to 7 per cent assistance for exporting", she said.

Sitharaman, who was replying to the debate on the first batch of supplementary demands for grants for 2019-20 also said that onion price surge was due to factors such as a reduction in the area of cultivation and production.

Defectors should be banned from holding public office for 5 years, fighting next poll: Kapil Sibal

New Delhi, Jul 19: Amid the political firestorm in Rajasthan following Sachin Pilot's rebellion, senior Congress leader Kapil Sibal on Sunday called for amending the anti-defection law to ban all defectors from holding public office for five years and fighting the next election.

Sibal also said that the "antibodies" against the "virus of corrupt means" to topple elected governments lie in amending the Tenth Schedule of the Constitution (anti-defection law).

His attack comes in the wake of Pilot's open rebellion against the Ashok Gehlot government, which has been on shaky ground since, with at least 18 legislators backing the rebel leader.

Pilot was sacked as deputy chief minister and the state Congress chief earlier this week.

The Congress has accused the BJP of making efforts to topple the Gehlot government by indulging in horse-trading.

"Need for Vaccine: Virus of 'corrupt means' to topple elected governments has spread through a 'Wuhan like facility' in Delhi," Sibal tweeted, in an apparent swipe at the BJP.

"Its 'antibodies' lie in amending the Tenth Schedule. Ban all defectors from: Holding public office for five years, fighting the next election," he said.

Taking a swipe at Pilot over his claim that he is not joining the BJP, Sibal on Thursday had asked what happens to his "ghar wapsi" and whether Rajasthan's dissident legislators are vacationing in Haryana under the "watchful eye" of the saffron party.

In the house of 200, the Congress has 107 MLAs, including the 19 dissidents who have been issued notices of disqualification by the speaker and they have challenged them in the high court.

The Congress has maintained the claim that the Gehlot government has the support of 109 MLAs, including the two BTP MLAs.

I FULLY AGREE WITH MR. KAPIL SIBAL.  IN FACT, IT IS NEED OF THE HOUR TO SAVE OUR DEMOCRACY.

The Indian Defence Ministry, which had in its document that China intruded into the Indian territory in eastern Ladakh in early May, on August 6 took down the page which it had uploaded on its website.

According to a report by news channel NDTV, the ministry, in its document, had said the Chinese aggression has been "increasing along the Line of Actual Control (LAC) and more particularly in Galwan valley since May 5."

"The Chinese side has transgressed in the areas of Kungrang Nala, Gogra and north bank of Pangong Tso Lake on May 17-18," the document, titled 'Chinese Aggression on LAC' stated.

The document revealed that "... a violent face-off incident took place between the two sides on June 15, resulting in casualties on both sides."

After the clash, a second corps commander level meeting took place on June 22 to discuss the modalities of de-escalation. "While engagement and dialogue at military and diplomatic level is continuing to arrive at mutually acceptable consensus, the present standoff is likely to be prolonged," it said.

A defence ministry spokesperson told the news channel that the document "did not go through him".

The opposition Congress, meanwhile, asked the government why the report was taken down with party leader Rahul Gandhi alleging that removal of the document from websites would not change facts.

"Forget standing up to China, India's PM lacks the courage even to name them. Denying China is in our territory and removing documents from websites won't change the facts," Gandhi tweeted.

Maharashtra remains the worst affected state with 3,10,455 cases reported until Sunday.
Meanwhile, as per the information provided by the Indian Council of Medical Research (ICMR), 1,40,47,908 samples have been tested for COVID-19 till July 19, of these 2,56,039 samples were tested yesterday.