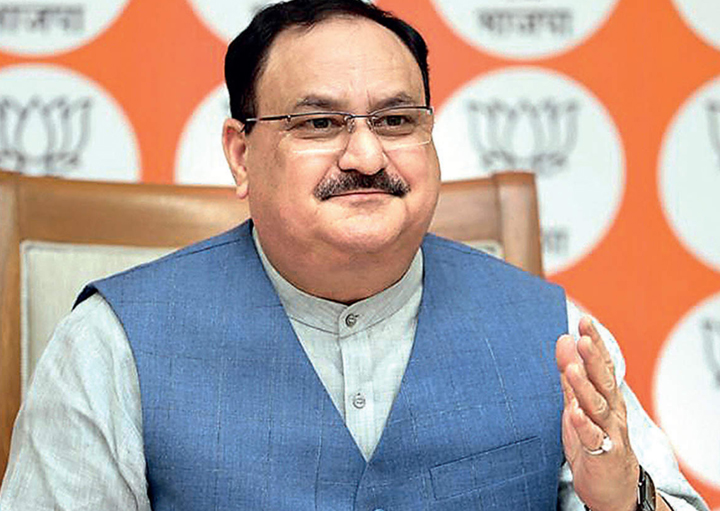 New Delhi, Sept 26: The much-anticipated Team Nadda has been declared finally. Three ex-Chief Ministers have been accommodated as Bharatiya Janata Party (BJP) vice presidents while there has been a major overhaul among national general secretaries with many significant names dropped and new faces given a chance. Many young turks with strong articulation skills have also been given a shot to prove their mettle.

B L Santosh remains national general secretary (Organisation). Among 13 national secretaries, Rahul Sinha from West Bengal has been removed. Anupam Hazra has taken his place. Other prominent names that figure in the list of 13 are Maharashtra’s Vinod Tawade, UP’s Vinod Sonkar, and Maharashtra’s Pankaja Munde, among others.

Rajesh Agarwal is the BJP treasurer. The post was once occupied by Piyush Goyal.

In spite of recent controversies, Amit Malviya continues to enjoy the party hierarchy’s trust and will continue as IT cell head.

Young turks have been given special chances in Team Nadda. Karnataka MP Tejasvi Surya is now BJP’s new Yuva Morcha head. In spite of his health issues, Anil Baluni will continue to head the media section as Sanjay Mayukh will continue to remain as his deputy. From poll-bound Bihar Syed Shahnawaz Hussain and Rajiv Pratap Rudy – both former ministers and articulate debaters – have been chosen as national spokespersons.

Guruprakash will also be a part of Bihar media. From West Bengal, Darjeeling MP Raju Biswa makes the cut. Tom Vadakkan who moved to the BJP from Congress will be BJP’s spokesman from Kerala. 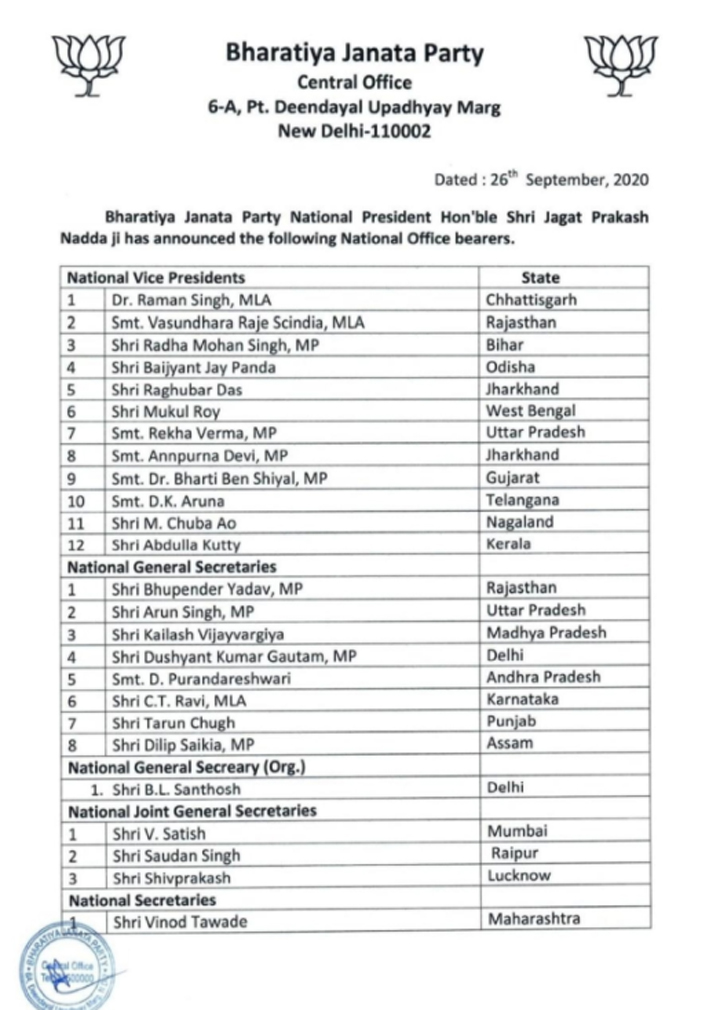 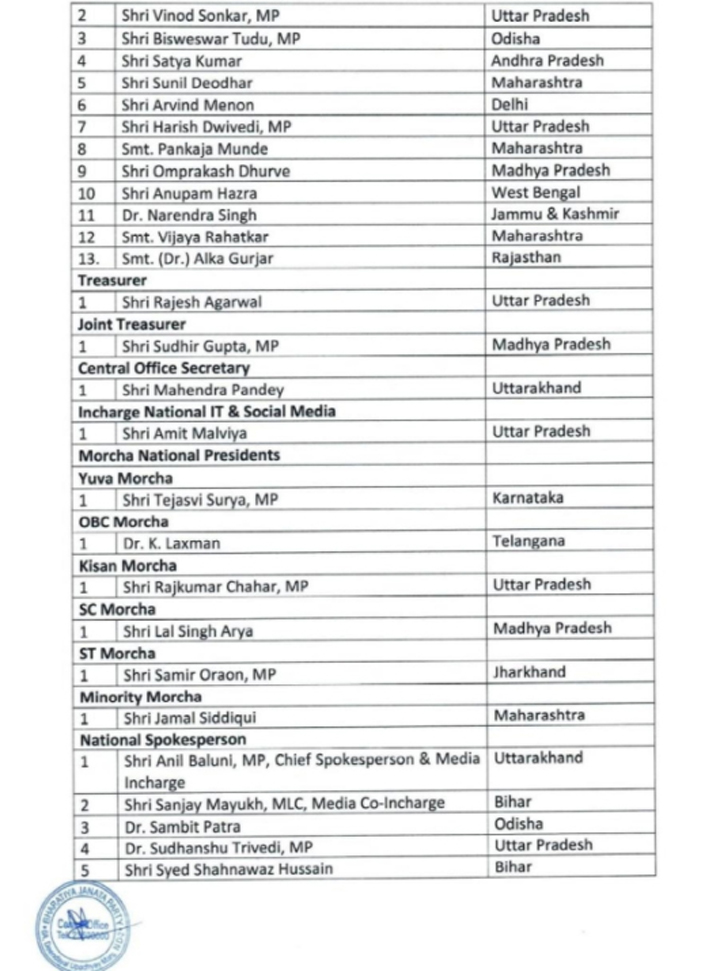 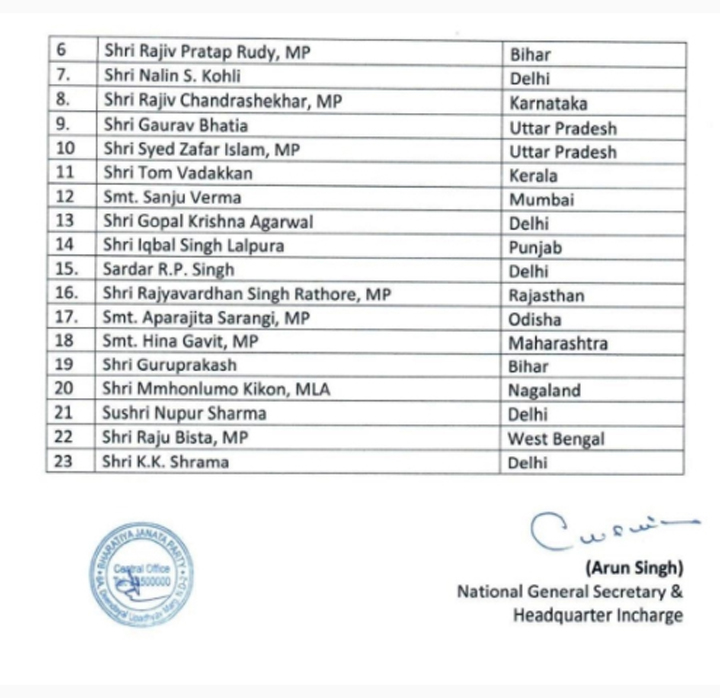 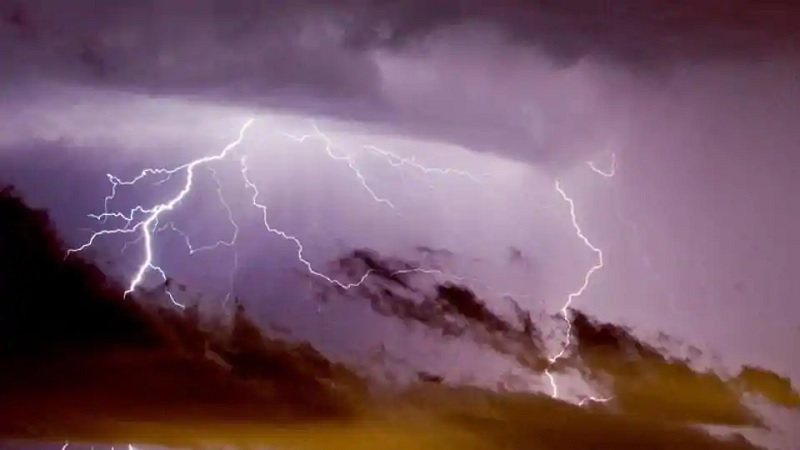 Controversy erupts after Twitter shows Jammu and Kashmir, Leh as part of China 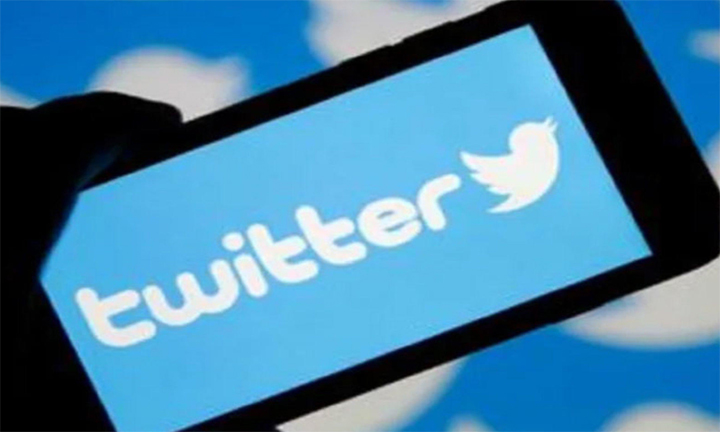 Gokhale tweeted screenshots and tagged Twitter's support handle saying that he did this on purpose as a test. Gokhale also shared a screenshot in which Leh's Kushok Bakula Rimpochee Airport was identified as a part of China by the micro-blogging platform.

The analyst later tweeted, "I believe Govt agencies have escalated the matter too. Hopefully the mistake , deliberate or otherwise, will be corrected soonest."

A user @KedarNiwasi tagged the Meity minister Ravi Shankar Prasad said, "Dear @rsprasad this is outrageous. @twitterIndia should be made accountable.

I hope it's a very silly mistake, said another Twitter user.

"@PMOIndia @AmitShahOffice sir we need to suspend @TwitterIndia in India till they time make the corrections," said Twitter user @gautam5300. 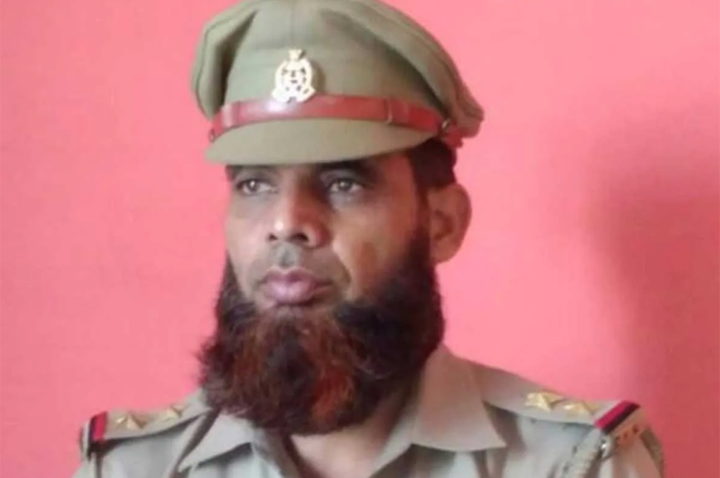 Baghpat (Uttar Pradesh), Oct 22: Sub-inspector in Uttar Pradesh Police, Intesar Ali, has been suspended and sent to the police lines, and all this for keeping a beard without permission.

Ali had been warned thrice to shave off or seek requisite permission for the same.

However, the policeman did not seek permission and continued to keep the beard.

SP Baghpat Abhishek Singh said that as per the police manual only Sikhs are allowed to keep a beard while all other policemen have to remain clean-shaven.

Ali joined the police force as sub-inspector and was posted in Baghpat since the past three years.

He told reporters that he had applied permission to keep a beard but got no response.