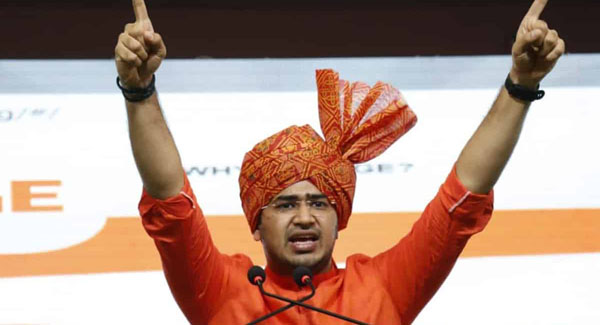 According to the police, the questioning was done nearly 10 days ago. The police had issued notice to the BJP leader under CRPC 41, responding to which Surya had said that when he returns to Delhi, the police can question him.

The police questioned Surya in his government house on the Ashoka road in the last week of June. He was also shown the CCTV footage in which the workers of the Bharatiya Janata Yuva Morcha were seen demonstrating against the chief minister outside his residence.

Notably, the police have already arrested eight workers of the organisation.

A protest was started by around 150-200 protesters of BJP Yuva Morcha on March 30, outside Kejriwal's residence, at Link road near IP College, around 11.30 am onwards to protest against his remarks on 'The Kashmir Files' in the Delhi Vidhan Sabha.

During the protest, around 1 pm, some of the protesters breached two barricades and reached outside the CM House where they created a ruckus, shouted slogans etc.

The BJP workers were also carrying a box of paint from which they threw paint outside the door. In the imbroglio, a boom barrier arm, as well as a CCTV camera, was vandalised.

The police team immediately removed the BJP workers from the spot.

After BJP workers dismantled the barricades outside Kejriwal's house Delhi deputy CM Manish Sisodia claimed that the BJP cadres attempted to kill the CM as they were unable to defeat him electorally.

Delhi deputy CM Manish Sisodia alleged that "Just because BJP cannot defeat Kejriwal, they are trying to kill him. Today's incident was a pre-orchestrated plan of the BJP to murder the CM."

He added, "Due to Aam Aadmi Party's victory and BJP's defeat in Punjab, BJP wants to murder Arvind Kejriwal. He alleged that the BJP goons were deliberately taken by the police to the residence of CM Kejriwal. They broke the CCTV cameras and barriers in front of the CM's residence and intended to kill Kejriwal."

Raghav Chadha, AAP leader said, "Since AAP has formed its govt in Punjab, BJP has gone insane. They contested against Kejriwal many times in Punjab and Delhi but got defeated. BJP has an insecurity that their business will stop; hence the BJP goons resorted to attacking the AAP convenor and this is their politics:"

He further added, "BJP attacked the house of a democratically elected CM today and this attack is not just on Kejriwal, it is on the people of this country who want sincere governance. AAP will answer back with its public service and patriotism." 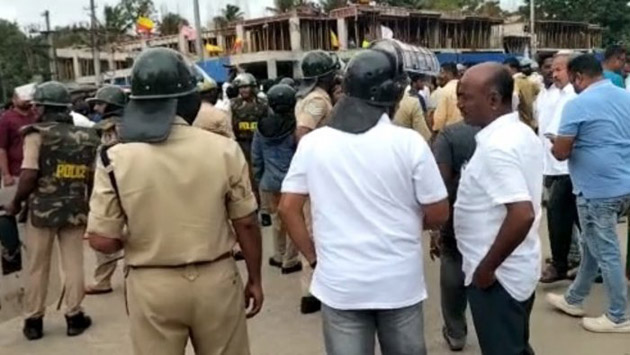 Shivamogga, Aug 16: A man, who was suspected to be involved in clashes on Independence Day in Shivamogga, was shot in his leg by the police today morning. The police claimed that he tried to attack them when they went to detain him.

Mohammed Zabi alias Charbi (30), a resident of Marnami Bailu in this district headquarters town, is recovering in a hospital after the incident.

Two men belonging to Hindu and Muslim communities - Prem Singh (aged 20) and Saddam – were hospitalized with injuries after clashes broke out between two communities in the town over putting up banners of Hindutva ideologue Vinayak Damodar Savarkar and 18th century Mysuru ruler and India’s first freedom fighter Tipu Sultan on Monday.

Soon after the clash, prohibitory orders under section 144 of the IPC were imposed in the town.

A case of attempt to murder was also registered under section 307 of the IPC against those who allegedly stabbed Prem Singh, and, in this connection, police arrested Nadeem and Abdul Rehman.

On Tuesday morning when a police team went to detain Zabi, he allegedly tried to attack police team. In self defence, sub-inspector Manjunath S Kuki of Vinoba Nagar police station shot in his right leg, police said. He was rushed to a government hospital where he is recovering.

Two people were injured on Monday as two groups clashed over displaying banners of their leaders at Amir Ahmed Circle on BH Road to mark Independence Day in the city.

Police sources said that a group of activists from Bajrang Dal and other right-wing organisations led by BJP leader Deen Dayal erected a banner of Hindutva leader Vinayak Damodar Savarkar at the circle, an area known to be communally sensitive, around 2.30 pm. The police managed to seize the banner with the help of corporation officials after a brief altercation with the group.

Meanwhile, Muslim youths gathered at the circle and insisted that they be allowed to erect a Tipu Sultan banner if Savarkar's banner is put up, superintendent of police B M Laxmi Prasad said. When the two groups started approaching the circle, the police caned and chased them away. Meanwhile, a few people were running towards the circle to hoist the tricolour. The police took away the flag and hoisted it themselves at the circle, he added.

Enraged by this, members of right-wing groups staged flash protests demanding that the authorities permit them to display Savarkar's banner. Deputy commissioner R Selvamani pacified the protesters. The police detained the agitators as a precaution and later released them.

Amid the tension, Prem Singh was stabbed in Uppar Keri area by bike-borne youths. Prem Singh, employed at a cloth outlet on Kasturba Road, was on his way home in neighbouring Gandhi Bazaar after locking the shop when he was stabbed. SP Laxmi Prasad said that the stabbing was not related to the banner incident but a random incident after the lathi charge. He also denied reports of another stabbing incident in the city.

Meanwhile, a youth, Saddam was attacked either with knife or stone and admitted to the District McGann general hospital. Hospital medical superintendent M S Sridhar said that Prem Singh and Saddam were both out of danger.

On August 13, a man was arrested for obstructing corporation officials from discharging their duty at a photo exhibition of freedom fighters at the City Centre mall on Nehru Road.

Based on a complaint by the deputy commissioner of the city corporation, the police registered an FIR against unidentified youths. Later, Mohammed Sharief, spouse of a Congress corporator, was caught and produced before a court. He has been remanded in judicial custody till August 26.

Tension had prevailed at the exhibition for a while when a group of Muslims objected to Savarkar's photo along with other freedom fighters like Gandhi and Chandrashekhar Azad. They had argued that Savarkar was not a freedom fighter and the corporation had not displayed the photo of a single Muslim freedom fighter though many Muslims had sacrificed their lives during the freedom movement.