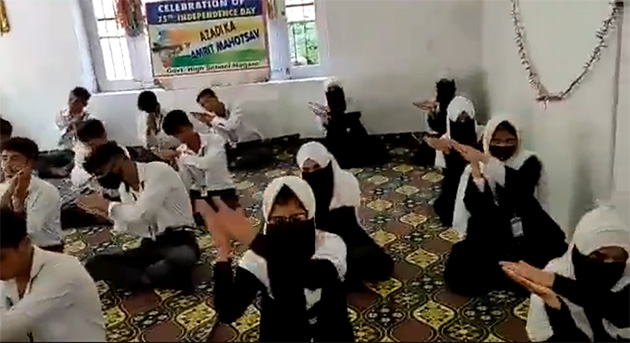 Srinagar, Sept 20: A viral video clip of Muslim students being forced to sing Hindu hymns in government-run educational institutes in has triggered a controversy in Muslim-majority Kashmir valley.

In a 1.45-minute video clip from a school in south Kashmir, students were seen singing ‘Raghupati Raghav Raja Ram’ in classes as part of the preparation for the upcoming Gandhi Jayanti.

First to react to the video was former chief minister and Peoples Democratic Party president Mehbooba Mufti, who termed the incident as the “real Hindutva agenda of the Government of India.”

“Jailing religious scholars, shutting down Jama Masjid and directing school kids here to sing Hindu hymns exposes the real Hindutva agenda of GOI (Government of India) in Kashmir. Refusing these rabid dictates invites Public Safety Act and Unlawful Activities (Prevention) Act (UAPA). It is the cost that we are paying for this so-called ‘Badalta J&K’,” she tweeted.

While sharing the video on her Twitter handle, Mufti said: “India is a democracy and every community lives with rights. The Constitution allows all communities to follow their religion. This precisely was the reason that J&K, despite being a Muslim majority, decided to be part of India and not Pakistan in 1947. Our religion too is a target now. Kashmir is being made a laboratory of a rabid Hindutva agenda.”

Muttahida Majlis-e-Ulema (MMU) Jammu and Kashmir, a representative amalgam of religious social and educational organizations, while strongly objecting to the enforcement of singing Hindu hymns in schools, said: “This matter is a cause of great concern and an attempt to undermine our religious identity.”

“Protection of our religion and Islamic identity is as Muslims our fundamental religious responsibility; and deliberate interference in this by the government, education department or any other agency will neither be accepted nor tolerated,” the MMU spokesperson said in a statement.

“It is becoming clear that there seems to be a deliberate plan to push our young generation through state-run educational institutions towards apostasy, to wean them away from Islamic beliefs and identity, to speed their so-called ‘integration’, with the Hindutva idea of India. This is a very serious matter,” it added.

However, the reaction of the National Conference, led by Omar Abdullah, over the controversy was muted. Neither Omar, not any of the senior NC leaders issued any statement on the issue.

Additional spokesperson of the NC, Imran Nabi Dar, in a tweet said, “Somewhere in South Kashmir, these children are being MADE to sing Hindu devotional songs. Have our education institutions been turned into a political tool? The video is self-explanatory.”

Thiruvananthapuram, Sept 23: A Kerala State Road Transport Corporation (KSRTC) bus was vandalised as sporadic incidents of violence were reported in various parts of Kerala as the dawn-to-dusk hartal called by radical Islamic outfit Popular Front of India (PFI) was underway in the southern state on Friday.

In Thiruvananthapuram, one auto-rickshaw and a car were damaged allegedly by people supporting the state-wise bandh.

The hartal was called by the PFI to protest against the raids in the offices and residences of its leaders and their subsequent arrests on Thursday by the NIA and other agencies for allegedly supporting terror activities in the country, a charge rubbished by the outfit as a blatant lie.

Local media reported that a petrol bomb was hurled at a vehicle which was carrying newspapers for distribution at Narayanpara in Kannur in the morning. In Alappuzha, KSRTC buses, a tanker lorry and some other vehicles got damaged in the stone pelting allegedly by those supporting the hartal call.

A 15-year-old girl and an auto-rickshaw driver suffered minor injuries in the stone pelting allegedly by PFI activists in Kozhikode and Kannur respectively. Meanwhile, Kerala police beefed up security in the state and issued directions to the district police chiefs to ensure law and order after the PFI called for a day-long state-wide hartal.

A statement issued by the police said stern action will be taken against those who violate the law. "All the policemen in the state will be deployed for the maintenance of law and order," the statement said. The PFI on Thursday had said a hartal will be observed in the state today "against the RSS-controlled fascist government's attempt to silence dissenting voices using the central agencies".

The hartal would be held from 6 am to 6 pm, A Abdul Sathar, state general secretary, PFI, had said in the statement.

On Thursday, PFI workers had taken out marches to the places where raids were carried out and raised slogans against the Centre and its investigating agencies. However, central forces were already deployed in all such places as part of strengthening security. Multi-agency teams spearheaded by the NIA had arrested 106 functionaries of the PFI on Thursday in near-simultaneous raids at 93 locations in 15 states for allegedly supporting terror activities in the country.