Mangaluru, Feb 13: A college student was killed when a bullet tanker knocked his motorbike down near Nanthoor Circle in the city today.

The deceased has been identified as Karthik Malya, a resident of Mannegudda. He was a final year degree student of Besant College in the city.

The incident took place when Karthik was from Suratkal to Mangaluru. The bullet tanker reportedly hit the two-wheeler from behind and ran over him. He died on the spot. 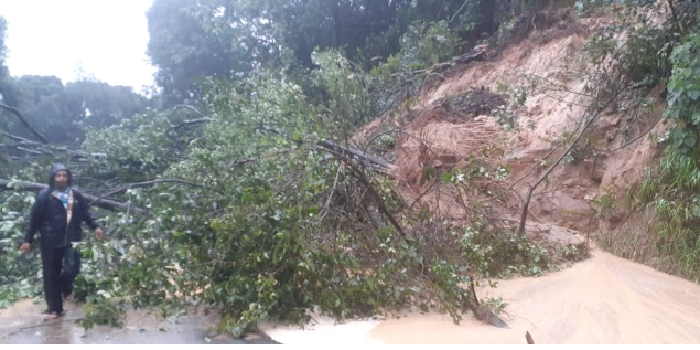 Mangaluru, Aug 7: Following the incessant rain for last few days and subsequent landslides reported at various places along Charmadi Ghat, the movement of vehicles been banned for two days.

Charmadi Ghat road connects Dakshina Kannada and Chikkamagaluru districts on National Highway-73. The fresh landslides caused cracks on the road and uprooted many trees.
Officials have closed Charmadi as well as Kottigehara check posts as a precautionary measure.

Hundreds of commuters who were stuck on various stretches of the ghat following a landslide between Maleyamaruta and Alekan falls in Chikkamagaluru district have been rescued.

A 32-year-old Dalit man was allegedly stripped and assaulted by a group of 13 youth in Karnataka's Vijayapura for reportedly touching a motorbike of an upper caste owner, police said on Monday.

"On a complaint by the Dalit victim (Kashinath Talwar), we have booked the 13 accused and investigating the incident, which occurred at Minajgi village near Talikoti on July 18," Vijayapura district Superintendent of Police Anupam Agarwal told reporters here.

"Though Talwar claimed that he touched the bike by mistake and pleaded for mercy, he said the accused severely thrashed him with sticks and footwear and took off his pants while he lay on the road haplessly," Agarwal said, citing from the victim's 2-page complaint in Kannada.

A video clip of the assault went viral on the social media and triggered outrage in the district against the upper caste accused, as the intervention by the victim's parents did not stop them from carrying the assault. Vijayapura is 524km northwest of Bengaluru.

Talwar's father Yankappa also alleged that he, his wife and their daughter were also attacked by the accused when they tried to rescue him from being brutally assaulted.

In a related development, two-three women in the village also filed a complaint with the police against Talwar for allegedly eve-teasing and 'flashing' before them.

"We have summoned Talwar to inquire about his conduct as the women alleged that he teased them, touched them inappropriately and exposed his private parts while they were washing clothes outside their houses," Agarwal said.

Here is the FIR and complaint copy pic.twitter.com/mKmJ2NC5bR