Mangaluru: Teenager drowns in swimming pool in presence of friends 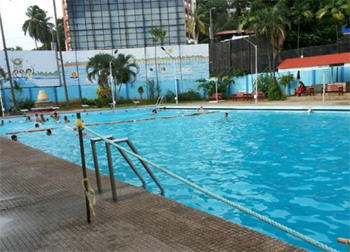 The deceased has been identified as Yajnesh, 19, a resident of Maroli on the outskirts of the city. This is the first death reported from the pool after its renovation.

According to police, Yajnesh had visited the pool along with his friends. Around 5.30pm, he was found unwell in the water after a fun dive. Though he was rushed to hospital, he was declared brought dead.

On the basis of a complaint from his father, personnel of Barke police station have registered a case of unnatural death.

This is the responsibility of Swimming Pool management to provide security to people who are not aware of swimming.   they should provide proper safety jacket to the people.   Only making money should not be their aim.  They should appoint security personnel while people use the swimming pool.