The settlers prayed in front of the mosque before clashes broke out with Palestinian Muslims, a guard at the mosque told MENA.

"Israeli authorities allow military troops, settlers and even tourists to enter Al-Aqsa, which provokes the feelings of Muslims praying in the mosque," the guard added.

A Palestinian man was shot during the clashes and transferred to a medical clinic.

An Israeli soldier removed a Palestinian woman's veil after she prevented a settler from photographing her.

Al-Aqsa Mosque is the third holiest site in Islam. Israeli violations at the site are a major source of anger for Palestinians.

An Israeli officer attacked female Palestinian students inside the mosque and desecrated a copy of the Holy Quran, Al-Aqsa Foundation for Endowment and Heritage reported on Sunday.

"One of the Israeli officers in the Al-Aqsa Mosque courtyard attacked two students from a girls' school near Buraq Mosque next to the Mughrabi Gate," foundation media chief Mahmoud Abu Atta said.

The officer tried to chase the girls away to stop them reciting the Quran. When they refused, the officer kicked and walked on the religious book, Abu Atta said.

A number of men and women gathered near the Mughrabi Gate to condemn the crime, he added.

Al-Aqsa Foundation condemned the "heinous crime" against the students, blaming the Israeli occupation forces for what might happen as a consequence. The foundation called for prompt action to defend the sanctity of Al-Aqsa Mosque. 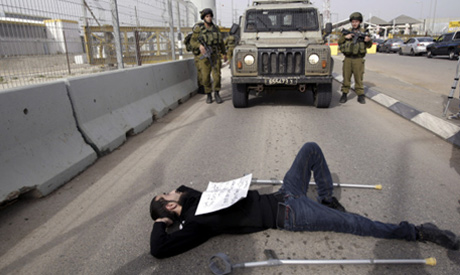 A Palestinian man lays in front of Israeli soldiers during a protest near an Israeli checkpoint in support of the Palestinian prisoners in Israeli jails north of the West Bank city of Jenin , Sunday, March 3, 2013