“It was excellent,” Al-Rabiah told Arab News when asked about the result of the March 5-8 business visit organized by the Federation of India Chambers of Commerce and Industry (FICCI). The Saudi delegation will return to the Kingdom today (Friday).

“The governments of the two countries have done their job of facilitating two-way business engagements. Our relations with India go back hundreds of years. Yet, the results in terms of business exchanges are not to the level we would like to see,” Al-Rabiah told a JBC meeting in New Delhi.

Al-Rabiah, who was leading a delegation representing sectors such as fertilizers, pharmaceuticals, housing, power, petrochemicals & refinery, steel, metals, mining and mechanical equipment, urged Indian companies to take advantage of investment and growth opportunities in the Kingdom.

Saudi Arabia is “the youngest nation in the world (67 percent Saudis are below the age of 27) which would need schools, hospitals, industries to meet their growing aspirations.” There is a lot of room for Indian companies with their high technology and experience to participate in the Kingdom’s development, he said, adding that the present $ 400 million Indian investment was insignificant compared with the potential.

Saudi Ambassador to India Saud M. Al-Sati said the two countries should engage in more business and trade by cashing in on the opportunities. He said that between 2000 and 2012, investments by Saudi companies in India were a mere $ 40 billion. This, he added, should rise significantly as Saudi and Indian companies engage with each other and build long-term business partnerships. 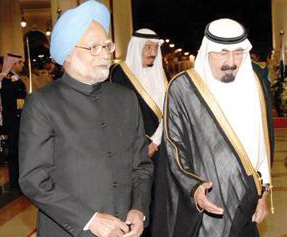 Rakesh Bakshi, senior executive committee member, FICCI & chairman & managing director of RRB Energy Ltd., said renewable energy offered tremendous scope for Indian and Saudi companies to work together as “India has the institutional framework and the technology to develop and promote renewables. We do not believe in re-inventing the wheel. Our companies have the know-how and experience to modify the wheel and suit it to your requirements in the most inhospitable of climatic conditions.”

Andhra Pradesh Chief Minister N. Kiran Kumar Reddy also met the Saudi delegation and said his government was looking for larger investments from Saudi Arabia and was keen on mutual cooperation in industrial development. “We’ll extend all incentives and facilities to Saudi industrialists.”

Abdul Qader Memon Sait, a member of the managing committee of Saudi Indian Business Network, commended the growing economic relations between the two countries. Speaking to Arab News, he spoke about the plan to woo more than $ 100 billion investment from Saudi Arabia and other Gulf countries by India.

“There are billions of riyals of deposits by Saudi individuals remaining idle in Saudi banks, which can be invested in Indian mutual funds and equity market,” Sait said, adding that Saudis would receive profits up to 20 percent for such investments.