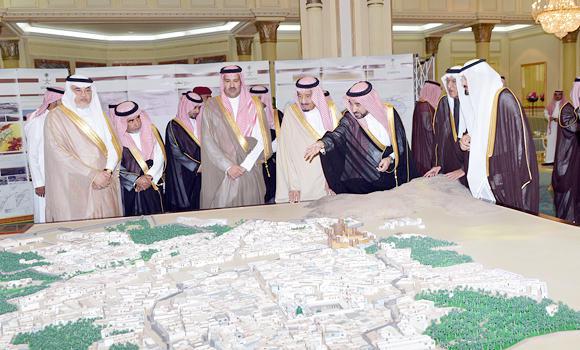 Jeddah, Mar 14: The holy city of Madinah will have a major facelift shortly as a large number of development projects are being implemented there at a cost of more than SR 100 billion.

The exhibition showcased the new expansion ordered by Custodian of the Two Holy Mosques King Abdullah for the Prophet’s Mosque, which will increase the mosque’s capacity to more than 1.6 million worshippers.

The expansion project, the largest in the mosque’s history, is estimated to cost more than SR 75 billion including SR 25 billion to be disbursed on land acquisition.

King Abdullah has approved the final plan for project and ordered that work on the expansion should start immediately in order for it to be completed in less than two years.

The projects displayed at the exhibition include a comprehensive development plan for Madinah, town planning, housing, health, educational and road projects.

Prince Salman, who was accompanied by SCTA President Prince Sultan bin Salman and Madinah Gov. Prince Faisal bin Salman, signed the plan for constructing a road in Madinah that would bear his name.

Prince Salman was in Madinah to launch festivities marking its selection as the capital of Islamic culture. Addressing the launching ceremony, Prince Salman highlighted the importance of Madinah being the city of Prophet Muhammad (peace be upon him).

The crown prince said the Saudi government is honored for having given the opportunity to serve the two holy mosques.

“The Qur’an was revealed in Arabic language. It’s both a honor and responsibility for Arabs,” he said.