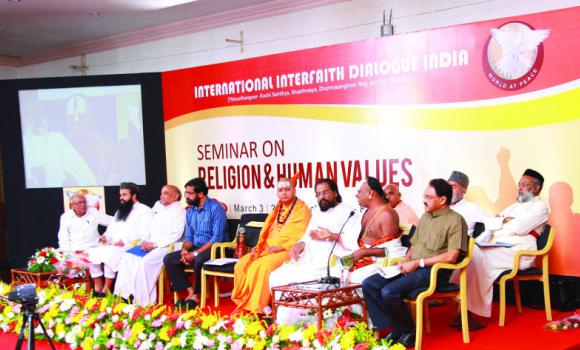 Jeddah, Mar 15: Inspired by Custodian of the Two Holy Mosques King Abdullah’s interfaith dialogue initiative, the Kochi-based International Interfaith Dialogue India (IIDI) recently organized a seminar that stressed the unity of God and the need to spread moral values promulgated by all religions.

“It was a successful seminar as it brought together leaders of different religious faiths in India and the speakers emphasized the unity of God and humanity. They aired their views openly without hurting the feelings of other faith followers,” said V.K. Abdul Aziz, a member of IIDI’s board of trustees and director of Al-Hayat International School in Jeddah.

“IIDI held this seminar inspired by King Abdullah’s interfaith dialogue initiative. We invited about 400 academics, intellectuals and religious leaders from Kerala and 200 took part. We are now in the process of holding an all-India seminar and after that we will organize an international dialogue forum,” he said.

Abdul Aziz, who recently returned from Kerala after attending the program, said the participants requested for such a seminar to be organized in all parts of the Indian state, to promote a culture of dialogue and strengthen communal harmony.

“We intend to hold an interfaith seminar shortly for youth in coordination with Oruma, an organization of professional college students in Kothamangalam. We expect the participation of at least 600 students in the program,” Abdul Aziz told Arab News.

Swami Shankaracharya Onkaranand Saraswathi, head of Prayag Peeth, who opened the seminar, said there is no meaning for religion without moral values. “The essence of religion is ignored to our own peril,” he stressed at the seminar titled “Religion and Human Values.”

The young Swami added: “An idle crowd of believers without dharma or values can never be a role model. Such assemblies, instead of influencing society in a positive way, may fall into a pseudo religious path or cult. Such cult intoxication may lead society to a blind and illogical conclusion and eventually to utter anarchy.”

K.P. Ramanunni, vice president of IIDI who presided over the seminar, called upon different faithful communities to improve their lives by upholding moral values. “The basic source of all religions is one and the same and it is divine,” said Prasanna Venkatachariar Chaturvedi Swamy, the founder of Sri Ramanuja Mission Trust in Tamil Nadu. Religion’s real mission is to strive for the restoration of justice, peace and cooperation, he said, adding that religious communities should work toward alleviating the suffering of the poor and downtrodden.

“If one’s faith is capable of identifying the sorrows of fellow beings and promotes helping the needy, pole-vaulting all the so-called religious barriers, it is the real testimony of the Oneness of the divinity. And that is how we could accomplish the sublime mission of religion. All the holy scriptures are filled with letters, words and sentences and they only become alive and powerful when the followers of the holy books are ready to translate the holy scripts into their lives without giving any room for misinterpretations. Unfortunately, however, this cardinal duty is being generally ignored by religions and this is the main cause of the present global crisis,” Swamy said.

Singer K.J. Yesudas was one of the speakers. “I am not an ambassador of any particular religion. I am the peace ambassador of IIDI and therefore I represent all religions.” He recited the famous poem of Sreenarayana Guru that calls for human unity. “Those who are reluctant to speak out for humanity as a whole are the real enemies of religion,” Yesudas said.

The recognition and acceptance of diversity is the core concept of the interfaith approach, argued Albert Nambiaparambil, secretary-general, of World Fellowship of Interreligious Councils.

“Muslims have strayed from the true spirit of Islam and that is the main reason for their failure and decadence. The quintessence of Islam is justice, love and liberation from selfish motives,” argued Jamaludeen Mankada, imam of Palayam Mosque in Thiruvanantapuram.

T. Arifali, president of Jamaat-e-Islami Hind in Kerala, called upon religious leaders to prevent the spread of communalism among their adherents. Magician Gopinath Muthukad proved the unity of religions through his mesmerizing performance, while Justice P.K. Shamsuddin, patron, welcomed the guests and explained the seminar’s dynamics.