Tehran, Mar 17: Iran launches the indigenously-manufactured Jamaran 2 destroyer in the Caspian Sea near the northern port city of Bandar Anzali in the presence of President Mahmoud Ahmadinejad.

Jamaran 2, a Wave-class warship, has been designed and built by the experts at Iran’s Defense Ministry and has state-of-the-art navigation equipment and complex defensive systems. 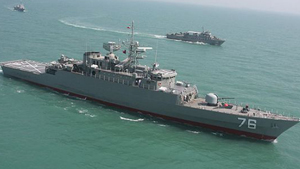 The production line of the advanced indigenous destroyer was inaugurated in Bandar Anzali six years ago with the aim of protecting Iran’s 20-percent share of the Caspian Sea.

The 1420-ton destroyer is powered by a 20000-horsepower engine with a speed of 30 knots and has the capability to carry helicopters, different surface-to-surface and surface-to-air missiles, advanced artilleries and torpedo system. It is also equipped with electronic war system.

The Jamaran 2 destroyer is a symbol of the Islamic Republic’s capability and strength and conveys the message of peace and friendship to the Caspian Sea states.

Jamaran 2 will officially join the fleet of Iran’s Navy within the next 6 months after the completion of final tests.

In recent years, Iran has made great achievements in its defense sector and attained self-sufficiency in producing essential military equipment and systems.

Tehran has repeatedly assured other countries that its military might poses no threat to other states, insisting that the Islamic Republic’s defense doctrine is entirely based on deterrence.