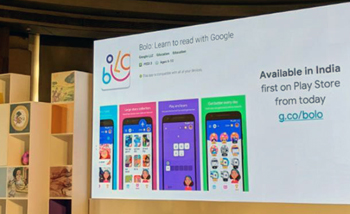 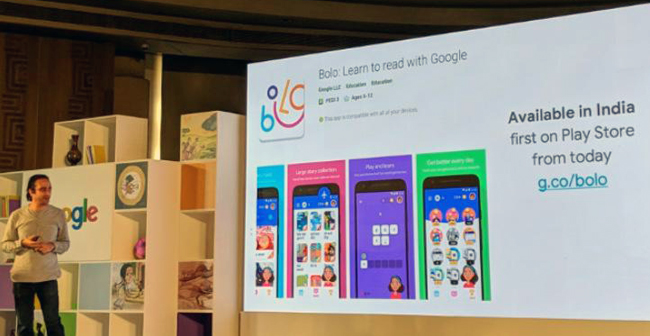 New Delhi, Mar 7: Joining the race to grab the attention of young children, Google on Wednesday launched the beta version of its "Bolo" app to help primary grade children improve Hindi and English reading skills, while ensuring that the app do not send out data on children.

"Nothing is ever sent to Google through the app," Nitin Kashyap, Product Manager, Google India, told IANS, adding the app is meant for just 10-15 minutes of daily use.

Because the app works offline, there is less chance of children getting distracted and start doing something else online, he said.

"But should children get access to the phone or not is one area where we would not like to take a position. It's a personal decision that every parent should make for their child," Kashyap said.

The Bolo app is first-of-its-kind for Google as it has not launched an app targeting primary grade children anywhere else in the world.

Google is, however, not the only company that is trying to make children familiar with the digital world.

Social media giant Facebook has "Messenger Kids", a video calling and messaging app aimed at those under 13 years of age.

While the app is available only in a few countries, over 100 child health experts last year urged Facebook to halt it, saying the "younger children are simply not ready to have social media accounts".

Facebook did not discard Messenger Kids, but it decided not to build a new app called "LOL" to let children share and post humorous meme content, according to a report in CNET last month.

Late Apple co-founder Steve Jobs never let his kids use iPads at home. "We limit how much technology our kids use at home," Jobs had told The New York Times.

Microsoft founder-turned-philanthropist Bill Gates, in an interview to the Mirror had said he set strict rules for how his three kids grew up "in a home that forbade cell phones until age 14, banned cell phone use at the dinner table, and set limits on how close to bedtime kids could use their phones".

Google, however, said it has been piloting Bolo with over 900 children in 200 villages in UP with the help of ASER Centre, a research and assessment unit of the Pratham Education Foundation.

With the app, 64 per cent of children showed an improvement in reading proficiency in just three months, it added.