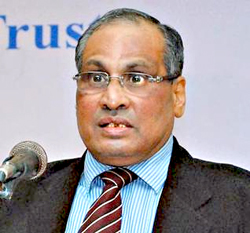 Bengaluru, Dec 16: The appointment of Justice S R Nayak as the chairman of the Karnataka Law Commission has been challenged before the Karnataka High Court.

A writ petition has been filed in this regard by H M Farooq stating that Justice Nayak's appointment as chairman was in violation of the Protection of Human Rights Act.

The State government had appointed Justice Nayak as the chairman of the Law Commission in June 2013. A person to be appointed chairman of the Law Commission shall be a person who has held the office of the Chief Justice of High Court or that of a judge of the Supreme Court. Justice Nayak was the Chief Justice of the Chhattisgarh High Court.

œIt is pertinent to note that Justice Nayak, after ceasing as chairperson of Karnataka Human Rights Commission, was once again appointed and employed by the Government of Karnataka with utter disregard for the provisions of Section 24(3) of the Protection of Human Rights Act,  the petitioner claimed.

The petitioner has prayed for quashing of the appointment of Justice Nayak as the chairman of the Law Commission.

œThe Law Commission of Karnataka is a very important body under the Government of Karnataka, which is constituted to look into the lacunae in laws and recommend abolishing obsolete laws. The

appointment is ex facie illegal, void and abuse of process of law resulting in gross failure of justice. Further, it is in utter violation of the mandatory provision stipulated under the Protection of Human Rights Act,  the petitioner submitted.

The functions of the Law Commission of Karnataka include suggesting amendment, modification in the existing laws, proposed laws, drafting new laws for effective functioning of the market economy, deletion of obsolete laws, providing assistance to the State Legislature in drafting laws, suggesting steps for administrative reforms and providing suggestions of settlement of inter-state disputes.

Victory of farmers is victory of democracy, says U T Khader

It is the victory of farmers and Opposition parties who held protests against the farm laws for the last one year.

He demanded that the central government should announce at least Rs 10 lakh to the kin of farmers who died during the protest.

“Those political parties who flayed the protesting farmers should apologise now. The victory of farmers is the victory of democracy,” he said.