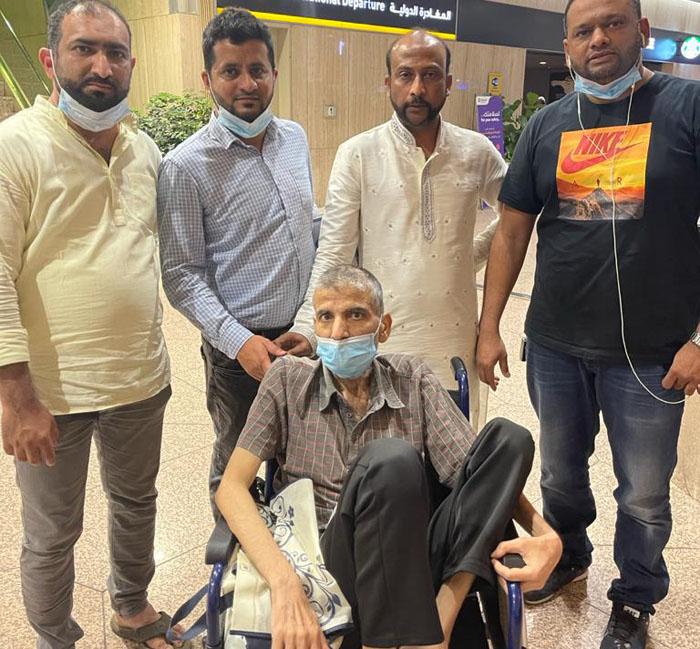 Udupi: Prabhakar Thonse, a 67-year-old man from Udupi living in Kingdom of Saudi Arabia, who was suffering from abdominal chronic disease, was sent back home with the help of Indian Social Forum Dammam team members through Vande Bharat repatriation flight.

He had been working in Saudi Arabia for the past 40 years as a tailor in Dammam SECO area. His last visit to his family was 21 years ago in 2000 and had never returned to India thereafter.

Indian Social Forum came to know about his plight when Social Democratic Party of India leaders requested to find the Indian who was seeking help through WhatsApp message claiming to be sick with no medical facility and no care taker around. Tracing through the viral message ISF Dammam team lead by Mohammad Ali Muloor and accompanied by Imran Kaatipalla and Ibrahim Krishnapura was able to locate Prabhakar on 10th June at his accommodation in a bad condition. Prabhakar was going through an abdomen chronic disease and lying in his bed with regular bleeding issues.

ISF team found that his Saudi Arabian resident ID (Iqama) was not renewed for past 4 years, no medical insurance covered, passport was missing, and however getting all these documentation done required lengthy procedure to be followed with Sponsor Company, Government offices and Indian Embassy. Prabhakar was immediately taken to local private hospital and was later shifted to King Fahad University hospital in Dammam by ISF welfare team where he had undergone colonoscopy, endoscopy, Biopsy and other treatment for more than 2 weeks. These test results seem to be chronic disease and hence doctors advised the team to send him to India for the further treatment.

Meantime, ISF team started following up with Saudi Sponsors in order to make the exit VISA process at Ministry of Interior and contacted Indian Embassy for the issuance of Confirmation letter and Emergency certificate. With no time, Indian Embassy swung into action to issue the Emergency Certificate / Temporary passport to facilitate Prabhakr’s repatriation to India. With the regular follow ups with Saudi Sponsor, Ministry of Labor and other local authorities ISF team successfully completed the repatriation procedure.

Indian Social Forum has requested local Mangaluru SDPI leaders to make arrangements for the further treatment at home town, as agreed he was received at the Bajpe International airport and later shifted in party ambulance to a local hospital whereas SDPI leaders assured his further treatment will be taken care of.

Tremendous amount of work, dedicated and selfless team effort had been put in place by ISF’s welfare team for the past 2 weeks in order to complete the repatriation process. ISF appreciated Indian Embassy for the swift response in facilitating the documentation and thanked MASA president Sathish Bajal, ISF well-wisher Joy Fernandez and Dr. Mohammad Waseem Bhatkal Dammam Health Clinic for extending generous financial support in procuring flight ticket and other needs. This incident is a classic example for Indian community’s collective team work, by this attitude devastated and stranded NRIs in Saudi Arabia can be benefited hugely, ISF said in a press statement.

Managluru, Sept 12: After months of sustained protests by local social activists, the tag 'Adani airports' has been removed from the name boards of the Mangaluru International Airport (MIA).

The original name boards, prior to the Adani group taking over the handling of operations of the airport, have now been restored, social activist Dilraj Alva, who took up the issue with the airport authorities, told reporters here on Saturday.

Alva said the Adani group had changed the name, adding 'Adani airports' to the name boards after it took over the handling operations.

However, as per the agreement for operations and maintenance of the airport, there was no provision to change the airport name, which was revealed through an RTI reply. A legal notice was served in March this year to the Airports Authority of India (AAI) and the MIA director questioning the 'Adani' tag attached to the name boards.

The legal battle waged in this regard has now yielded result and the original name board has been restored from Friday. The changes have been made in MIA's official Facebook and twitter accounts also, Alva said.

Arjun, a former sub-inspector at the Gonibeedu police station in Chikkamagalur district was arrested by the team headed by Superintendent of Police Ravi D. Channannavar on Wednesday night in Bengaluru, sources said.

The police in Gonibeedu had picked up Punith K.L. on May 10 in connection with an elopement case probed by SI Arjun. Arjun allegedly tortured Punith and asked another youth to urinate on his face. It has also been charged that Punith was asked to lick the urine on the floor.

Meanwhile, a rape case was lodged against Punith and his relatives but he had obtained bail in the case. Both the cases are being investigated by the Criminal Investigation Department (CID).

The Karnataka High Court has turned down the plea of accused sub-inspector Arjun to quash the charges against him in the case in July. He had withdrawn the application seeking quashing of the case. The court had also directed the police not to take any coercive measure and file a charge sheet in the case.

Various organisations in the state have planned a massive protest this week demanding the arrest of the accused sub-inspector.