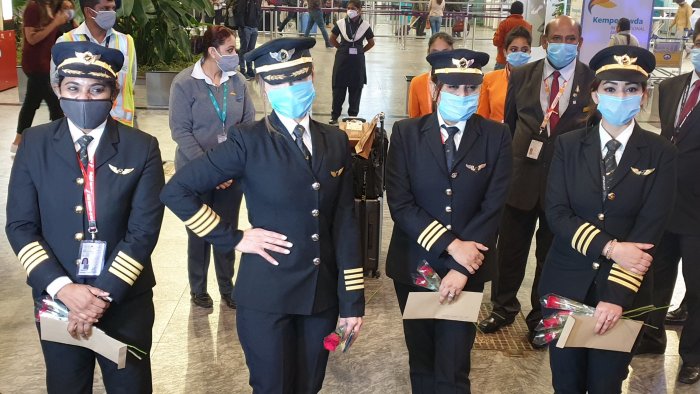 Bengaluru, Jun 11: An all-women cockpit crew operating Air India's inaugural San Francisco-Bengaluru flight arrived in Karnataka's capital after flying over the North Pole and covering a distance of about 16,000 kilometres.

The flight number AI176 left San Francisco on Saturday at 8.30 PM (local time) and arrived in Bengaluru at 3.45 AM on Monday, according to Air India sources.

Flying over the North Pole, this is also, arguably, the second-longest route in the world for a commercial flight. The landmark flight spanned a distance of 13,993 kms, linking two tech hubs located diametrically at opposite ends of the world with a time zone change of about 13.5 hours.

Commanded by Capt Zoya Aggarwal, the Boeing 777-200LR aircraft also had in the cockpit Capt Papagiri Thanmai, Capt Akansha Sonaware and Capt Shivani Manhas. Captain Zoya has a flying experience of over 8,000 hours and has over 10 years of experience commanding a B-777 aircraft.

A huge posse of mediapersons gathered at the Bengaluru Airport as the four pilots emerged out of the arrival terminal, welcomed with a huge round of applause. The beaming foursome showed no signs of any jetlag as they proudly proclaimed their arrival with a thumbs up.

“It has been a great experience. Today, we successfully completed one of the longest flights as an all-women team, a dream realised to connect the world’s two Silicon Valleys. We have turned a new chapter in aviation history,” remarked Capt Zoya.

Air India too expressed its elation when it tweeted, "Imagine this : -All Women Cockpit Crew. -Longest flight into India. -Crossing the North Pole It's here & happening! Records broken. History in the making by AI176 from @flySFO to @BLRAirport. AI 176 is cruising at 30000 feet."

IAEA, Iran thrash out 'temporary solution' ahead of deadline 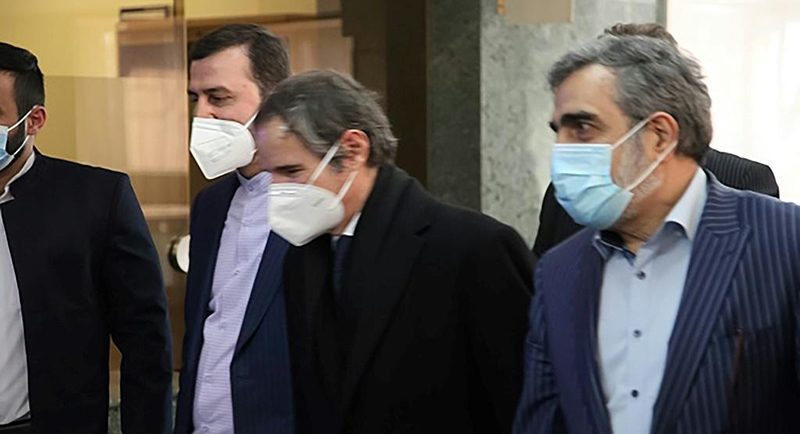 Vienna, Feb 22: The UN nuclear watchdog chief announced on Sunday a “temporary solution” to allow Iranian facility inspections to continue after days of talks with officials, giving some much needed breathing space for diplomatic negotiations.

However, Rafael Grossi admitted that under the new three-month arrangement, the International Atomic Energy Agency (IAEA) would not have the same level of access after a law comes into force on Tuesday limiting some inspections.

Grossi’s visit to Iran came amid stepped-up efforts between US President Joe Biden’s administration, European powers and Tehran to salvage the 2015 nuclear deal that has been on the brink of collapse since Donald Trump withdrew from it and went on to impose sanctions on the nation.

In December, Iran’s conservative-dominated parliament passed the law demanding a suspension of some inspections if the United States failed to lift sanctions by this Sunday.

Tehran had notified the UN body that if the suspensions were lifted it would suspend “voluntary transparency measures” — notably inspections to non-nuclear sites, including military sites suspected of nuclear-related activity.

Grossi said that under the new “temporary technical understanding... there is less access, let’s face it”.

“But still we were able to retain the necessary degree of monitoring and verification work,” he added.

“What we agreed is something that is viable — it is useful to bridge this gap that we are having now, it salvages the situation now,” Grossi told reporters after landing back in Vienna.

Under the temporary agreement Tehran will for “three months record and keep the information of some activities and monitoring equipment”, Iran’s Atomic Energy Organization (IAEO) said.

“During this period, the IAEA will not have access to this information,” the statement said, appearing to confirm comments from Foreign Minister Mohammad Javad Zarif that the law mandates the government to “not provide the tapes” of cameras at sites to the IAEA.

“If the sanctions are completely lifted within three months, Iran will provide this information to the IAEA, otherwise the information will be deleted forever,” the statement added.

Zarif had signalled the Islamic republic wanted to avoid an “impasse” over inspections, but also warned it could further step away from its commitments if Washington does not lift sanctions.

Grossi had said earlier his hope in visiting Tehran was “to stabilise a situation which was very unstable”.

“I think this technical understanding does it so that other political discussions at other levels can take place, and most importantly we can avoid a situation in which we would have been, in practical terms, flying blind,” he added.

Iran’s deputy foreign minister Abbas Araghchi acknowledged on Saturday that his country’s inspection capability would be “reduced by about 20-30 percent” when Tuesday’s law came into effect.

Grossi declined to give his own estimate of how much the IAEA’s inspection capability would be reduced but said the number of inspectors would not be scaled down, and that the agency would still be able to carry out some snap probes.

Biden has committed to rejoining talks on Tehran’s nuclear programme in a shift from Trump’s policy of “maximum pressure” towards the Islamic republic.

Tehran has repeatedly said it is ready to return to its nuclear commitments, on the condition Washington makes the first move by lifting the sanctions that have heaped economic pain on Iran.

But foreign minister Zarif warned that, if sanctions were not lifted, his nation would continue scaling back its commitments under the 2015 deal with the five UN Security Council permanent members and Germany.

The stockpile of “enriched uranium will increase”, he said, stressing that Tehran had the right within the agreement to stop observing commitments “totally or partially” if the other parties fail to honour theirs.

“We are still in the partial phase,” Zarif said. “We can be total.”

Araghchi said Saturday that Tehran was reviewing the proposal, and discussing it with “friends and allies” China and Russia.

Meanwhile Recep Tayyip Erdogan, president of neighbouring Turkey, said on Sunday there was a “window of opportunity” for the lifting of Iran sanctions, calling it “legal and logical”. Patna, Feb 20: A day after the Bihar School Examination Board (BSEB) cancelled the social science paper for Class 10, over 500 students went on rampage on Saturday morning in Patna's Boring Road area vandalising government and private properties leading to baton charging by police.

The angry students broke windshields of several cars near AN College. They pelted stones in college premises. When police of the concerned Sri Krishnapuri police station reached the spot, the agitated students also pelted stones at them.

Since the students were in large numbers, police intimated the headquartres and more deployments from other nearby police stations were used. Mild baton charge was used to disperse the students.

The paper of social science was leaked in Jhajha and Jamui and circulated at several places through WhatsApp, leading the BSEB decision.

According to the BSEB, officials of State Bank of India of Jhajha and Jamui were involved in the paper leak. Three officials are currently under scanner of the police of respective district.

A reexamination is scheduled on March 8. 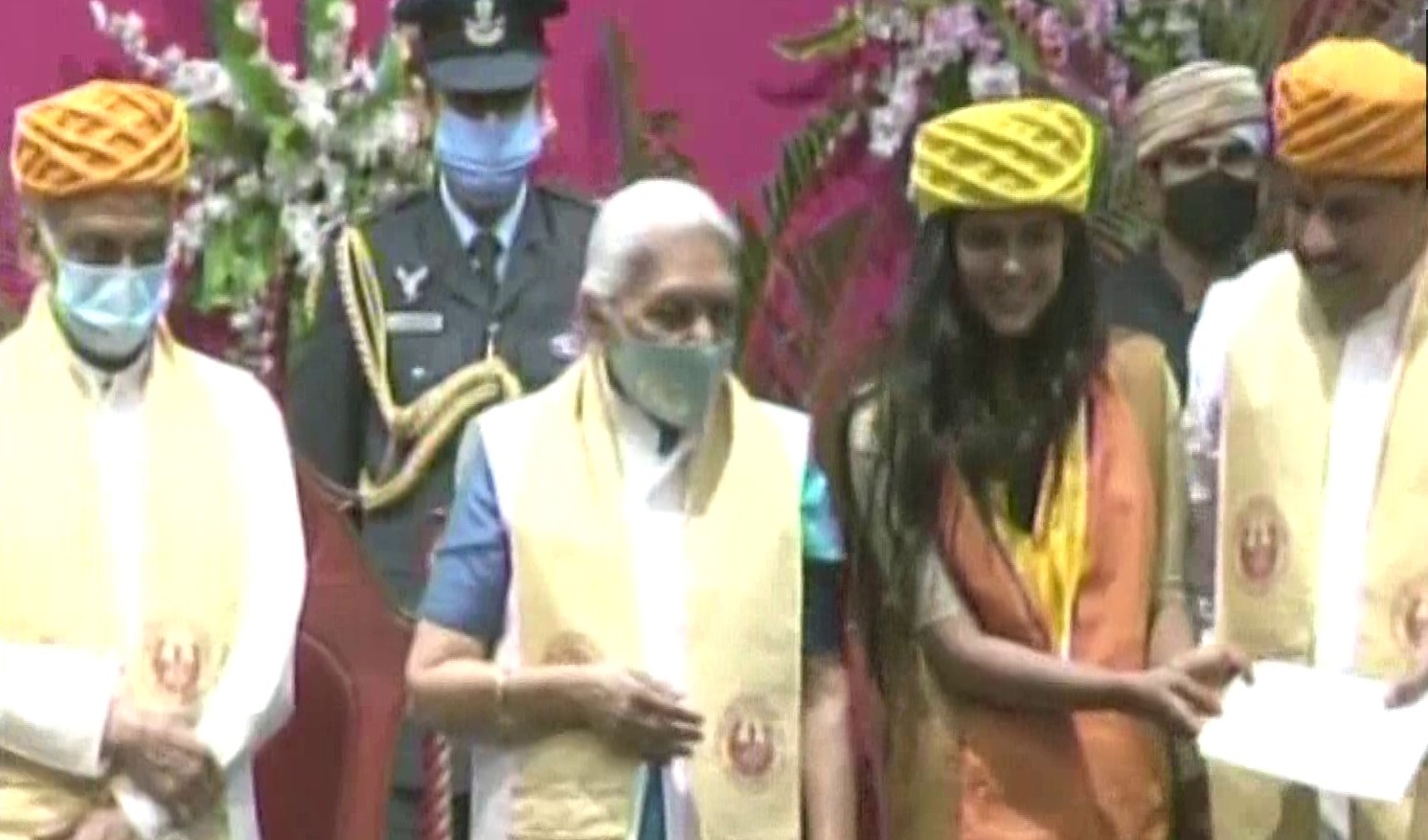 Indore, Feb 20: Ujjain-based doctor Krati Jain became the first woman in Madhya Pradesh to be felicitated with 13 gold medals and one silver medal for topping in medical studies.

She had received eight gold medals and one silver medal from Governor Anandiben Patel at her convocation ceremony at Devi Ahilya Vishwavidyalaya on Friday.

Dr Krati, who hails from the Ujjain district, had completed her MBBS in 2018 from Mahatma Gandhi Memorial College, which is among the three collages that come under Devi Ahilya Vishwavidyalaya, Indore. She had topped in all three colleges.

Speaking to ANI, Dr Krati said: "Today I am very happy to receive these eight gold medals and one silver medal for becoming an overall MBBS topper of the university and all subject topper in the final year. I received five gold medals earlier in every year of the course."

"MBBS is a tough course but I had the support of my parents and the guidance of my teachers. On top of that medical was my primary interest that is why I was able to focus more. I have completed my graduation degree in 2018 and I am now pursuing a Master's degree in Radiology," she said.

Advising the students who could not focus on the studies, Dr Krati said that studying your favourite subject more can reduce stress and boredom.

"The more time you spend studying your favourite subject, the more you will be interested and you will be able to understand the subject in a better way," she added.