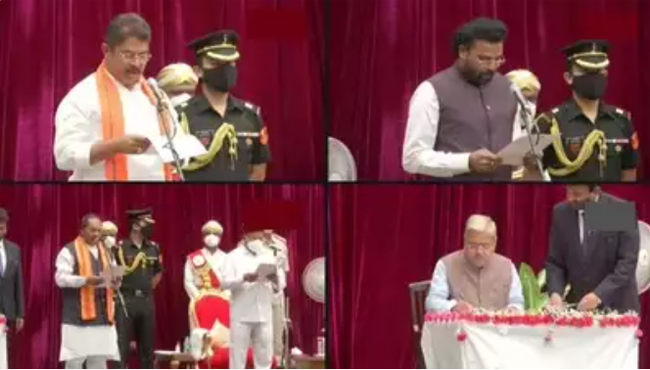 Among the big names that took oath are Murugesh Nirani, B C Patil and Dr C N Ashwath Narayan. Bommai will not have any deputies unlike his predecessor B S Yediyurappa.

The new Cabinet is a mix of experienced legislators and young faces, as Bommai had said earlier.

Among the 29, eight are from the Lingayat community, seven Vokkaligas, seven OBCs, three SCs, one ST, one from Reddy community and one woman.

Karnataka: Schools reopen for class 1 to 5 adhering to covid guidelines

Bengaluru, Oct 25: Schools in Karnataka re-opened for students of classes 1 to 5 from Monday, strictly adhering to Covid-19 related precautions and guidelines. However, several private schools in the city and in different places across the state, have decided to reopen schools for these students only after Deepavali, official sources said.

Several schools had made special arrangements by decorating premises and classrooms to welcome students. "I'm happy to come back to school. I had missed meeting friends, as I could rarely come out of home and there was no school. All these days I used to see teachers teaching on mobile or laptop, now I can see directly," a student of class 4 said with joy.

A teacher said the school has made all the necessary arrangements by following the SOPs issued by the government, and felt happy welcoming children back. With Covid-19 cases declining, Karnataka government in consultation with Covid-19 Technical Advisory Committee (TAC) on October 18 had decided to permit re-opening of schools for students of classes 1 to 5 from October 25, by strictly adhering to Covid-19 appropriate behaviour and SOPs issued by the Department of Primary and Secondary Education.

Parental consent letter for physical classes is mandatory. The government has laid down certain rules such as screening for Covid-19 symptoms on entry, 50 per cent of the capacity in a classroom, provision of hand sanitizers, physical distancing of a minimum of one meter as practically feasible, no crowding, particularly at school entry and exit, and disinfecting classrooms and restrooms daily using 1 per cent sodium hypochlorite solution.

Only teachers and staff who have been vaccinated with two doses of Covid-19 vaccines would be allowed in classes 1 to 5, it had said, there shall be additional use of face shield by teachers who are over 50 years of age.

The fast bowler has been subjected to abuse on social media after the Indian team lost against Pakistan by 10 wickets on Sunday.

The match finished in the 18th over bowled by Shami as Pakistan chased down a target of 152 runs with relative ease at the Dubai International Stadium.

On Monday afternoon, Sehwag tweeted, “The online attack on Mohammad Shami is shocking and we stand by him. He is a champion and Anyone who wears the India cap has India in their hearts far more than any online mob. With you Shami. Agle match mein dikado jalwa.”

Earlier on Monday, Sehwag also tweeted his displeasure about crackers being burst after the India-Pakistan game.

Sehwag though also congratulated the Pakistan team for their win against India soon after the game on Sunday.

While India wait a week to play New Zealand next Pakistan take on the Kiwis on Tuesday.

The Indian cricket team also took the knee ahead of the match, a gesture against racism. However, there has been no official comment from the team as of Monday afternoon about the abuse directed at Shami.