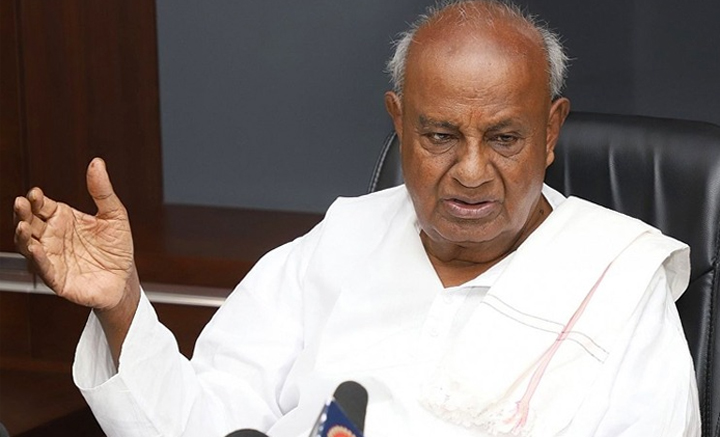 Bengaluru, Dec 5: Lauding the Union government's efforts to get the Covid vaccine rolled out early, former Prime Minister and Janata Dal-Secular (JD-S) supremo H.D. Deve Gowda on Friday said the vaccine should be given for free to the poor and at affordable rates to the majority of the people.

"The Covid vaccine should be given for free to the poor, who are economically weak and its cost should be made affordable for the majority of the people across the country," Deve Gowda said in a statement.

Gowda, 87, who also participated in the all-party meeting vaccine distribution held by Prime Minister Narendra Modi earlier in the day through video conference, said the Central government should bear the cost of the vaccination programme across the country.

"I am glad to know that the Prime Minister had recently reviewed the advances made by some drug firms in getting the Covid vaccine ready soon. The stock-taking was essential to give hope and confidence to the people who have been trapped for months by the pandemic," asserted Gowda.

Modi on November 28 visited Zydus Cadila in Ahmedabad, Bharat Biotech in Hyderabad and Serum Institute of India in Pune to take stock of vaccine development.

Deve Gowda, who was the country's Prime Minster in 1996-97, got elected to the Rajya Sabha from Karnataka in June.

Noting that the transportation and storage of the vaccine would pose a major challenge to the stakeholders, Deve Gowda suggested the formation of a high-level team to coordinate the timely delivery of the vaccine to the people across the country.

"The coming weeks should be treated with great care to ensure Covid cases do not spiral out of control and put the healthcare system under stress. Hopes of a vaccine cannot be a basis to throw caution to the wind," he said.

Deve Gowda also suggested that the high-level team should directly report to the Prime Minister's Office and create a network of medical volunteers right from the panchayat level, which is the basic governance unit in the country.

The JD-S supremo suggested that the Union government should rope in the IITs in converting any room into a cold storage with an assembly unit to store the Covid vaccine for long term, as its distribution and administration will take months.

Gowda also wanted to know if the government would buy the vaccine from other countries due to capacity constraints in making the drug in huge quantity for inoculating over 100 billion people across the country.

"Should we allow Phase 3 vaccine trials more time to assess its efficacy and safety? How many people are we going to vaccinate in the first round," Gowda had asked the Prime Minister during the interaction earlier in the day.

Mangaluru, Jan 11: Amid fears of bird flu spread in neighbouring Kerala, seven crows were found dead at different places in Mangaluru on Monday.

Three crows were found on the road near Pacchanady dumping yard, two near Shaktinagar housing colony and two more near the Kuppepadavu school road, sources in the state health department said. Health officials have visited the spots and collected samples.

It may be recalled that six crows were found dead in Manjanady near here recently and samples collected from them had tested negative for bird flu.

Health Minister K. Sudhakar had stated a couple of days back that there were no cases of bird flu in Karnataka and all the samples tested so far have returned negative.

He had also directed the health officials in the border districts to be vigilant in the wake of an avian flu outbreak in other states, including Maharashtra and Madhya Pradesh.

Four districts in southern Karnataka bordering Kerala have been put on alert following the outbreak of bird flu (H5N8) in the neigbouring state.

"We have put four districts bordering Kerala -- Chamarajanagar, Dakshin Kannada, Kodagu and Mysuru -- on alert and taken steps to prevent bird flu spread from the adjacent state though no case of the disease has been reported in Karnataka so far," a state animal husbandry department official had told IANS on January 7.

The animal husbandry department has also set up kiosks at border check-posts to monitor vehicles from Kerala to ensure chicken and eggs are not allowed to enter the districts without certification.

The Union Ministry of Animal Husbandry, Fisheries and Dairies on Monday said that avian influenza has been confirmed in 10 states of the country till date. The 10 states are -- Rajasthan, Gujarat, Uttarakhand, Delhi, Maharashtra, Kerala, Himachal Pradesh, Madhya Pradesh, Haryana and Uttar Pradesh.

Avian influenza or bird flu is a contagious viral disease caused by influenza type A viruses, which affect poultry birds like chickens and turkeys.

Madikeri, Jan 3: India's coffee exports has witnessed a sharp fall by 12 per cent-- 3.06 lakh tonnes in 2020 (till December ) following decline in demand across European markets that were shut down due to Lockdown following spread of Covid-19 pandemic.

According to data available with the Coffee Board, export earnings were lower by 9.9 percent to USDollar 708 million as against USDollar 786 million earned in the previous year. In rupee terms, exporters earned Rs 5,249 crore compared to Rs 5,527 crore in the previous year, a marginal decline of 5 per cent year-on-year.

Official sources in the Coffee Board in Chikkamagaluru told uni that the unit value realisation stood at Rs 1,71,517 per ton during the year as against Rs 1,59,260 per ton in 2019, a rise of 7.7 per cent year-on-year.

Decline in exports was more or less in line with expectations. At the beginning of the year, it was projected around 10 per cent drop in exports as adverse weather conditions caused a decline in production over the last two years,” Ramesh Rajah, President, Coffee Exporters Association of India, said and added that the Natural calamity during the last three year claimed several lives besides the coffee growers in Kodagu district had incurred a huge loss.

On the other hand the coffee growers facing acute shortage of labourers, many growers have outsourced the entire coffee estate after being unable to manage the situation, since, Covid-19 migrant labourers were left their native places.

Meanwhile Coffee planters across growing regions of Kodagu, Chikmagalur and Hassan are staring at a loss of production this season due to off-season rains in November and December causing a delay in the harvesting of the crop.

The planters are also facing an acute shortage of labour to pluck beans as nearly 50 percent of the workers that come from north-eastern states have not returned yet due to spread of coronavirus pandemic. As a result, the growers are staring at a reduction in the production of Arabica parchment (premium washed coffee) and lower realisations. Early ripening of Robusta crops has also added to the woes as there are not enough workers to be deployed for the harvesting operations.

Off-season rains in November and December have not only led to delay in harvest. Usually, the coffee crop needs two to three months of dry period post-monsoon or else it will lead to the splitting of beans.

It will also lead to a decline in parchment production and output of cherries will go up, which fetches far less value than parchment,” Bose Mandanna, a grower from Kodagu and former Coffee Board Vice Chairman said.
Currently, prices of Arabica parchment are ruling at Rs 10,500 per bag, while cherries fetch Rs 4,000 per bag at the farm gate level.

The growers are also facing problems with the drying of beans due to lack of sunlight. The drying process is taking an unusual 10-12 days this year as against 5-6 days, thereby resulting in a further delay in dispatching the stocks to cure centres, ther shipments were delayed partly due to lockdowns across European markets. About 2-3 per cent drop in exports could be attributed to drop in demand following lockdowns across many markets, he said. 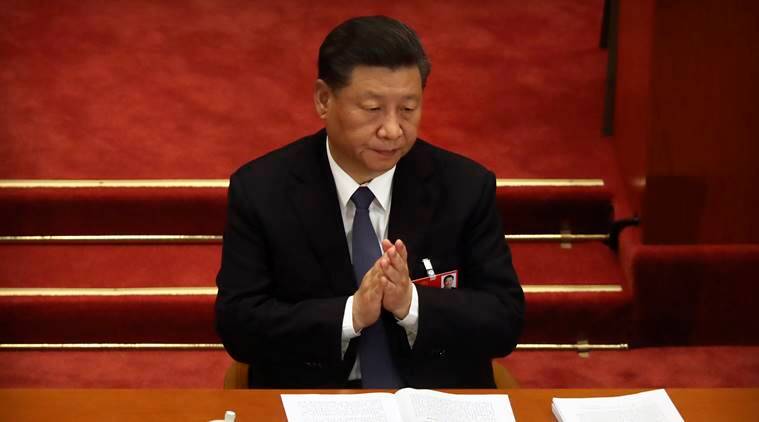 Beijing, Jan 5: Chinese president, Xi Jinping on Monday ordered his country's army to be ready to 'act at any second', stressing on 'full-time combat readiness'.

He urged the armed forces to enhance training in real combat conditions to ensure readiness at all times, reported Xinhua.

"People's Liberation Army (PLA) must be ready to 'act at any second' and should remain on 'full-time combat readiness'," Xi stressed while adding, "Frontline frictions must be used to polish troop capabilities and training exercises need to incorporate technology."

In his first order of the Central Military Commission (CMC) in 2021 signed by Xi, he stressed strengthening military training in real combat conditions and the ability to win, reported Xinhua.

The PLA, as the military force of the Communist Party of China, must 'resolutely implement' the orders from the CMC and CPC, to mark the 100th anniversary of the party's founding on July 1 with 'excellent performances', he said.

He also suggested a 'substantial increase' in the use of technology in its exercises and to keep up with the latest developments in military and hi-tech knowledge.

These included the use of computer simulations and online combat in drills, as well as the exploration of more opportunities to add hi-tech and the internet - known as tech+ and web+ - in training, reported South China Morning Post (SCMP).

"[The PLA must] increase the integration of new equipment, new forces and new combat realms into training and combat systems," he said.

Since taking over as president and head of the CMC in late 2012, Xi has consistently pushed the PLA to be prepared for war. He also initiated a massive overhaul of the PLA in 2015 to modernise the Chinese military, planned for completion in 2020, reported SCMP.

In order to checkmate the US in South China Sea PLA also stepped up exercises and air force fly-by operations targeting Taiwan during 2020.