Mangaluru, Aug 1: A 30-year-old man was arrested on charge of sexually assaulting college student after chasing away her male friend at NITK beach in Surathkal on the outskirts of the city.

The accused has been identified as Munaz, a fish lorry driver by profession.

The incident took place on July 27 when the girl, studying in a college in city had been to the beach with her classmate.

The accused allegedly captured the duo’s movements in his mobile and started blackmailing them that he would leak the video.

According to the victim, he also threatened the boy and forced him to leave the place and then sexually assaulted her.

A complaint was lodged with the women's police station and the accused Munaz arrested under Section 376 of IPC. 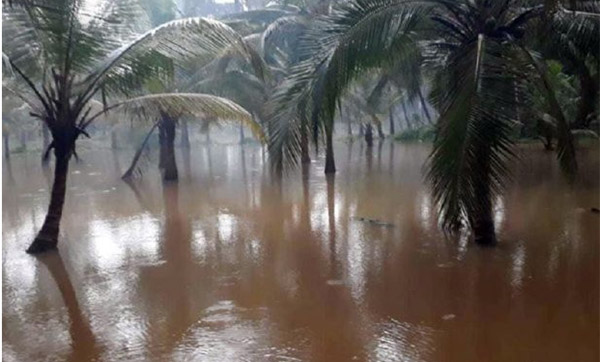 Mangaluru/Udupi, Aug 3: A red alert has been declared in twin coastal districts of Dakshina Kannada and Udupi after the Indian Metalogical Department (IMD) predicted extremely heavy rain, an official in the know of the development said on Wednesday.

As per the IMD predictions, on July 3, 4 and 5, there is likely to be heavy to very heavy rain ranging at isolated places in these coastal districts.

Meanwhile, over 300 volunteers have been trained under the ‘Aapda Mitra’ scheme to serve the people in distress during floods, rainfall and natural calamities in the twin districts. However, the government has so far not provided any rescue kits or gear or equipment to these volunteers.

Volunteers are entitled to get kits worth Rs 10,000 comprising a raincoat, torch, first-aid box, lifejacket and a rope to help them handle emergencies and take part in rescue operations in dangerous locations.

Without the required equipment or gear being made available, volunteers would find it difficult to perform timely duties and help rescue those in distress.

Meanwhile, heavy rain of around 403 mm in five hours, between the Murdeshwar-Bhatkal section in Karwar region, under Konkan Railway, has resulted in disruption of train services.

According to Konkan Railway authorities, waterlogging and soil slippage has occurred, resulting in disruption of train services in this region. Restoration work is under progress, and efforts are being made to restore services at the earliest.

Due to the above situation, trains on the Konkan Railway route have been regulated and short terminated, and one train was cancelled. The services were restored at 3 pm.