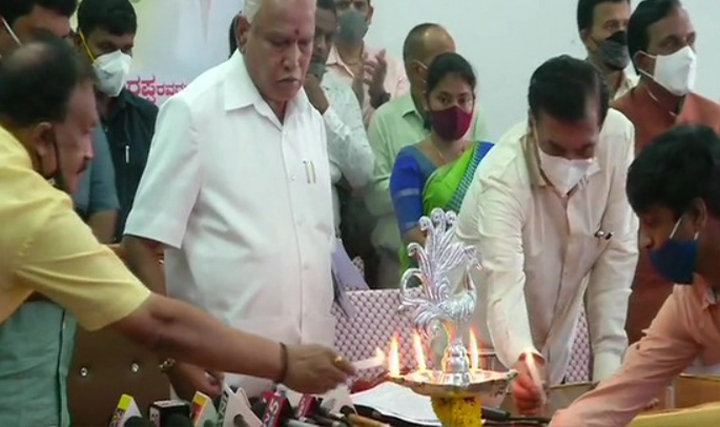 The inauguration ceremony was held via video conferencing.

Bangarappa was elected to the legislative assembly from Soraba constituency for six consecutive terms between 1967 and 1996. He served as the twelfth CM of Karnataka from October 1990 to 1992.

During the inauguration, Yediyurappa recalled the contribution made by former Cheif Minister Bangarappa in the development of Karnataka.

"The Chief Minister BS Yediyurappa inaugurated the 87th Commemoration Programme of the late Chief Minister S Bangarappa and the new park in the Soraba town panchayat area through virtual media. MP BY Raghavendra, Member of the Vidhan Sabha, Ayanoor Manjunath and others were present," Karnataka CMO tweeted. 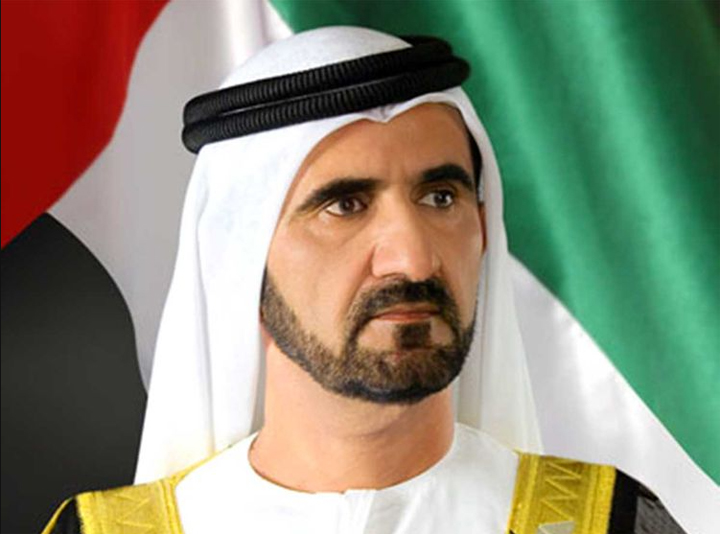 Dubai, Nov 26: His Highness Sheikh Mohammed bin Rashid Al Maktoum, Vice-President and Prime Minister of the UAE and Ruler of Dubai, has pardoned 472 prisoners on the occasion of the 49th UAE National Day.

Earlier this week, the UAE President, His Highness Sheikh Khalifa bin Zayed Al Nahyan, had ordered the release of 628 prisoners. 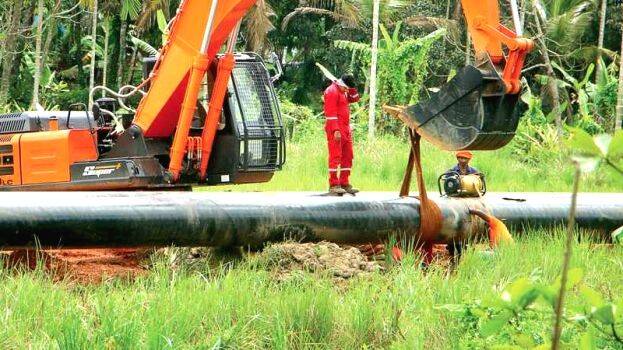 Kochi, Nov 18: With the completion of the 540 metre stretch across Chandragiri River in North Kerala, the Gas Authority of India is ready for commissioning its much-delayed Kochi-Mangaluru natural gas pipeline.

The Chief Minister also thanked Prime Minister Narendra Modi for clearing the obstacles for the project, as the state would garner a revenue ₹1,000 crore by way of taxes in a year.

The civil works in the final stretch were hindered for a few months, forcing the authorities to reduce the diameter of the pipeline across the river from 24 inch to six inches to complete the project. With this, the pipeline will start supplying gas from the Petronet LNG Terminal in Kochi to various districts shortly.

The industry sources said that the civil works for the construction of the pipeline were awarded in 2016 with a deadline for completion in December 2018 at an estimated cost of ₹2,915 crore. The project was to be commissioned in 2019. But the deadline was extended to March and later to May 2019 following Kerala floods. The public protest against laying of pipelines also delayed the completion of the work, resulting in doubling the project cost.

“For Kerala, this is a major achievement in the infrastructural sector as gas availability will certainly be ushering a fresh round of industrialization in the State”, M.P.Sukumaran Nair, Director, Centre for Green Technology and Management, Kochi.

The ₹4,500 crore Petronet LNG Terminal was commissioned in 2014. Since then the long wait was for the construction of gas carrying pipeline which was delayed on account of several hurdles-regional, political, natural calamities and technical. The LDF government which came to power in 2016, took up the completion of the project on a fast track with constant monitoring and addressing issues instantly as and when they crop up. Those who extended a ‘right of way’ for the installation of the pipelines were also given a better deal with regard to compensation, Nair said.

He pointed out that a similar project planned at the same time with an installed capacity of 5 million metric tons per annum at Dahej was completed in 2003 and has undergone capacity enhancement to 17.5 MMTPA by 2019, immensely contributed to the industrial prosperity of that state.

The central government proposes to transform the primary energy consumption in the country predominantly towards natural gas, which will become a household fuel and also the prime energy source for the manufacturing sector in the coming decade. Being a fuel of the century and even on account of its lower cost and environmental friendliness, he said Kerala community would accept the same especially on account of its availability, safety being comfortable and price acceptable.

India working towards return of workers to UAE post-COVID 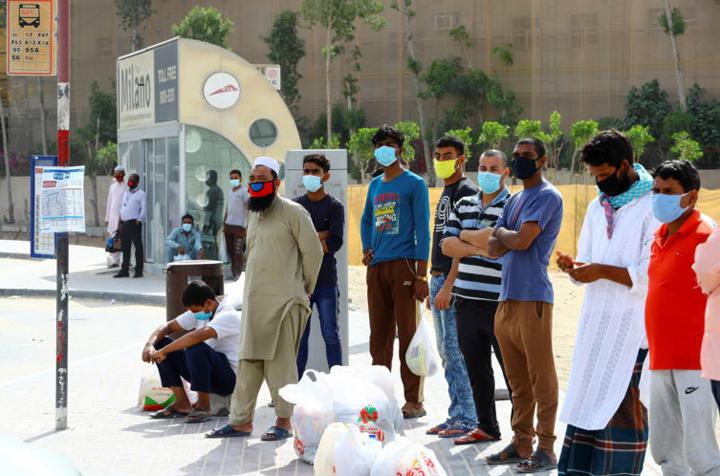 New Delhi, Dec 1: The Government of India is actively working towards the return of its workers back to the United Arab Emirates (UAE) and Bahrain who had lost their jobs and had to be evacuated to India during the Covid pandemic earlier this year, sources told ANI.

Thousands of Indians had to leave the UAE as businesses closed and employees were placed on unpaid leave.

According to the Consulate General of India in Dubai in August, more than five lakh Indians had been registered for repatriation to India from Abu Dhabi, Dubai, Sharjah, Ajman, Umm Al-Quwain, Fujairah and Ras Al Khaimah since the beginning of the Vande Bharat Mission- a mega exercise to repatriate stranded Indians back to their country.

However, reflecting the close relationship between India and the UAE, the Government there took exceptional measures to take care of the community through a series of supportive initiatives. In this regard, they were assisted by the Embassy and Consulate, who worked in coordination with Indian community organisations. Similar steps were taken in Bahrain and other Gulf kingdoms. This was acknowledged by Prime Minister Narendra Modi at the August 15 address from Red Fort.

On its part, even at the peak of the Covid-19 crisis, India continued to provide essential goods to the UAE, including during the Ramzan period. It allowed special flights for that purpose. It also facilitated doctors and nurses to return to the UAE as a special gesture, as also to some Gulf countries.

The warm relationship between India and the UAE was recently on display when the Indian cricket board moved the prestigious Indian Premier League to the UAE as conditions were not conducive in India to hold the mega event.

Last week, External Affairs Minister Dr S Jaishankar was in the UAE to discuss the advancement of strategic cooperation between India and the UAE as coronavirus crisis seems to ebb away with the imminent roll-out of Covid vaccine. Earlier he visited Bahrain on a similar mission.

"Thank HH @MohamedBinZayed for receiving me on arrival at Abu Dhabi. Conveyed the greetings and good wishes of PM @narendramodi. UAE's care and consideration of its large Indian community is deeply appreciated," Jaishankar tweeted, adding that he "Discussed advancing our strategic cooperation in the post-COVID era. Exchanged views on important regional and international issues."

Sources said that the objectives of EAM's mission were to facilitate the early return of Indians who came back from the Gulf, retention of those already there, build on India's reputation of reliability to increase trade and take the strategic cooperation to a higher level. This was trade and Diaspora diplomacy at its best, sources added.

Jaishankar, during his visit, also made it a point to meet the Dubai Government. On Sunday, he called on Mohammed bin Rashid Al Maktoum, Ruler of Dubai and handed over a personal communication from Prime Minister Narendra Modi.

The EAM's tweets spelt out the nature of these discussions.

"Called on HH Sheikh Mohammed bin Rashid Al Maktoum, VP and PM of the UAE and the Ruler of Dubai. Handed over a personal communication from Prime Minister @narendramodi. Thanked him for taking care of the Indian community," he tweeted.

"Underlined that India had been a reliable partner in all respects during this difficult period. Discussed prospects for our economic cooperation in the post-COVID era," said the EAM in another tweet.

Sources conveyed the sentiment about India in the Gulf has strengthened as a result of the COVID crisis. India's willingness to go the extra mile to keep trade going is widely appreciated. The discipline of the Indian diaspora and the proactive support of Indian missions and community organisations was also widely noted. In contrast, the UAE has just imposed visa restrictions on Pakistan. EAM is expected to visit other Gulf kingdoms ins the coming weeks.