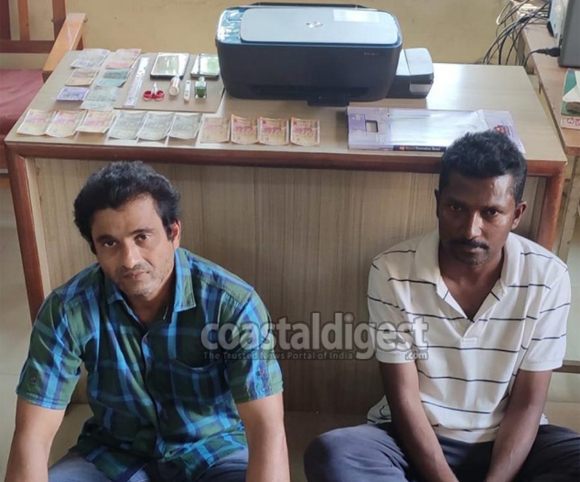 Mangaluru, Feb 28: Sleuths of Bajpe police station have busted a counterfeit currency racket and arrested two persons on charge of printing and circulating fake currency notes of Rs 500 and Rs 200.

The arrested have been identified as Dheerendra (45), a resident of Kanjilakody House in Bantwal taluk, and Sudheer Poojary (44), a resident of Adyar Volabail. Both of them said to be activists of Hindutva groups and had campaigned for BJP during last Lok Sabha polls.

Apart from counterfeit currencies, the cops have recovered a colour printer, two mobile phones and a motor bike from the accused.

According police, on February 23 the miscreants went to a petty shop owned by one Abdul Salam near Suralpady and purchased a Gillette blade costing Rs 20. They handed over Rs 200 currency note to Abdul Salam and took Rs 180 back from him.

However, the shop keeper grew suspicious about the genuineness of Rs 200 note. When he went in search of the duo, he came to know that they had purchased mustard seeds from a nearby provision store belonging to one Muhammad Arif. There too, they had handover Rs 200 fake note and got change.

The duo then took fake notes back from Abdul Salam and Muhammad Arif and escaped. The next day, Abdul Salam filed a complaint with Bajpe police station.