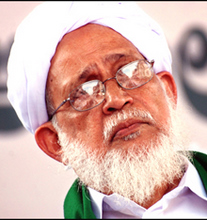 Kannur, July 24: The mysterious death of Chemibirikka-Mangalore Qazi CM Abdulla Moulavi was suicide, suggests the CBI report after 11 months of investigation. A report was last day submitted before the Chennai area Joint Director of the CBI, according to reports.

The local police that investigated the case initially and the Crime Branch which investigated for six months also had reached the same conclusion. The reports suggest that there was no evidence to prove it was a murder.

The dead body of CM Abdulla Moulavi was found in the sea near a big rock in Chembirikka in Kasargod early morning on February 15, 2010. His sandals and walking stick were found kept on the rock. The local police investigated the case for 16 days and reached the conclusion that he had committed suicide. Several factors led the local police to reach to the conclusion – a note about death was found from the Qazi's diary, he had bought a new lock for his room and had visited his father's burial place climbing 30 steps the day before death. The note found in his diary was reportedly the Malayalam translation of a few lines about death from the book 'Burda Baith'. The police came to such a conclusion but did not make it public, fearing people's reaction. The Crime Branch too said the same after doing a dummy test also in the same place where the dead body was found. The case was then handed over to the CBI.

The CBI reportedly also said that the Qazi was mentally and physically weak due to his health problems such as cancer for the liver etc. Treatments undertaken in several places such as Vellore were in vain and he even began meeting some people hoping to get relief. At last he resorted to suicide, says the CBI report.

However, those who counter the reports say that the aged Qazi who always has to use walking stick cannot climb on the top of the rock to jump to the sea. They say that a scholar like him did not have any necessity or situations to commit suicide. They also say that the local police was trying to write off the mysterious death as suicide to protect certain people's interests.

The Moulavi was a famous scholar and vice-president of the Samastha Kerala Jamiyathul Ulema (EK faction). The organisation's state leadership had last day protested against the different media reports that came suggesting that the Qazi had committed suicide.

Office-bearers of the SKSSF demanded that a special cell of the CBI should investigate the mysterious death of the Qazi. The organisation also held protest meetings against certain media reports referring to the CBI report that the Qazi had committed suicide.