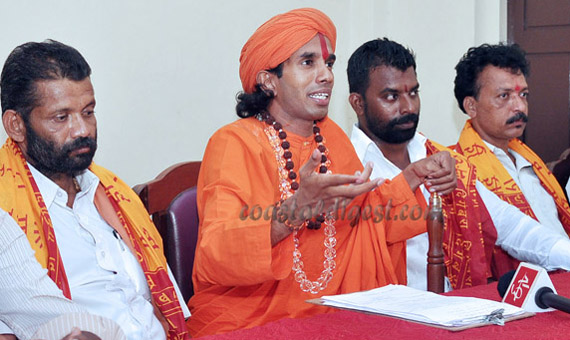 Mangalore, Nov 7: Criticising the state government led by Chief Minister Siddaramaiah for introducing'Shaadi Bhagya' scheme for poor brides belonging only to minority communities, the state unit of Akhila Bharata Hindu Mahasabha (ABHM) demanded that the scheme be also extended out to backward girls from the Hindu community in the state.

Speaking at a press conference here on Thursday, working president of Hindu Mahasabha state unit Swami Pranavanandaram said that the Shaadi Bhagya scheme was merely appeasement politics on the part of Chief Minister Siddaramaiah who ought to change his name to'Maulana alias Siddeeq Siddaramaiah'.

If the scheme is not extended to poor girls from the Hindu community, Hindu youth will be instigated to woo and marry Muslim girls, he said, adding that the Hindu Mahasabha would provide marriage certificates as well as protection, if such marriages took place in the future.

He also said that the bill proposed by Siddaramaiah which aimed at curtailing the traditional rituals and practices of saints and Sadhus in the name of superstitions should be immediately recalled. If not, the chief minister and the Congress government will be directly responsible for the unrest it would cause in the state in the coming days, he warned.

Speaking on the stampede that broke out during the annual pilgrimage in Sabarimale, Kerala in 2011 killing 110 pilgrims, he alleged that the unfortunate accident had terror suspect Yasin Bhatkal's involvement in it. There is suspicion that the stampede was triggered by associates of Yasin Bhatkal who had arrived at the scene in jeep bearing Karwar registration number, he claimed.

Swami Pranavanandaram also alleged that police officials of the higher rank were working in favour of'terrorist organisations' and had booked cases against sadhus in connection with'khadga dikshe' programme that had been announced earlier by Hindu Mahasabha. A convention will be held soon by the organisation in Mangalore, and an intense struggle will be taken up in this regard, he told mediapersons.

On the Saujanya rape and murder case, he said that the Hindu Mahasabha had no objection to CBI probe in the case. “However, the name of holy Kshetra Dharmasthala and Heggade family should not be maligned,” he said.